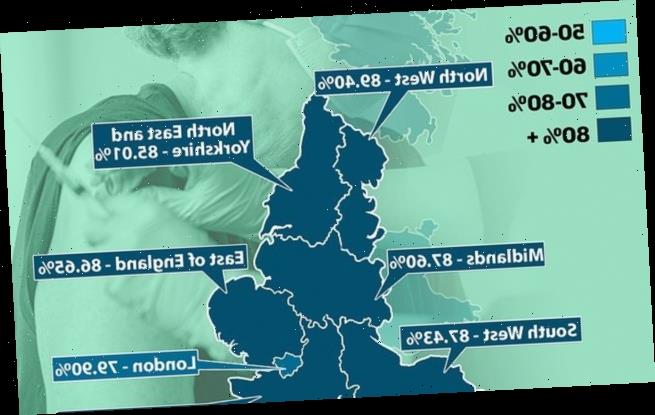 Is YOUR area winning England’s Covid vaccine race? Somerset and Derbyshire lead the pack with almost 95% of their over-70s given at least one dose… but parts of London see just 75% uptake (so use our tool to see how well your region is doing)

Parts of England have already dished out Covid vaccines to nearly 95 per cent of their over-70s, official figures revealed today as the NHS races toward its goal of jabbing the top four priority groups by Monday.

The NHS England statistics, which go up to February 7, show Somerset had given at least one dose to 93.4 per cent of all of its over-70s. Derbyshire was second, with 92.5 per cent of people above that age having received their first shot of either Pfizer’s of Oxford University’s vaccine.

The figures, which split England up into 40 areas where local NHS divisions operate, found another five areas had given the injection to more than nine in 10 of over-70s. They are: Cambridgeshire and Peterborough; Lancashire and South Cumbria; Bristol, North Somerset and South Gloucestershire; Coventry and Warwickshire; and Herefordshire and Worcestershire.

But the figures suggest the roll-out has been somewhat of a postcode lottery, with just 76.3 per cent of the age bracket in east London being given their first dose, for example. In the North of the capital, uptake was not much higher at 78.2 per cent and in North West London it was similarly low, at 78.4 per cent.

There have been reports of GP surgeries in London having to close early because not enough people have been turning up to get their injection. Health chiefs fear vaccine hesitancy among black, Asian and ethnic minority (BAME) groups is behind the poorer uptake in London’s culturally diverse boroughs.

The figures do not take into account health and social care staff or extremely clinically vulnerable younger people, such as those with terminal illnesses, who are both also at the top of the vaccine priority list. Instead, it just looks solely at over-70s, who are most at risk of dying from the illness.

It comes as the Department of Health announced another 450,810 vaccine doses were administered yesterday, taking the total number of people to be immunised to 13,509,108. The NHS must reach just 1.5million more people over the next four days – an average 375,000 per day – to hit its target of 15m by Monday.

Ministers are frantically hunting for those vulnerable Britons who have not yet come forward for their jab, warning that having large numbers of unprotected people could delay the easing of lockdown. 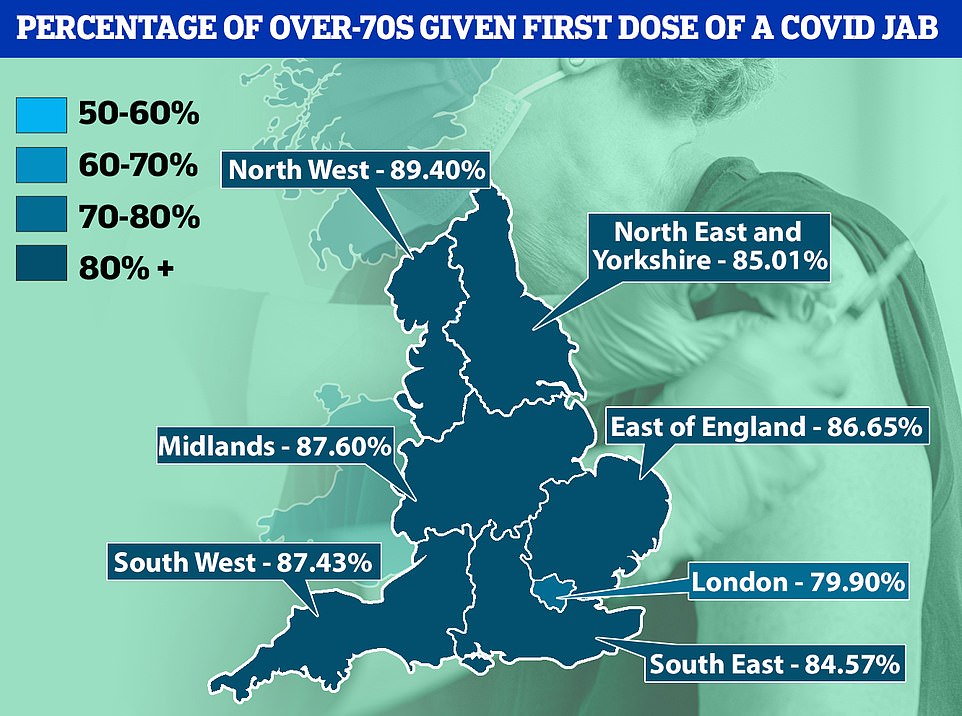 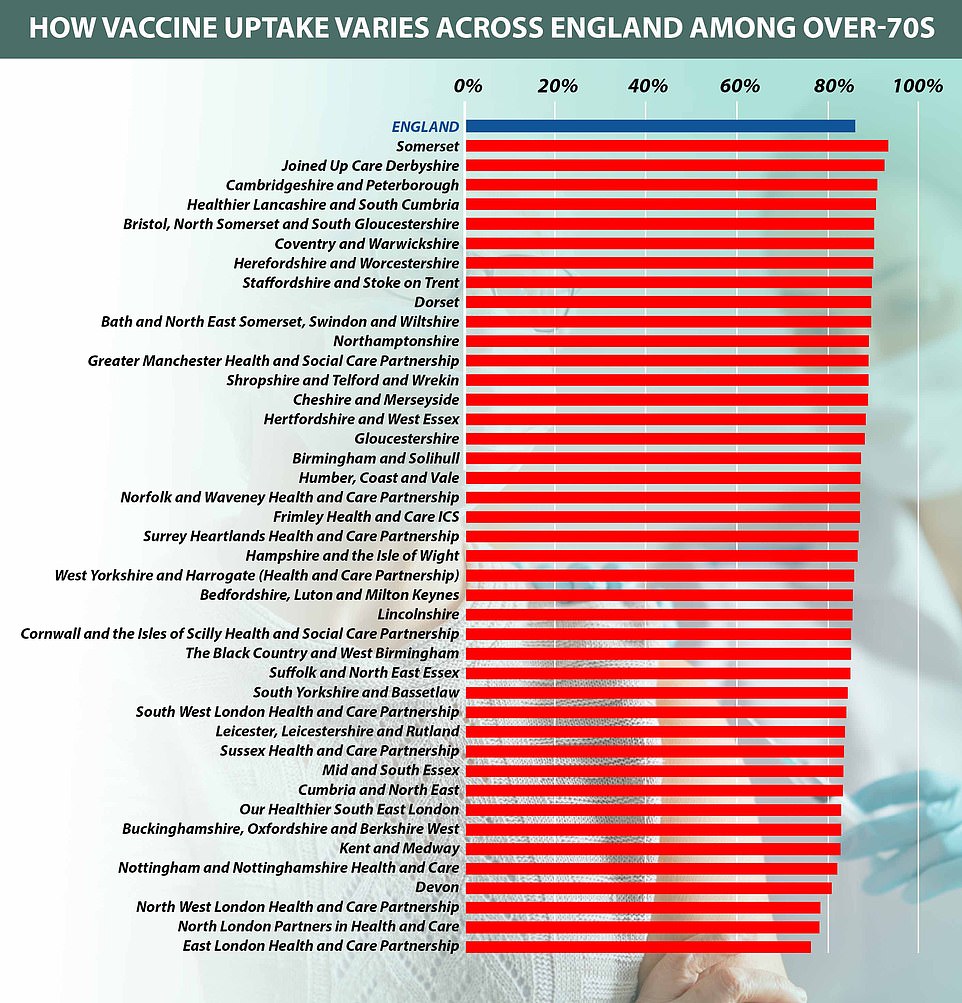 The NHS England statistics, which go up to February 7, show Somerset had given at least one dose to 93.4 per cent of all of its over-70s. Derbyshire was second, with 92.5 per cent of people above that age having received their first shot of either Pfizer’s of Oxford University’s vaccine 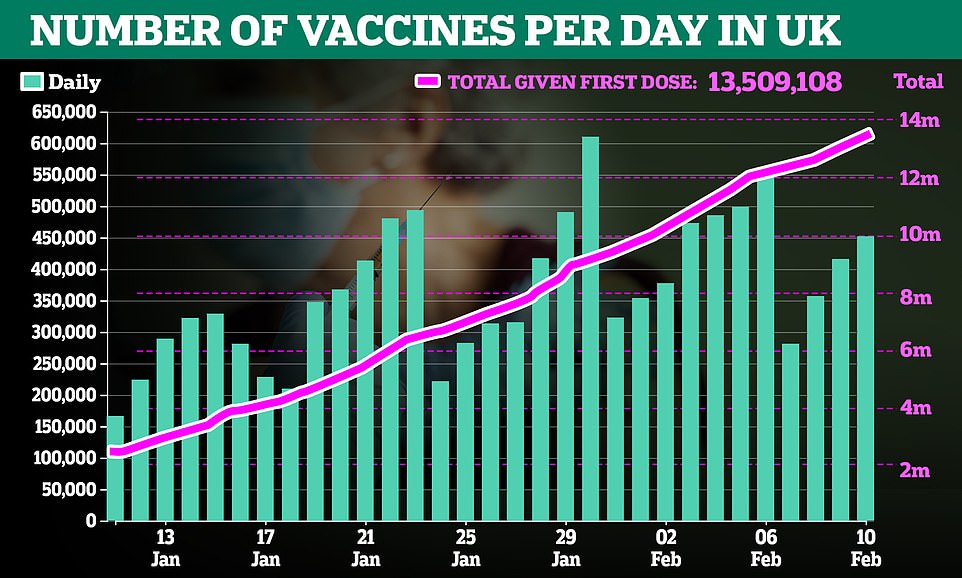 WHICH AREAS HAVE GIVEN THE MOST AND LEAST VACCINES TO THE OVER-70S?

WHICH AREAS HAVE GIVEN THE MOST AND LEAST DOSES TO THE OVER-80S?

There are concerns that social care workers are more reluctant to come forward or have been missed because of shift patterns and that some elderly people are having trouble booking appointments or reaching vaccination centres.

GPs are now being paid commission to inoculate the housebound in their homes and family doctors are being urged to make personal calls to all their older patients who have not received their injection.

Roving teams will hunt for care home staff who have been missed and drive-through centres have been set up to give them a more flexible way to get their jab without leaving their cars.

Meanwhile, data suggests up to twice as many BAME Brits are turning down the vaccine compared to white people, which is believed to be due to a mistrust in Government.

The NHS is working with local faith and community leaders to tackle vaccine hesitancy and counter anti-vaxx propaganda online.

Sir Paul Nurse, director of the Francis Crick Institute in London, claimed hundreds of volunteers have been left ‘standing around with little to do’ at his centre’s make-shift clinic, forcing them to close at weekends. 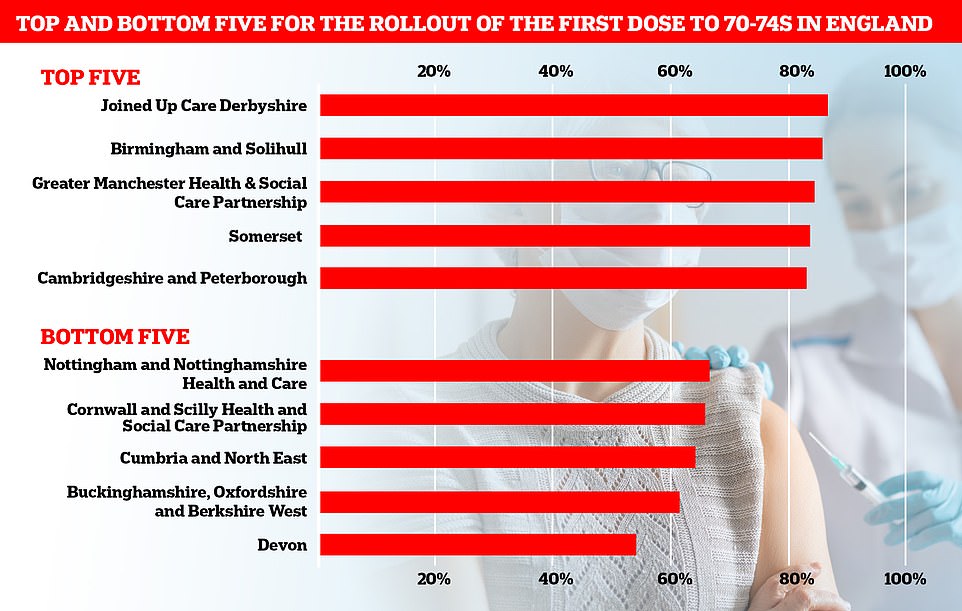 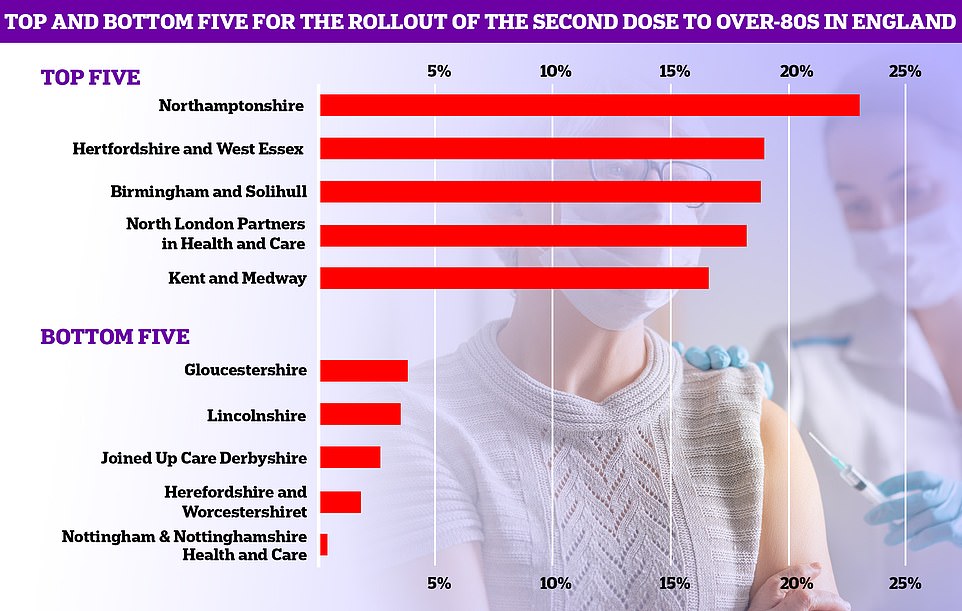 The 72-year-old said they were ‘not alone’, however, and that other hubs across the capital were running low on patients to vaccinate.

Writing in a piece for The Times urging the UK to speed up the vaccination roll-out, he questioned whether ‘adherence to moving through the priority groups’ was so ‘rigid’ that it was slowing progress.

Sir Paul also asked whether officials were purposely limiting appointments in some areas to ‘ensure every part of the country progresses at the same rate’ and to ‘avoid criticism of a postcode lottery’.

Some areas of the country leading the way in the vaccine roll-out have taken it on themselves to start jabbing under-70s — including in Manchester and London.

But No10 has not officially given local health teams the green light to move onto the next stage of the roll-out, which includes everyone else above the age of 50.

Critics yesterday said the UK’s roll-out had ‘hit a wall’ and urged the Government to expand jabs to a wider audience to reach six million people a week.

This would allow centres to prioritise other important groups including teachers, police officers and firefighters to receive jabs when slots remain vacant.

He said it is important to act soon because ‘every day that is missed costs lives and livelihoods’.