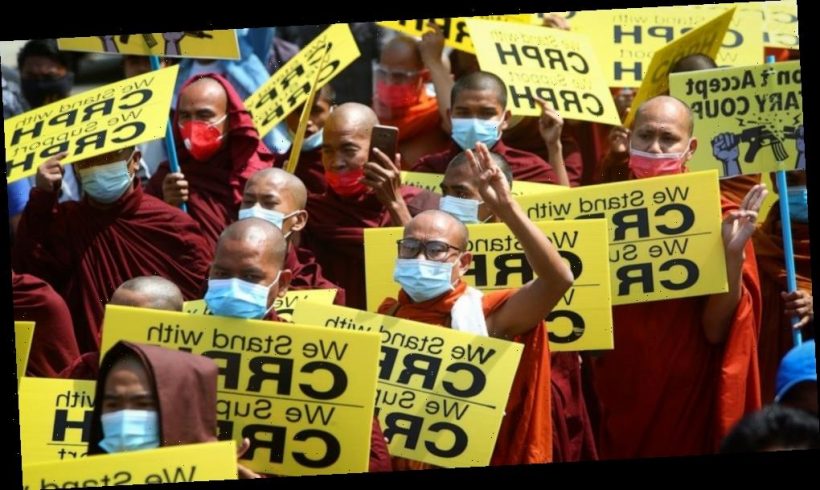 The protesters in Yangon were chased as they tried to gather at their usual meeting spot at the Hledan Center intersection. Demonstrators scattered and sought in vain to rinse the irritating gas from their eyes, but later regrouped.

The coup reversed years of slow progress toward democracy in Myanmar after five decades of military rule. It came Feb. 1, the same day a newly elected Parliament was supposed to take office. Ousted leader Aung San Suu Kyi’s party would have led that government, but instead she was detained along with President Win Myint and other senior officials.

The army has leveled several charges against Suu Kyi — an apparent effort by the military to provide a legal veneer for her detention and potentially to bar her from running in the election the junta has promised to hold in one year. On Monday, Suu Kyi made a court appearance via videoconference and was charged with two more offenses, her lawyer Khin Maung Zaw told reporters.

Accused of inciting unrest, she was charged under a law that dates from British colonial days and has long been criticized as a vaguely defined catch-all law that inhibits freedom of expression. That charge carries a maximum sentence of two years in prison. The other charge from Monday carries a one-year sentence.

Following her detention on the day of the coup, the 75-year-old Suu Kyi was initially held at her residence in the capital of Naypyitaw, but members of her National League for Democracy party now say they don’t know where she is.

Since the takeover, a movement of protests in cities across the country has been growing — and the junta’s response has become increasingly violent.

The U.N. said it had “credible information” that at least 18 people were killed and 30 were wounded across Myanmar on Sunday. Counts from other sources, such the Democratic Voice of Burma, an independent television and online news outlet, put the death toll in the 20s.

Any of the reports would make it the highest single-day death toll since the military takeover. The junta has also made mass arrests, and the independent Assistance Association for Political Prisoners reported that as many as 1,000 people were detained Sunday, though it has only confirmed 270 of those. Several journalists have been among those detained, including one for The Associated Press.

At least five people are believed to have been killed Sunday in Yangon when police shot at protesters, who have remained non-violent despite provocation from the security forces and pro-military counter-demonstrators.

People erected makeshift sidewalk shrines Monday at the spots where several of the victims were shot and also paid their respects by standing outside the hospitals where the bodies were being released to families.

In Dawei, a small city in southeastern Myanmar where an estimated five people were killed Sunday, the number of protesters on the streets Monday was lower than usual. Marchers there split into smaller groups, parading through the city to the applause of bystanders who also made the three-finger salutes adopted by the resistance movement to show their support.

Confirming the deaths of protesters has been difficult amid the chaos and general lack of news from official sources, especially in areas outside Yangon, Mandalay and Naypyitaw. But in many cases, there was evidence posted online such as videos of shootings, photos of bullet casings collected afterwards and gruesome pictures of bodies.

In a statement published Monday in the state-run Global New Light of Myanmar newspaper, Myanmar’s Foreign Ministry declared that the junta “is exercising utmost restraint to avoid the use of force in managing the violent protests systematically, in accordance with domestic and international laws in order to keep minimum casualties.”

But U.N. Secretary-General Antonio Guterres strongly condemned the crackdown, calling the use of lethal force against peaceful protesters and arbitrary arrests “unacceptable,” and expressed serious concern at the increase in deaths and serious injuries, said U.N. spokesperson Stephane Dujarric.

“What the world is watching in Myanmar is outrageous and unacceptable,” the U.N.’s independent expert on human rights in Myanmar, Tom Andrews, said in a separate statement. “Words of condemnation are necessary and welcome but insufficient. The world must act. We must all act.”

He proposed that countries could institute a global embargo on the sale of arms to Myanmar, “tough targeted and coordinated sanctions” against those responsible for the coup, the crackdown and other rights abuses, and sanctions against the business interests of the military.

Social media posts from Myanmar have increasingly urged the international community to invoke the doctrine of the “responsibility to protect” to intervene directly to restrain the junta.

Any kind of coordinated measures, however, would be difficult to implement as two permanent members of the U.N. Security Council, China and Russia, would almost certainly veto them on the basis of being opposed to interference in the internal affairs of other countries.

In Washington, White House National Security Adviser Jake Sullivan issued a statement saying the U.S. is “alarmed” by the violence and stands in solidarity with Myanmar’s people, “who continue to bravely voice their aspirations for democracy, rule of law, and respect for human rights.”

Washington has imposed sanctions on Myanmar because of the coup, and Sullivan said it would “impose further costs on those responsible,” promising details “in the coming days.”

Among the arrests made Sunday, the independent Assistance Association for Political Prisoners was able to identify about 270 people, bringing to 1,132 the total number of people the group has confirmed being arrested, charged or sentenced since the coup.

The AP called for his immediate release.

“Independent journalists must be allowed to freely and safely report the news without fear of retribution. AP decries in the strongest terms the arbitrary detention of Thein Zaw,” said Ian Phillips, the AP’s vice president for international news. The Foreign Correspondents’ Club of Myanmar also condemned the arrest.