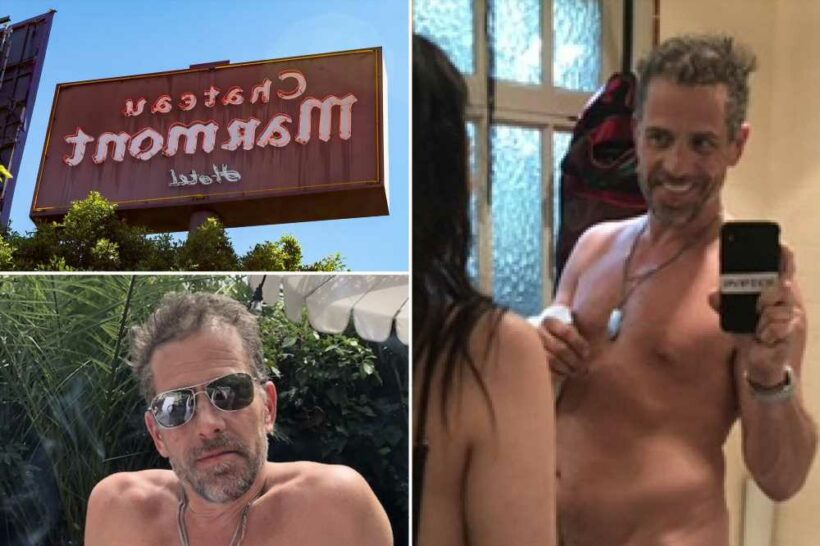 It’s May 2018, and Robert Hunter Biden is trawling through his favorite Los Angeles escort sites. He orders “Yanna,” a 24-year-old Russian native from Emerald Fantasy Girls.

“Russian, Green Eyes, Thin Brunette, an elite courtesan,” is Yanna’s pitch, along with a menu of sex acts.

“Hi, My name is Rob. I’m staying at Chateau Marmont. Are you available now?”

All of these messages, all of these pictures, are saved on Hunter Biden’s laptop, which he treats like a diary, storing every e-mail and text conversion, his financial records, and his copious selfies. A year later, Hunter will forget the laptop at a Delaware repair shop, and it will end up in the hands of the FBI — and The Post.

Hunter’s escapades with Yanna are a glimpse into the president’s son debauched lifestyle, but it also raises questions about how much his finances were mingled with Joe Biden. As detailed in Hunter’s own text messages, two mysterious men would show up soon after Yanna left, asking curious questions.

Yanna stays for a couple days and wants to be paid. The problem is Hunter’s debit cards aren’t working and she’s not leaving without the $8,000 he owes her for the extended callout. On the morning of May 24, hung over and out of sorts, Hunter adds a new recipient on the cash transfer app Zelle, a woman named Gulnora, the registered agent for Emerald Fantasy Girls and Yanna’s employer.

He transfers $8,000. It doesn’t work. A few minutes later, Wells Fargo sends him a fraud detection alert. He reaches into his wallet and pulls out a card. Yanna attempts to transfer the $8,000 but it apparently doesn’t go through. He rifles through his wallet again. No luck. He pulls out another card. Bingo.

Soon enough, his cell phone starts pinging. It’s Yanna: “There is many transactions on my account,” she texts. “From last night 8k, 8k, 3500k. So get back with me when you can. So I can transfer back to you. Better if you call my personal.”

She follows up: “I’m happy to see that much in my account.” Her last text: “No worries you can have the rest back. Karma is a bitch.”

Text messages indicate most of the money was returned over the next week. But on June 12, Gulnora texted Hunter that she could not transfer the remaining $5,000 because of problems with her bank account. “Bulls–t,” replied Hunter. “I am so sick of this.”

What happens between Hunter and Yanna next is not recorded. Yanna’s private cell phone number no longer works, and Emerald Fantasy Girls is defunct. Cris Armenta, an attorney for Yanna, declined to comment. Hunter Biden’s attorney did not return a message.

What we do know from the laptop is that a few hours after Hunter’s debit-card woes began, text messages start arriving that are labelled as being from Robert Savage III. Savage was once the Secret Service’s special agent in charge of the Los Angeles field office and a contact card for him appears on the laptop, with a photographic avatar, phone number and Secret Service email address.

The Secret Service told The Post that Savage retired from the agency on April 30, 2018 — weeks before the Biden debauchery — and that the agency “did not provide protection to any member of the Biden family in 2018.”

Savage’s lawyer says, “My client has never met or communicated with Hunter Biden and has never been to the Chateau Marmont and had not even heard of the hotel. In fact, my client was retired before the date of these fabricated text messages.”

The activity recorded on Hunter’s devices shows Savage sending Hunter an urgent missive on May 24 at 6:37 p.m.:“H – I’m in the lobby come down. Thanks, Rob.”

Five minutes later Savage texts again: “Come on H, this is linked to Celtic’s account. DC is calling me every 10. Let me up or come down. I can’t help if you don’t let me H.”

“Celtic” was Joe Biden’s Secret Service code name when he was vice president.

Did one of the credit cards used to pay Yanna belong to Joe Biden? Was it a shared account?

Hunter replies: “I promise be right down. Sorry.”

Five minutes later, Savage texts Hunter again to say that Dale Pupillo, a retired deputy assistant director of the Secret Service, who used to guard his father, has arrived. Invoices indicate that Pupillo did background checks for Hunter on potential business partners. Pupillo did not return requests for comment.

“He’s going to front desk, call and tell them to give us a key now H.

“As your friend, we need to resolve this in the immediate.

“Call the front desk now H or I will have to assume you are in danger and we will have to make them give us the keys.”

For nine minutes Hunter does not reply.

“Really, Rob I am coming down right now,” Hunter texts at 6:54 p.m. “I really promise. Was in the bathroom buddy. Coming right this second. ”

What these apparent minders told Hunter next isn’t recorded on his devices. We know Hunter stays up the rest of that night, logging into an encrypted government site, “secure.login.gov,” a number of times until 4:04 a.m.

In his memoir “Beautiful Things,” Hunter admits the crack cocaine bender consumes most of his 2018. It even gets him blacklisted from the Chateau Marmont. Late at night, on Thursday, July 19, 2018, Hunter is checking in at the front desk of the iconic Sunset Boulevard hotel, where John Belusi famously overdosed and Led Zeppelin threw ragers.

The night manager is about to hand over the familiar green silk-tassled set of room keys when he notices a warning note on Hunter’s file in the computer system. It stipulates the need to get pre-approval from the general manager before checking in.

“WTF man. Seriously WTF,” Hunter rages in a series of indignant texts with Chateau bellhop the next night. “Seriously . . . a note in the system that says under no circumstances am I allowed in the building without her pre-approval. WTF man.”

Mike replies: “That’s f–ked, let me text someone.” Mike texts back a few minutes later: “Apparently you were banned for ‘drug use’ is what I was just told, which is bulls–t.”

Miranda Devine’s book, “Laptop from Hell: Hunter Biden, Big Tech, and the Dirty Secrets the President Tried to Hide,” comes out in September.