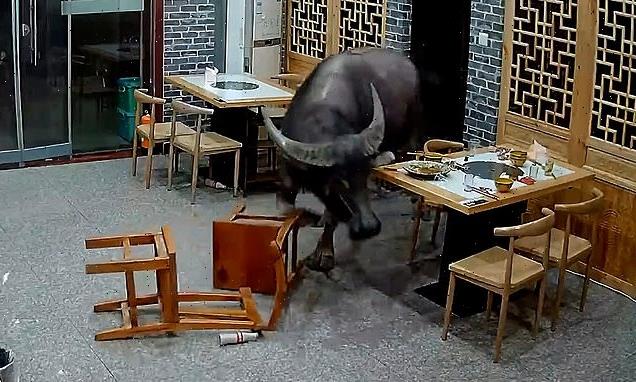 Bull-dozed! Moment escaped buffalo bursts into restaurant and tosses man in the air in Chinese city

This is the moment a runaway buffalo smashed its way into a restaurant and threw a man into the air in eastern China.

Video filmed in the city of Taizhou in Jiangsu Province on December 31, shows the animal charging into the restaurant, ramming into a man and knocking him over.

The stricken man, who suffered injuries to his leg, was dragged to safety by his friend while the bull rampaged around the restaurant, overturning tables and chairs before eventually running away. 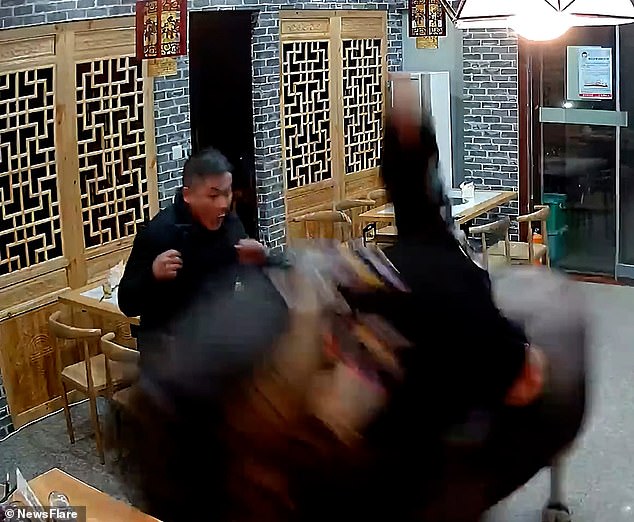 Video footage captured the moment a man was thrown into the air by a rampaging buffalo at a restaurant in the city of Taizhou in Jiangsu Province, China, on December 31 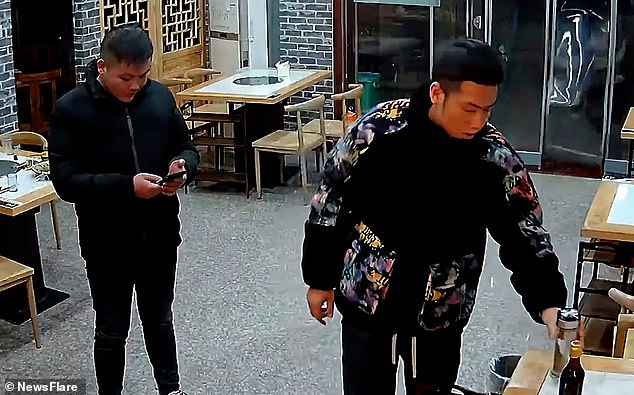 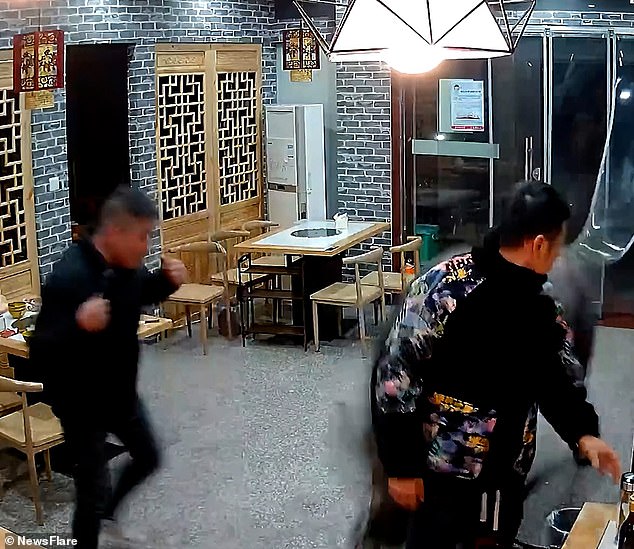 The footage shows two men – one drinking and another on their phone – standing inside the restaurant seconds before the animal appears behind plastic screens at the front of the building.

The huge buffalo charges straight at the man wearing a brightly patterned jacket who had been drinking moments before.

The animal lowers its horns and tosses him off his feet. After he is slammed to the floor, his shocked friend rushes over and drags him to the side, away from the rampaging bull.

For a few seconds, the buffalo remains off camera but banging and crashing can be heard before it returns to the front of the restaurant.

With rope hanging from its mouth after it reportedly escaped from a butcher’s shop moments before it was to be slaughtered, the bull walks around the restaurant and looks out of the window for a few moments.

It then turns and walks into an adjoining room in the restaurant where more banging and crashing can be heard.

Tables and chairs are seen being thrown around the room before the buffalo smashes its way back into the main section of the shop.

After a few seconds staring out of the door, the bull eventually dashes through the plastic screens and runs away.

Moments later, the man’s friend is seen running out of the shop for help and then returns with a number of people who inspect the damage and check on the injured man.

The man suffered injuries to his leg and was taken to hospital for further treatment.