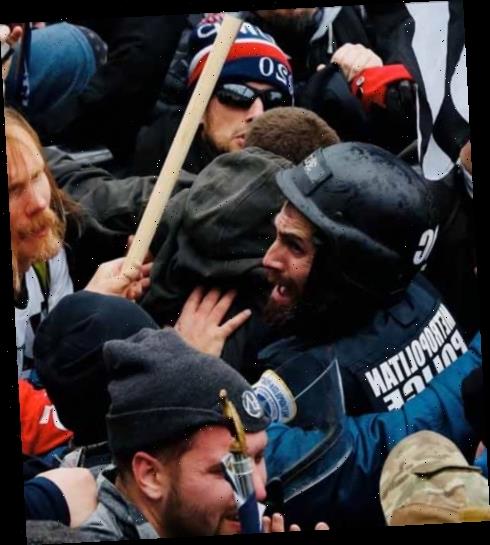 The FBI on Sunday appealed to the public for help in identifying suspects accused of assaulting D.C. Metropolitan Police Officer Michael Fanone, who the department says suffered a mild heart attack when he was repeatedly beaten and Tasered by attackers at the U.S. Capitol.

The DC Police Department tweeted a photograph taken from video showing Fanone – wearing his uniform and a helmet – screaming for help while surrounded by a crowd of rioters outside the Capitol building.

Fanone, who said in a recent on-camera interview that he heard people screaming to kill him with his own gun, was at the west front entrance of the Capitol as rioters forced their way into the building and eventually pushed him out into the crowd on the steps.

“Officer Fanone suffered a mild heart attack when he was repeatedly beaten & tased by his attackers during the Jan 6th insurrection. We need your help finding them!!” D.C. Police tweeted Sunday, sharing an FBI flyer asking for the public’s help in identifying individuals accused of making unlawful entry into the U.S. Capitol building and assaulting federal law enforcement personnel on Jan. 6.

Fox News has reached out to the D.C. Police Department with a request for comment on this story.

“Some guys started getting ahold of my gun and they were screaming out, ‘Kill him with his own gun,’” Fanone said in an on-camera interview with CNN last week, recalling what happened on Jan. 6.

“At that point it was just self-preservation, like how do I survive this situation. I thought about using deadly force, I thought about shooting people,” he said. “And then I just came to the conclusion that if I were to do that, I might get a few but I might not get everybody and they might take my gun away from me, and that would definitely give them the justification they were looking for to kill me.

“The other option I thought of was try to appeal to somebody’s humanity, and I just remember yelling out that I have kids, and it seemed to work. Some people in the crowd started to encircle me and try to offer me some level of protection. A lot of people have asked me my thoughts on the individuals in the crowd that helped me or tried to offer some assistance, and I think the conclusion I’ve come to is like ‘Thank you, but f— you for being there.’”

A total of five people were killed from the riot, including U.S. Capitol Police Officer Brian Sicknick, who died at the hospital the next day from injuries sustained when he was struck in the head with a fire extinguisher while physically engaging with protesters, officials said.