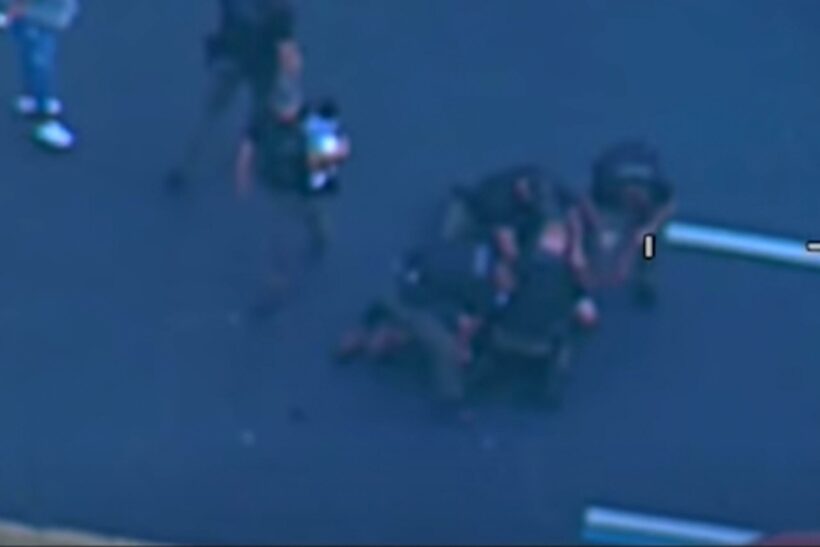 A Florida man tossed a 2-month-old baby at a sheriff’s deputy after he took police – and the child – on a high-speed chase through residential neighborhoods, authorities said.

John Henry James III, 36, is facing a slew of charges including aggravated child abuse after a 40-minute drive on May 26 when he tried to shake Indian River County sheriff’s deputies with the kid in the car.

“You can’t throw a baby at us and expect us to treat you with kid gloves,” Sheriff Eric Flowers said in a news release posted to Facebook on Friday.

The sheriff’s office posted edited dashcam and helicopter video of the chase and James struggling as deputies try to cuff him while one deputy holds the baby.

The actual baby toss is not visible in the footage.

Deputy Jacob Curry, who caught the baby after the chase, described the throw as “overhand” and called the situation awkward.

“I’ve seen some crazy stuff but this is definitely up there,” Curby told CBS News 12. “It wasn’t a nice underhand handoff from a foot away, it was a throw.”

“I couldn’t chase him, I couldn’t tackle him, not a whole lot I can do because he had the baby,” Curby added.

At around 6:30 p.m. a deputy tried to pull over James in Vero Beach, but he sped off and refused to pull over. Video shows him driving his white SUV into a police vehicle, dodging roadblocks and even running over a set of “stop sticks” that don’t disable his vehicle.

He speeds near pedestrians during the chase, prompting deputies to turn off their sirens and back off while the office’s helicopter tracks him from above.

“There’s people everywhere on the street down here,” a deputy is heard saying in the video.

Deputies follow him to an apartment complex and block the entrance as James ditches the car and tries to get away on foot, allegedly with the baby in his arms.

A woman is heard on the video saying he’s got a baby.

James struggles with cops as they try to detain him and a crowd forms in the parking lot.

The accused was treated in a hospital when he complained about not being able to breathe, but police said he continued to resist as he was put in a stretcher.

He is now being held without bond and facing felony charges of aggravated battery on an officer/firefighter/EMT, reckless driving and resisting arrest.