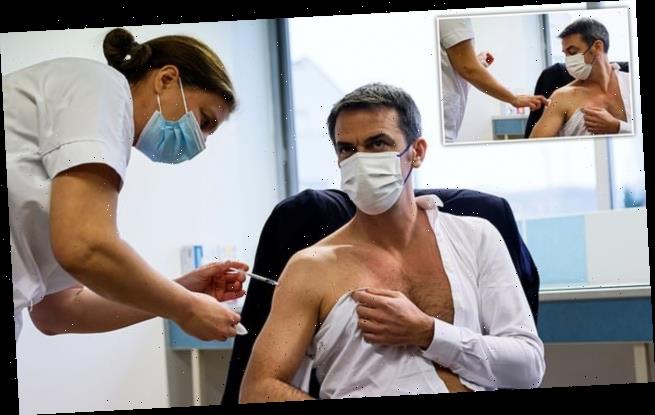 French health minister Olivier Veran has received the AstraZeneca Covid-19 vaccine today as he praised the jab for providing sufficient protection against ‘nearly all the variants’ of the coronavirus.

Veran was seen on French television with his shirt off while being inoculated at a vaccination centre in the city of Melun near Paris.

It comes after South Africa has halted use of AstraZeneca’s Covid shot in its vaccination programme amid fears that it gave minimal protection against mild-to-moderate infection caused by the country’s dominant coronavirus variant. 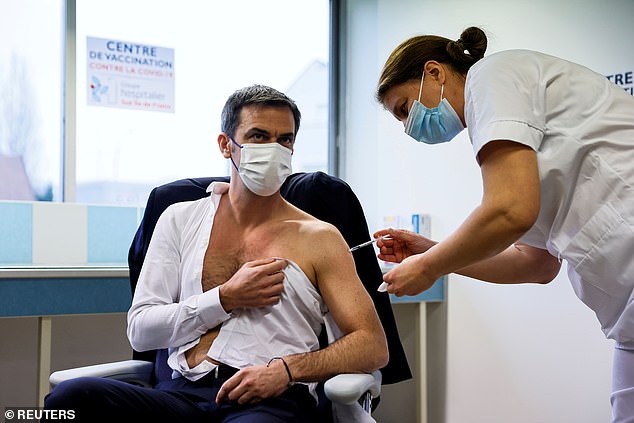 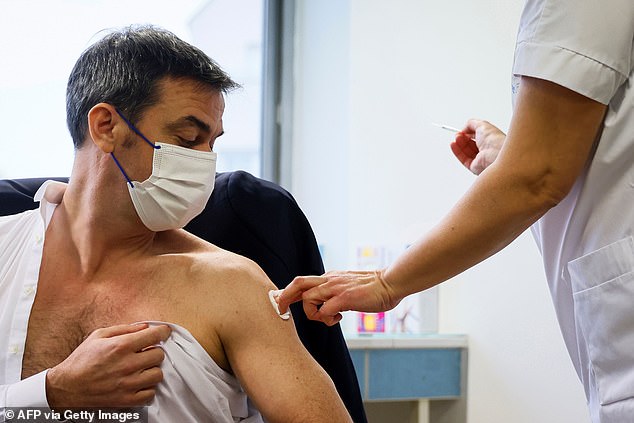 Pictured, Veran was seen on French television with his shirt off while being inoculated with a dose of the AstraZeneca-Oxford Covid-19 vaccine at a vaccination centre in Melun near Paris

But Veran reassured the French public and showed his support for the AstraZeneca jab on Monday.

He told reporters: ‘The AstraZeneca vaccine reinforces and amplifies our vaccination strategy.

‘We do our best to prevent the spread of variants,’ he added.

A British junior health minister said there was no evidence that the AstraZeneca vaccine did not prevent death or serious illness, and added South Africa had only imposed a temporary halt on using the vaccine.

South Africa is suspending the start of its Covid-19 vaccinations with the AstraZeneca jab after a study showed the drug failed to prevent mild and moderate cases of the virus variant that has appeared in the country.

Africa’s hardest-hit nation was due to start its campaign in the coming days with a million doses of the vaccine developed by AstraZeneca and Oxford.

The suspension marks an important setback for the country, but officials said vaccine deliveries from other producers would soon be available and allow the campaign to move forward.

‘It’s a temporary issue that we have to hold on AstraZeneca until we figure out these issues,’ Health Minister Zweli Mkhize told reporters during a virtual press conference.

The special infection unit in the city of Tshwane, South Africa pushes a man showing symptoms of Covid-19 inside an ambulance 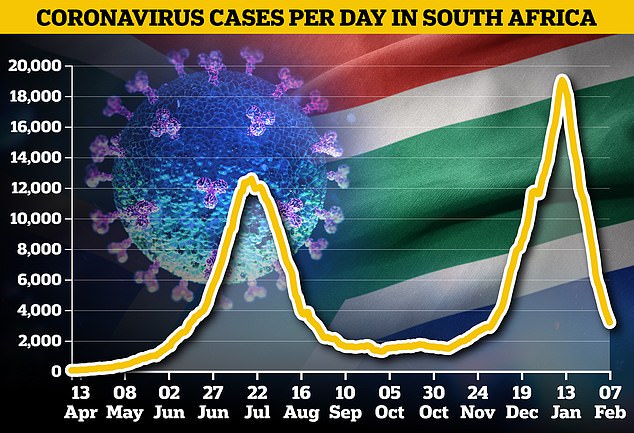 Coronavirus cases have fallen in South Africa after reaching an alarming new peak in January, but the country’s mutant strain continues to cause concern at home and abroad 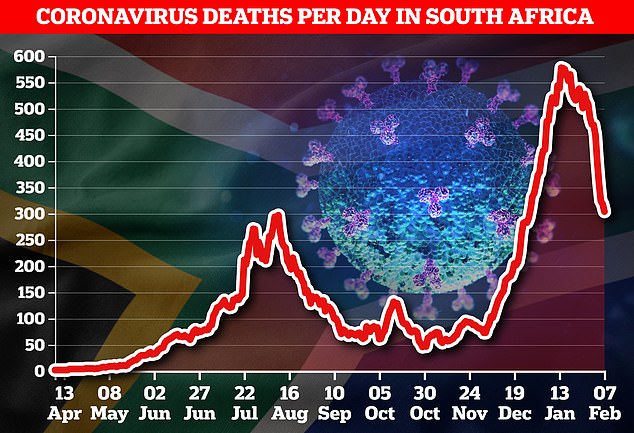 Daily deaths from Covid-19 have also fallen, but are still slightly higher than they were at the peak of the first wave – with 46,290 having died in all

The University of Witwatersrand, Johannesburg, which conducted the trial, said in a statement on Sunday that the AstraZeneca vaccine ‘provides minimal protection against mild-moderate Covid-19 infection’ from the South African variant.

But in a full paper due to be published on Monday, AstraZeneca said that none of the 2,000 participants developed serious symptoms.

That could mean it will still have an effect on severe illness, although not enough data is available yet to make a definitive judgment.

Lagging behind in the global vaccination race, South Africa received its first delivery of a million doses on Monday.

An additional 500,000 doses are expected this month.

All are AstraZeneca vaccines produced by the Serum Institute of India, and some 1.2 million health workers were to be first in line for the shots.

‘In the next four weeks, we will have the J&J and Pfizer,’ said Mkhize, referring to vaccines made by Johnson & Johnson and Pfizer/BioNTech.

Discussions with other vaccine producers are also ongoing, particularly Moderna and the makers of the Russian Sputnik V jab.

The 1.5 million AstraZeneca vaccines obtained by South Africa, which will expire in April, will be kept until scientists give clear indications on their use, he said.

‘The second generation of the vaccine to fight all variants will take longer to produce,’ said Salim Abdool Karim, epidemiologist and co-chair of the scientific committee at the South African health ministry. 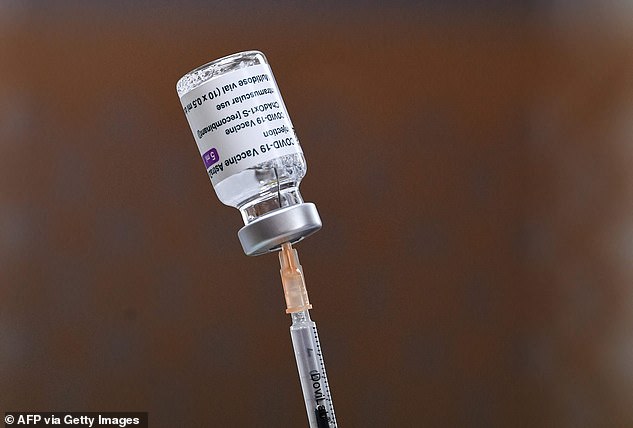 Pictured: A health worker prepares the AstraZeneca/Oxford vaccine at the Mignot Hospital in Le Chesnay near Paris

South Africa plans to vaccinate at least 67 per cent of its population by the end of the year, or around 40 million people.

The country has recorded nearly 1.5 million infections and more than 46,000 deaths from the virus.

The AstraZeneca study data, which has not yet undergone peer review, ‘appear to confirm the theoretical observation that mutations in the virus seen in South Africa will allow ongoing transmission of the virus in vaccinated populations’, it said.

‘Protection against moderate-severe disease, hospitalisation or death could not be assessed in this study as the target population were at low risk.’

But the vaccine developers in Britain said informally that the results offered some hope that the shots could prevent deaths from the variant.

‘We may not be reducing the total number of cases but there is still protection against deaths, hospitalisations and severe disease,’ said Sarah Gilbert, who led the development of the vaccine with the Oxford Vaccine Group.

It could also be ‘some time’ before they determine its effectiveness for older people in fighting the strain, she told BBC television.

AstraZeneca told AFP that ‘we do believe our vaccine will still protect against severe disease.

‘Neutralising antibody activity is equivalent to other Covid-19 vaccines that have demonstrated activity against more severe disease, particularly when the dosing interval is optimised to 8-12 weeks,’ added the spokesperson.

Researchers are currently working to update the vaccine, and ‘have a version with the South African spike sequence in the works’ that they would ‘very much like’ to be ready for the autumn, she added.