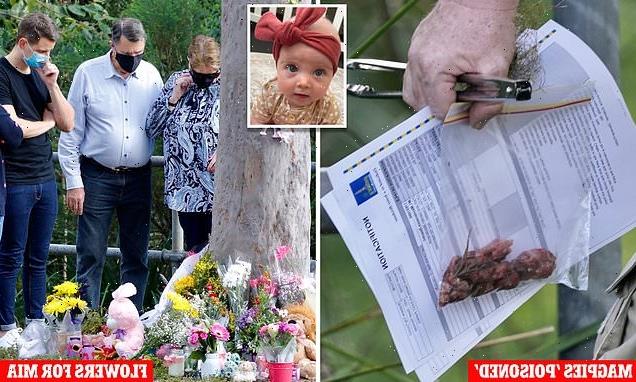 EXCLUSIVE: Furious local vigilantes try to POISON aggressive magpies in park where baby Mia tragically died in a swooping attack – as her devastated family lay tributes at the scene

Vigilantes are laying poison for magpies in a local park where a baby girl died in a tragic swooping incident.

Five-month-old Mia died from a head injury in Queensland’s Children hospital after her mum Simone dropped her while being attacked by a notoriously aggressive magpie in Glindemann Park at Holland Park West in Brisbane on Sunday.

Daily Mail Australia has seen a council memo recording details of a call from a member of the public, saying locals are trying to kill the park’s aggressive birds by laying poisoned food.

Officers were also seen carrying away what looked like pieces of meat from the park after inspecting nests, taken as evidence in plastic bags.

The park was also visited by little Mia’s devastated family, who laid flowers and soft toys in tribute to the infant. 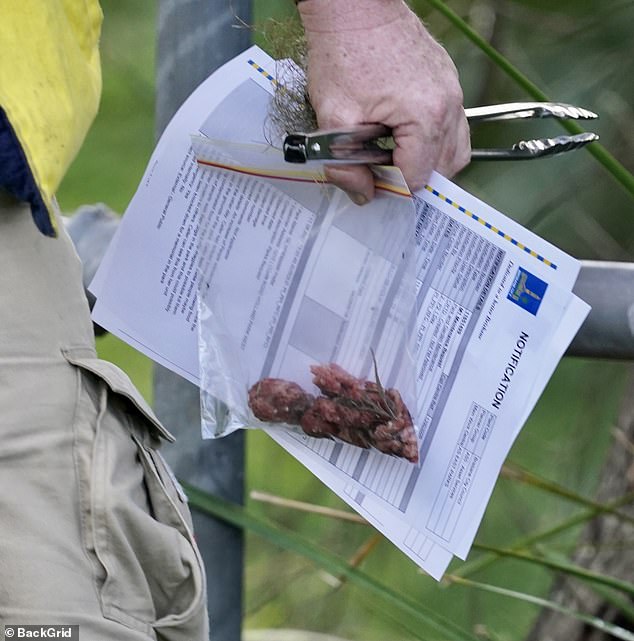 Vigilante residents are understood to be laying poison for magpies in a local park where a baby girl died in a tragic swooping incident. A woman living near Glindemann Park, Brisbane, where toddler Mia died after her mum was swooped by a magpie, reported people laying contaminated food in the park. Pictured is a council investigator with a bag containing food found in the park 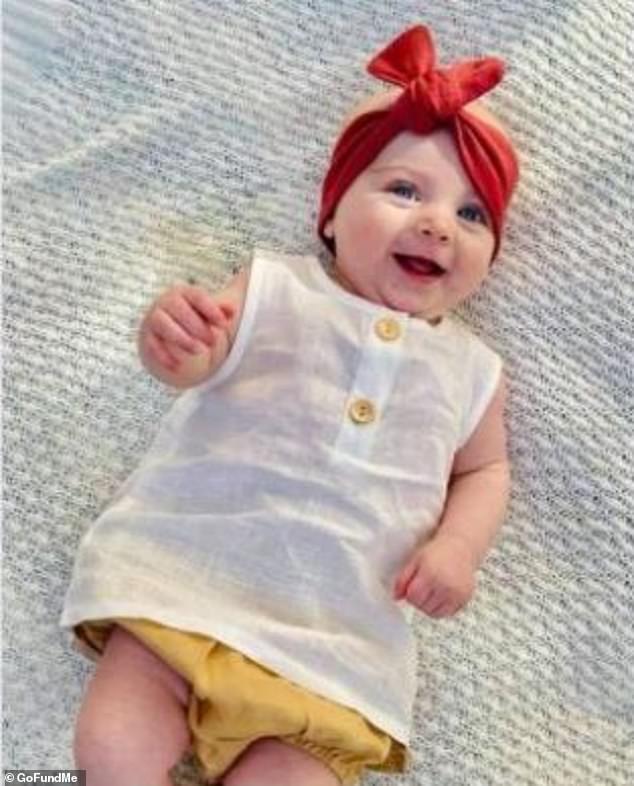 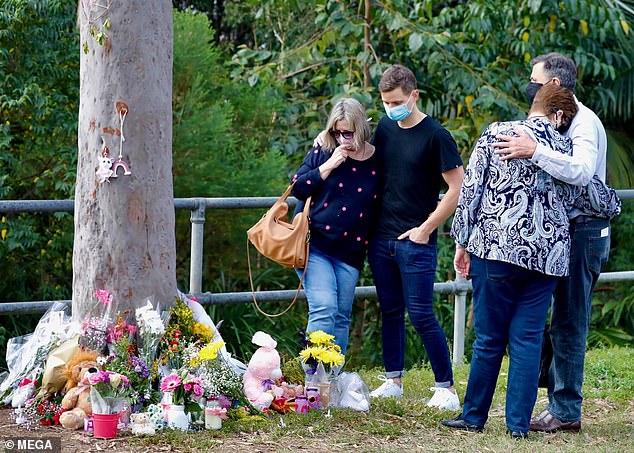 Family and friends laid flowers and gathered in Glindemann Park at Holland Park West in Brisbane, comforting each other as they remembered baby Mia, who died after a freak magpie swooping incident there on Sunday

Their actions come despite public statements by Brisbane’s Lord Mayor that the magpie believed to be responsible – which had previously attacked many locals and left some bleeding – had already been removed.

The memo detailed that a member of the public, living in a unit overlooking the park, called in to report she believed people were laying poisoned baits on the grass as a reprisal.

‘Caller has noticed some people throwing some food around on the grounds of the park,’ the memo reads.

‘Caller feels these people may be placing contaminated food for the magpies to possibly kill them. 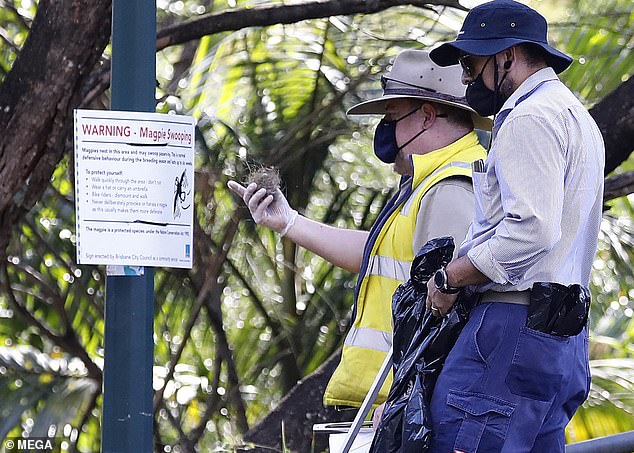 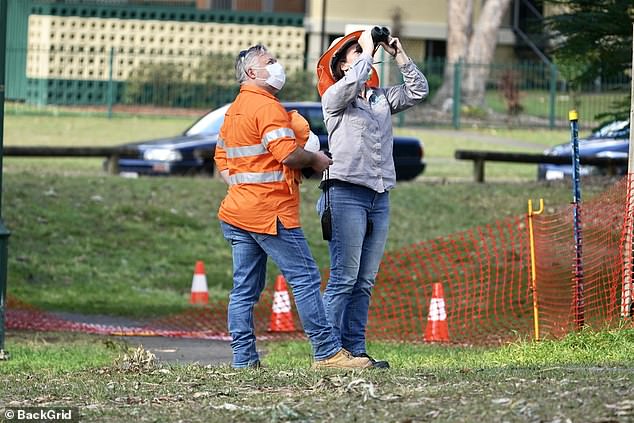 ‘A number of people walk their dogs in the park and this could possibly cause further incidents to others.’

The memo was noted as ‘urgent/emergency’ and had not been resolved internally.

Council investigators were spotted on the scene assessing the aggressive magpies’ nests on Wednesday.

One carried a plastic bag containing what could have been food laced with poison.

Questions remained about why Brisbane City Council had not sought to relocate the dangerous birds away from the 70,000 square metre park earlier despite receiving at least five complaints about them in July and August. 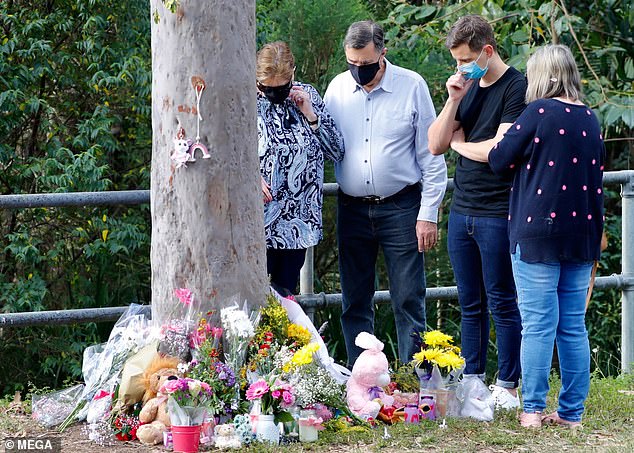 Bunches of flowers, soft toys, candles and crib hangings were laid on a eucalypt in the park as relatives gathered around to grieve baby Mia (pictured on Wednesday) 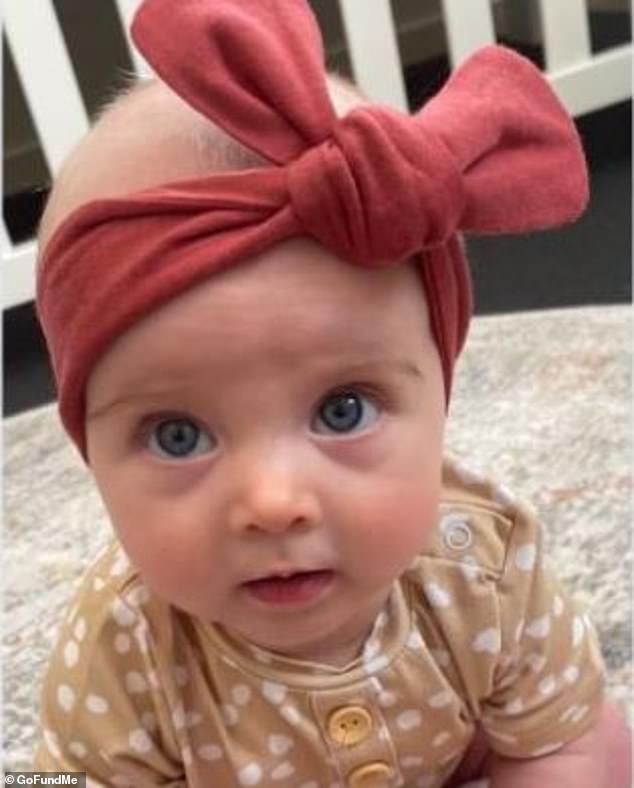 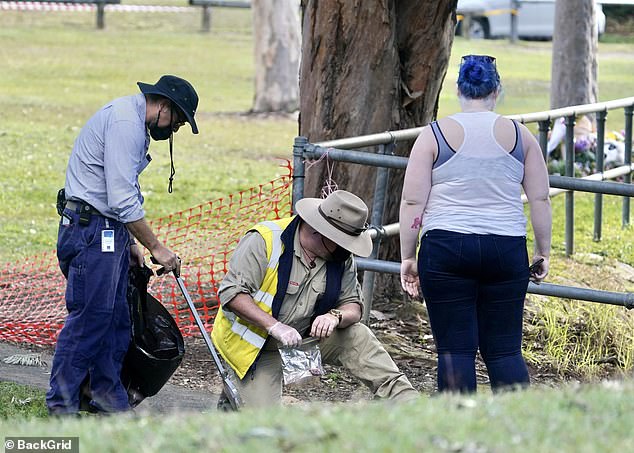 The tragic events brought back painful memories for a Queensland woman whose brother, Ivan Sthrowski-Wood, died at 12 years of age when he ran into an oncoming car while feeling a magpie in 2010.

‘I don’t think we’ll ever recover from burying a little one,’ Susie Sthrowski-Wood told the Courier Mail, admitting she cried when she heard of Mia’s death.

‘My heart goes out to them, I feel for the mother and father,’ Ms Sthrowski-Wood said.

Meanwhile Mia’s family and friends laid flowers and gathered in the park, comforting each other as they remembered baby Mia.

Bunches of flowers, soft toys, candles and crib hangings were laid on a eucalypt in the park as relatives gathered around to grieve.

Mia’s father, Jacob, described the agony of losing his only child in the freak accident to Daily Mail Australia.

‘Our whole world has been taken from us and the pain we are experiencing is unimaginable,’ he said.

‘We are so grateful for the most precious little gift we ever received.

‘Mia brought joy to everyone’s lives with her infectious smile, her pure innocence and her adorable laugh, she will be forever in all our hearts.’ 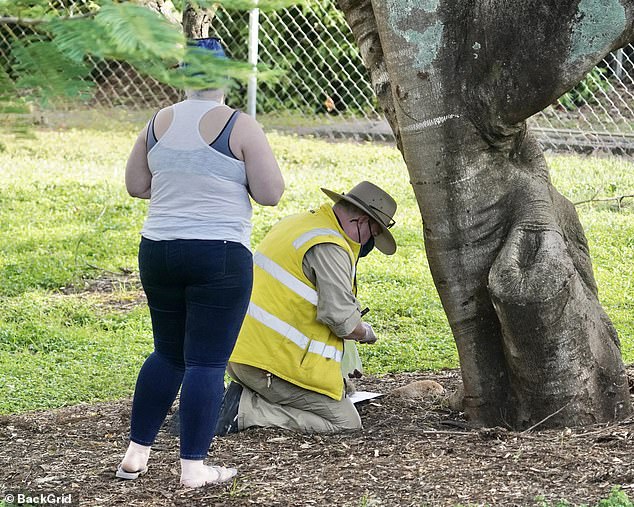 Council workers busy at work on Wednesday trying to reduce the threat of magpie attacks in the 70,000 square metres Glindemann Park, Holland Park West in Brisbane 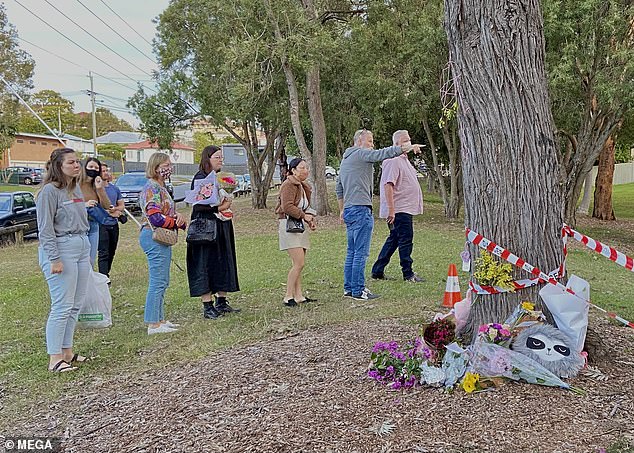 Jacob said Mia was the most precious gift that he and Simone ‘ever received’ and that her ‘adorable laugh’ and ‘infectious smile’ brought joy to everyone’s lives.

The doting father thanked family, friends and members of the public who have expressed their condolences, and reminded people to ‘love and embrace your loved ones’.

‘We live in such an incredible and thoughtful community,’ he said.

‘Your well wishes have touched our hearts and we appreciate all the support you have provided. We are sorry we cannot thank everyone individually but we are reading every loving message we receive.’

Brisbane Lord Mayor Adrian Schrinner said on Tuesday the magpie has been moved ‘a long way away’.

‘The bird has been moved well outside of the urban area and into a place where it can’t come back to Holland Park. That is an option we have available to us and one we use from time to time,’ he said. 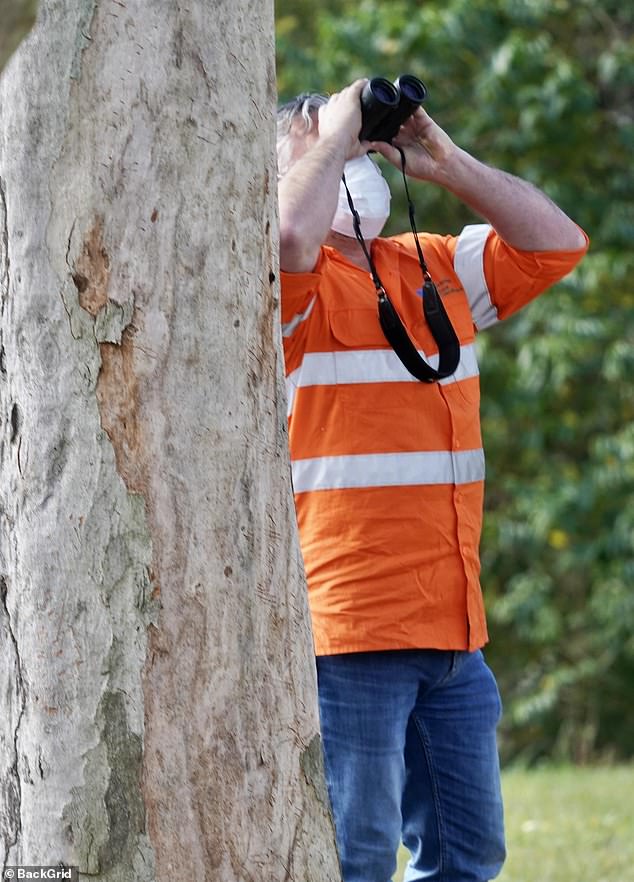 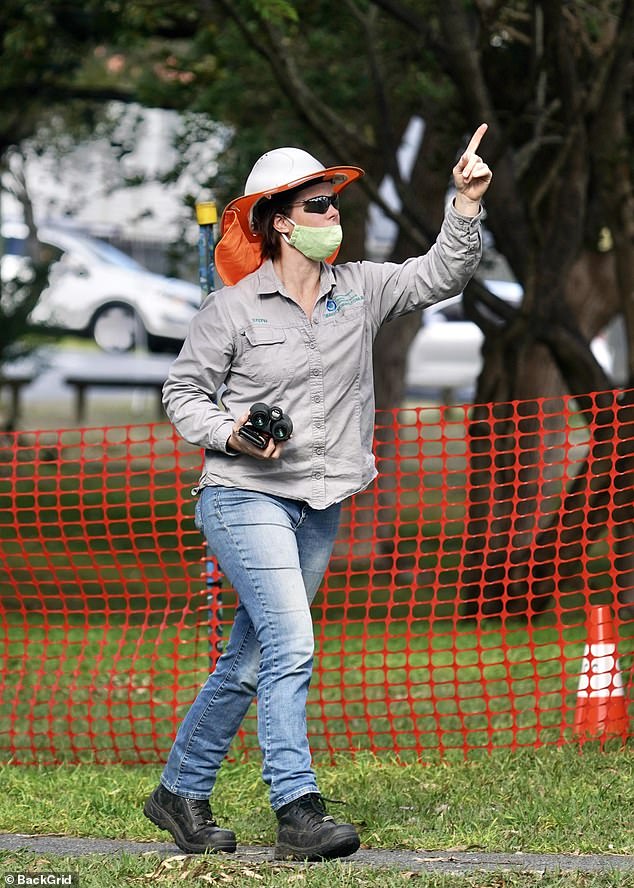 Magpies are a protected species in Australia and it is an offence to hurt or kill them.

If they are moved more than 50km away from their nest, they are unlikely to return.

Mr Schrinner said the council will look into ways to prevent the situation from happening again, despite a number of people complaining about the aggressive bird.

Earlier in the week a Queensland Ambulance Services spokesperson confirmed the mother had been ducking to avoid a magpie when she tripped over with the baby in her arms on Sunday.

Paramedics were called just after midday on Sunday.

Earlier it emerged a week before the tragedy a man sternly advised residents to avoid Glindemann Park after he was attacked multiple times, with others saying they too had been attacked and left bloodied by the wild bird. 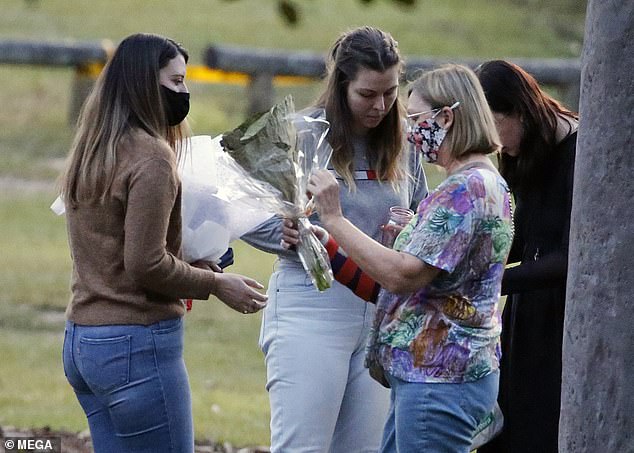 Pictured: Grieving loved ones are are seen with an arrangement of flowers at Glindemann Park

It was one of many stories shared online in the wake of the infant’s death, with dozens of locals coming forward to share stories of being chased by the territorial magpie.

‘It is magpie season again [and] there’s a particularly aggressive one who nests every year in the large gum tree at the end of Glindemann Park,’ a man wrote in a local Facebook group on July 31.

‘[I] suggest [using] an alternative route or if you have to [use it] keep an eye out, and don’t turn your back on him – just walk calmly through, waving your hands above your head if you have to.

Many locals said they had experienced similar run-ins with the feathered creature, which left some with bloody wounds. 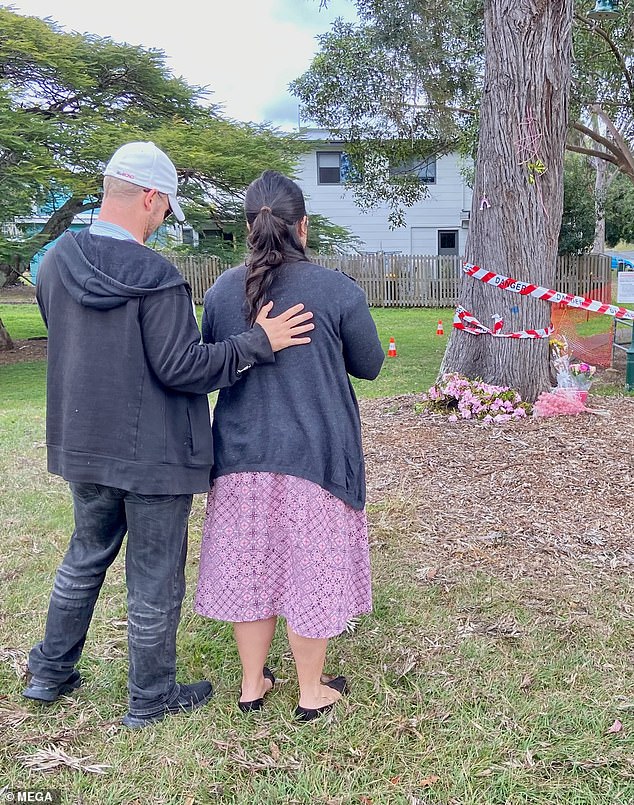 One mother said her children were attacked by the same bird, and were wounded on their cheeks, very close to their eyes, despite wearing helmets.

‘That one has nipped my left ear the past two years and drew blood, right where the earlobe joins my face,’ another woman said.

‘I’ve spoken to others who have also been nipped on their left ear by this same bird.’

‘He got me too. Luckily only got my sunnies,’ another replied.

One woman said the ‘very aggressive’ bird relentlessly swooped her as she walked 500 metres, while another said her father-in-law, who is on blood thinners, bled profusely after it cut his head.

Some claim they had previously reported it to the council, but no action was taken to relocate the animal until the little girl’s death.