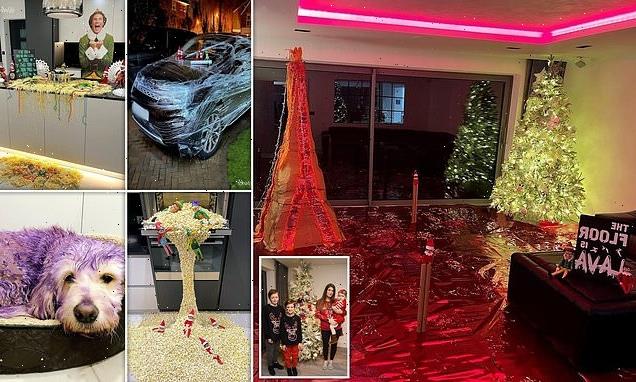 A bath full of popcorn, a car in cling film? Someone’s got an elfy sense of humour! How mother-of-three pranks her children every night in run-up to Christmas

Any parent will testify to just how busy the run-up to Christmas can be.

But for Claire Henderson, buying presents, festive food shopping and preparing for the big day are the least of her worries.

The mother-of-three comes up with a different elaborate prank every night throughout December to entertain her children. 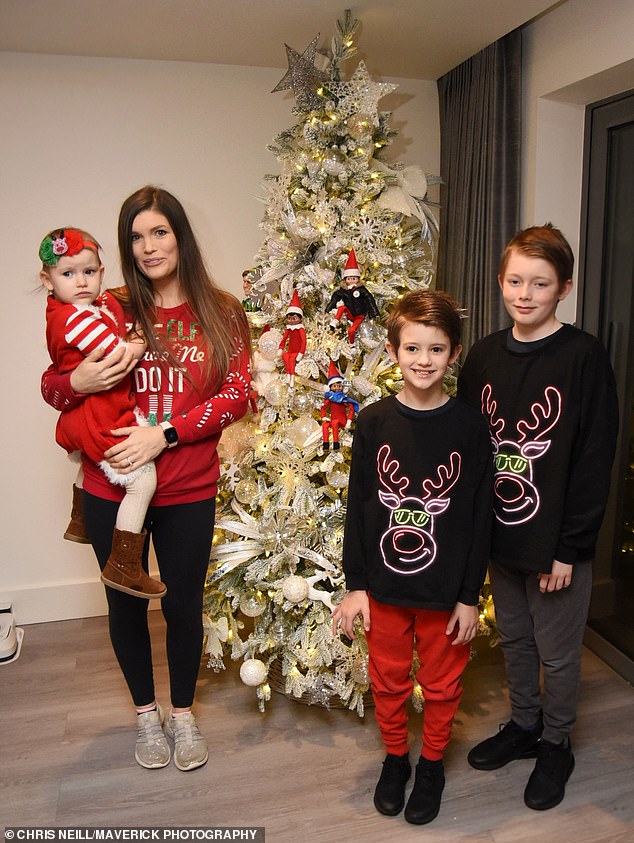 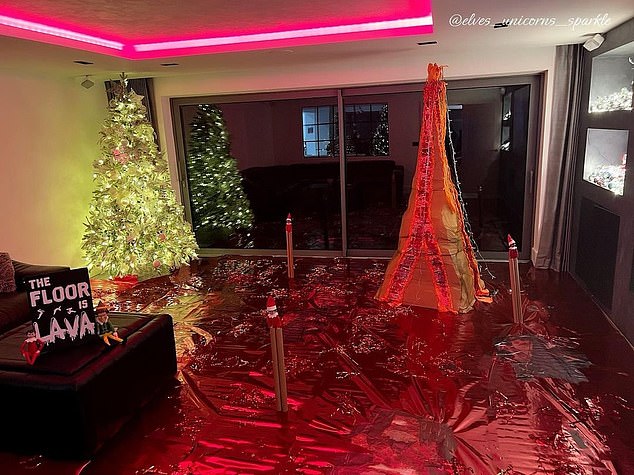 Hot spot: A volcano in the lounge with ‘lava’ on the floor made up using festive red-foil 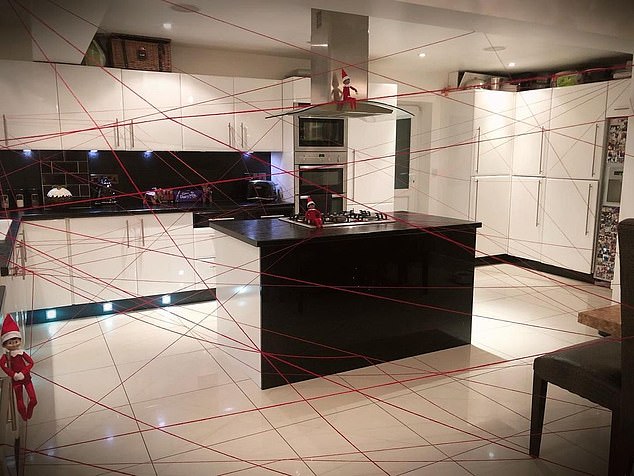 In another one of Miss Henderson’s pranks, the elves can be seen positioned around a kitchen blocked off by a maze of what appears to be red string

The routine is part of the tradition known as Elf On The Shelf.

It’s a game that originated in America in which parents play a prank overnight, leaving a doll elf in the vicinity of the trick so their children will think the toy carried out the mischievous act.

But Miss Henderson, in her thirties, has taken her pranks to the next level. 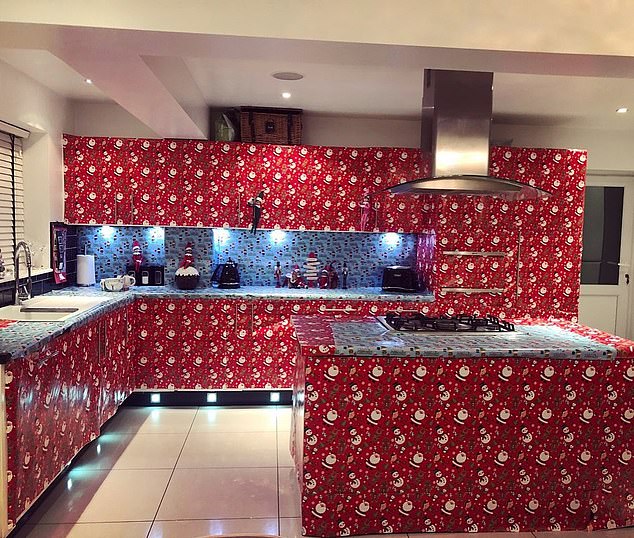 That’s a wrap! Christmas wrapping paper in the kitchen is another one of Miss Henderson’s elaborate hijinks 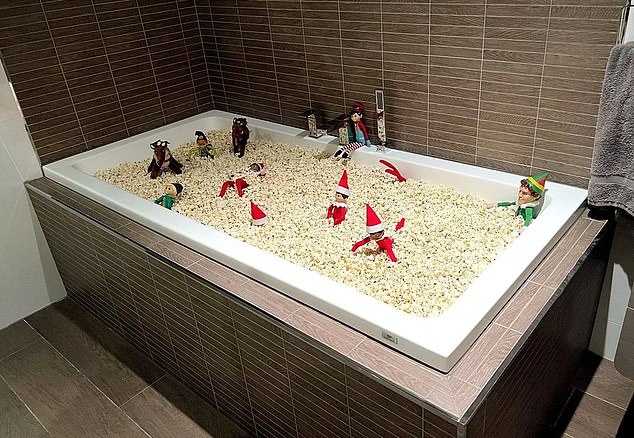 Grub in the tub: Elves playing in a bath full of popcorn following another one of Miss Henderson’s pranks

The administration worker who lives with her partner – the children’s father – in Worsley, Greater Manchester, has already wrapped the car in cling film, filled the bath with popcorn and turned the living room into an erupting volcano, complete with red-foil lava.

She has also built a giant gingerbread house complete with life-size figures, covered the kitchen in wrapping paper and cut up what appeared to be wads of £50 and £20 notes.

‘My friends say I’m insane, but I just love coming up with something bigger and better each year,’ she said yesterday – after dressing up the elves as characters from the Wizard of Oz and posing them following a yellow brick road across the front room. 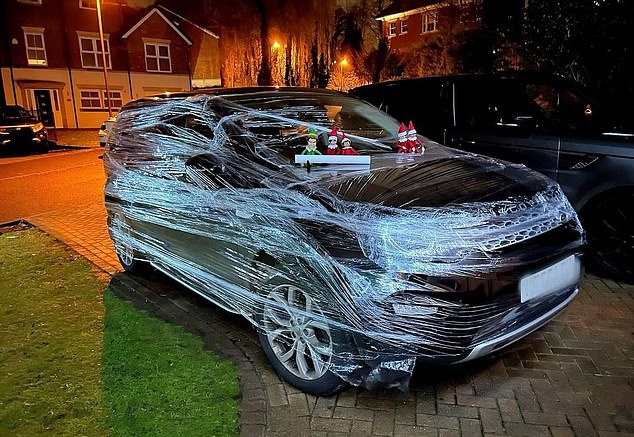 Plastic fantastic: The family car wrapped in cling film with a series of mischievous elves sat on it 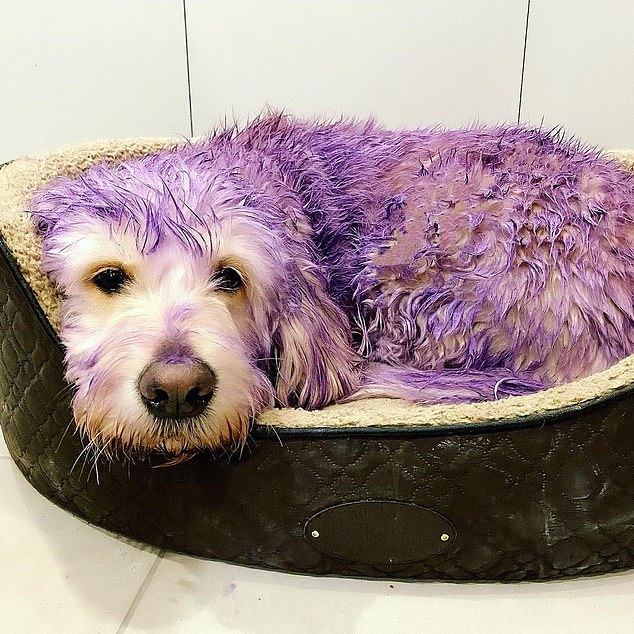 In another one of her festive pranks, Miss Henderson dyed the family dog 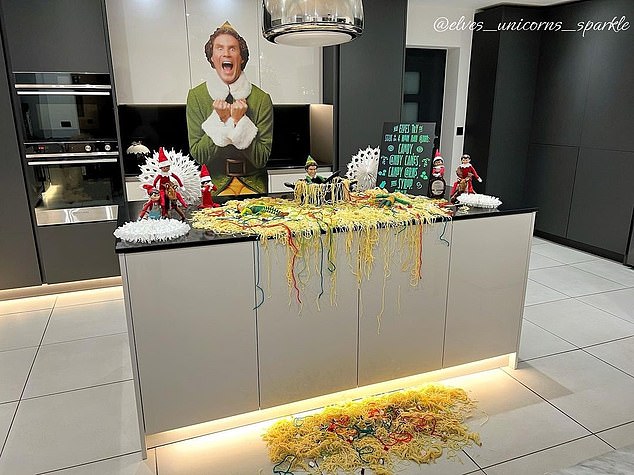 Miss Henderson set up a messy bowl of spaghetti in what looks like an ode to the Christmas movie Elf, where Will Ferrell’s beloved character Buddy can’t get enough of the pasta dish covered in sweets 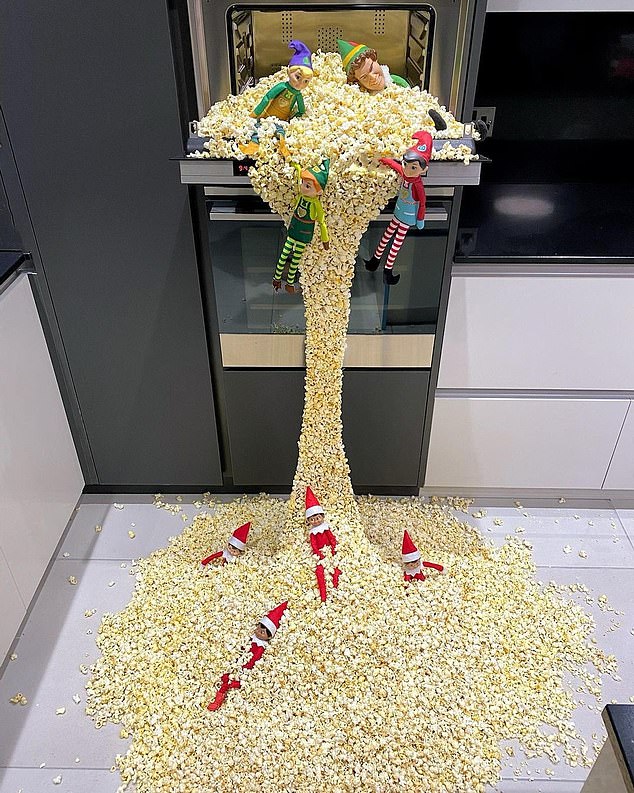 A waterfall of what appears to be popcorn to the floor, carrying elves with it, is one of Miss Henderson’s pranks

‘I love crafts, I’ve always made things, so each Christmas there have been more and more elves getting up to different kinds of mischief.’

Miss Henderson scouts the January sales for cut-price props that will inspire next year’s stunts and takes inspiration from films.

While oldest son Jaeden, 13, has of course long been wise to his mother’s night-time pranks, brother Harley, eight, still believes in the elves’ magic.

Meanwhile youngest child Remi, two, is just starting to discover them this Christmas.