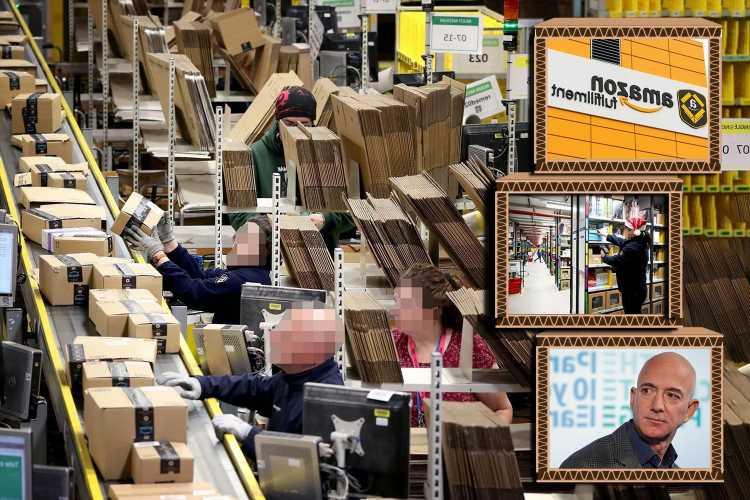 WITH Black Friday in six days and Christmas on the horizon, millions of us will be turning to Amazon to bag some bargains.

But while we are all grinning over the money and time we’ve saved shopping online, workers in the company’s warehouses will not be sharing in our delight. 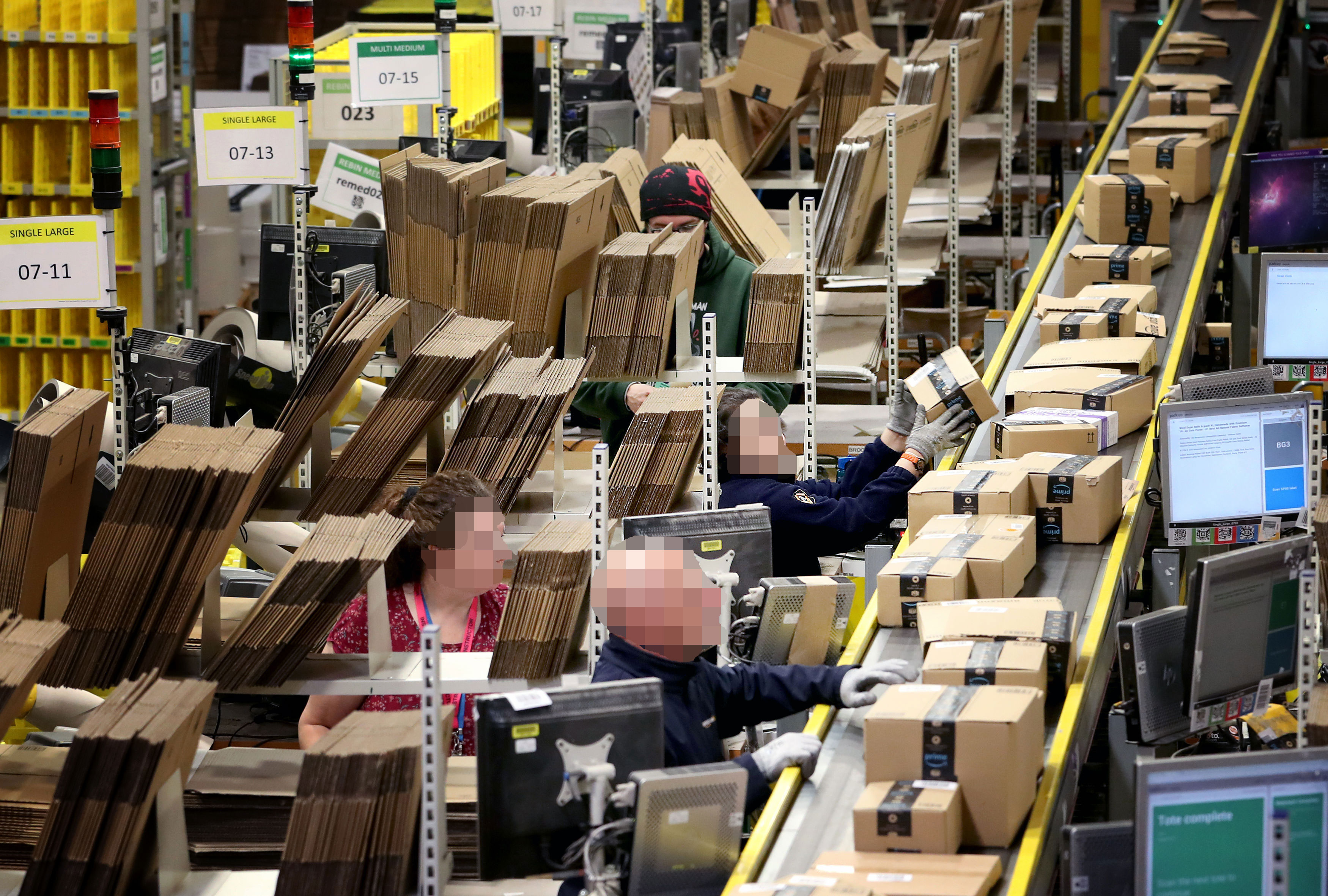 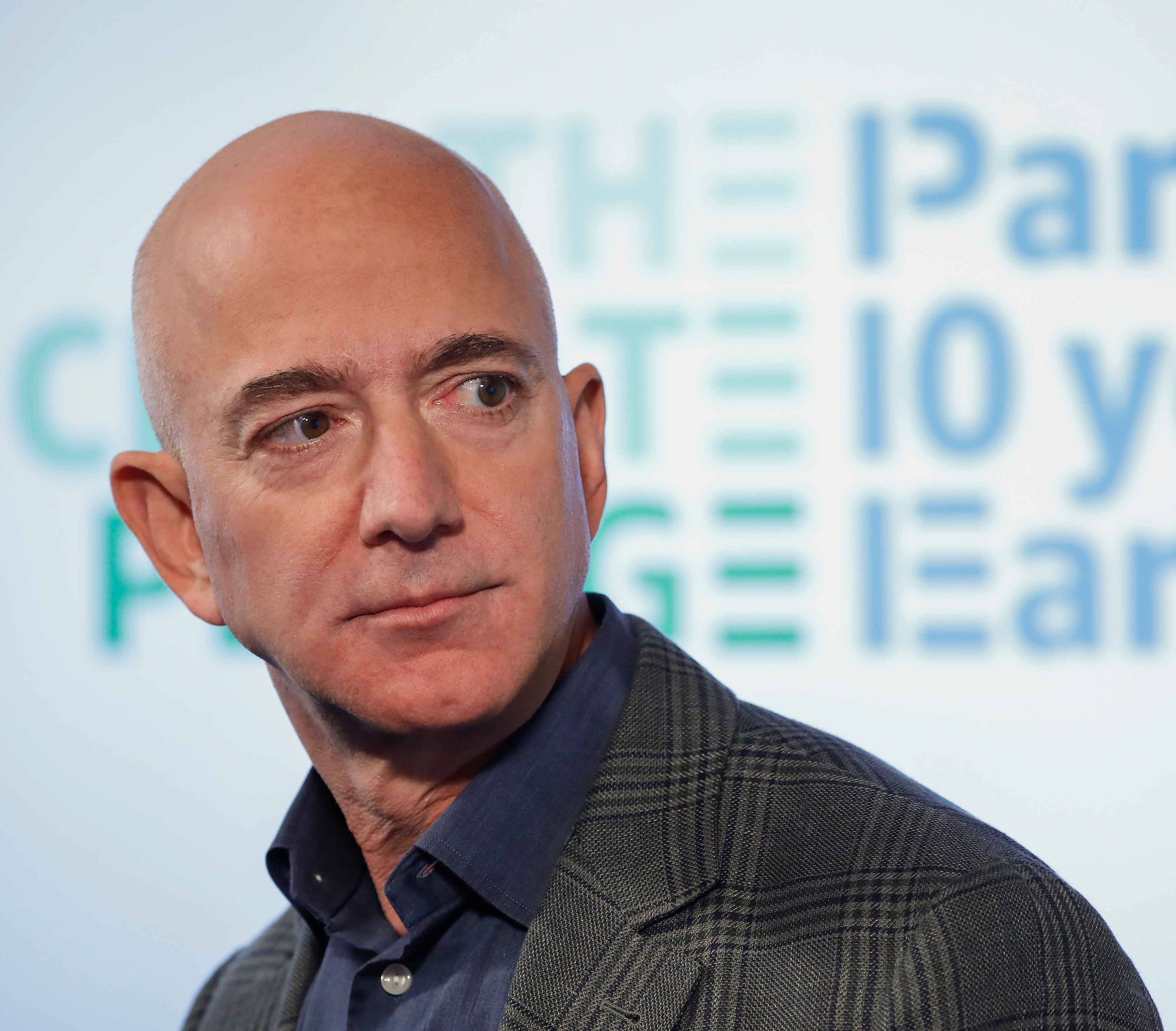 Today, one former Amazon employee tells of “slave-like” conditions, “mental targets” and “pressure not to take bathroom breaks” — all to ensure parcels arrive on time.

Olivia — not her real name — vows she will never order from the online retailer again after eight months of gruelling shifts earning £9.70 an hour as an order picker.

She worked in a 9ft-long workstation, which she referred to as “a cage”, and had a computer screen that showed how many items she had packed.

She claims the workers’ every move was watched by cameras — and “power-tripping” human monitors “loved” telling them off, especially if their performance ratings dropped.

Olivia, a Mancunian in her thirties, was tasked with finding, scanning and repacking items as quickly as she could. To hit her target, she needed to pack 360 items per hour — one every ten seconds.

During the early days of her exhausting 10½-hour shifts, she feared taking toilet breaks because she said it would impact on her score.

She lost 1½st during her time at the Amazon “fulfillment centre”, near Manchester Airport, and is adamant she will never work there again.

Olivia told The Sun: “It was one of the worst jobs I’ve had and I feel sorry for everyone who works there.

“It’s exhausting work. By the end of your shift, your feet are killing you and every part of your body is tired.

“Picking an item every ten seconds is just mental. You can’t physically do that for more than ten hours.

“They expect you to be like a robot, constantly keeping up your speed without stopping or needing bathroom breaks. It’s not realistic for a human.

“It’s really intense because there are cameras everywhere, too, and people constantly walking around monitoring your performance. It was so bad we used to joke with each other, ‘Ready to start your slave labour shift?’ and there was some truth to it.”

Amazon is expected to make record sales during the next few weeks and top up its owner Jeff Bezos’s already colossal fortune — estimated at nearly £150billion by Forbes ­magazine.

Last year, Brits splashed out £2million a minute at the peak of the Black Friday spending and had blown around £2billion over the weekend. This year, many will again turn to Amazon to help with Christmas ­shopping too, as polls show 86 per cent of us already use the online giant.

Despite the ease of using the site, Olivia urges shoppers to think about the company’s staff and the “brutal working conditions” they allegedly face.

She said: “It was absolutely vile and disgusting how they treated people.

“It’s like they think you’re a child and treat you as if you are stupid.

“I will never ever order from ­Amazon again.”

Olivia claims to have witnessed multiple outbursts from staff during her time in the warehouse and says she was once given a warning for being one minute late returning from her 30-minute lunch break. She explained that it was because the canteen was a 15-minute round trip from her workstation, but she received no sympathy.

She said: “If you wanted to sit down, you often had to go to a break room further away. By the time you got there, you only just had time to quickly shovel food down and go again. I got a ­warning because I had to walk to the far ­canteen and went to the toilet on the way back.

“When I first started at Amazon, I used to wait until my break to go to the bathroom because I didn’t feel I could go without being told off.

“In my opinion, it was clear they didn’t like you going to the toilet ­during your shift.

“They didn’t ever say you couldn’t go, but would tell you off if your ­performance dropped.

“They would ask you why the ­number of items you picked was lower, and one of my friends claimed the bosses threatened not to renew his ­contract if he didn’t speed up.”

It was absolutely vile and disgusting how they treated people. It’s like they think you’re a child and treat you as if you are stupid.

Olivia also said that performance indicators, which track how many parcels they packed in a shift, caused “anxiety” and “unneeded stress”. She said: “Even if you didn’t go to the bathroom, it was really hard to keep up with targets. They expected you to work as efficiently as a robot.

“In reality, you can’t keep working at the same pace all week because you’re shattered, especially after ­several days of work.

“They loved telling you off for ­anything and some of the managers were definitely power-tripping.”

During the first two months of the job, Olivia’s knees began to swell due to her standing all day. Her doctor advised the only way to reduce it was to rest, which she says was “impossible” to do while working at Amazon.

In a separate incident, Olivia claimed the team’s first-aiders were ­clueless about what to do after a product leaked over her arm.

She said: “It must have happened when I picked up one of the items, because later my skin started to burn and became very irritated.

“The first-aider wouldn’t stand any closer than two metres from my ­outstretched arm because of Covid and didn’t know what to do.

“In the end, I went to the ­bathroom to wash my arm and later someone came looking for me as I was ­missing from my station for ten ­minutes. It was unbelievable.”

‘Asleep on their feet’

Olivia claims she was not the only employee to have had such a negative experience while working in the Amazon warehouse. She is urging the public to reconsider ordering from the retailer and would discourage ­others from signing up to work there this festive season, too. And she is not the only ex-employee to make such claims. When journalist Alan Selby went undercover at Amazon’s Tilbury warehouse in Essex for a 2017 ­investigation, he says he found staff “asleep on their feet” due to the tiring shifts and a series of other problems.

Alan, a keen marathon runner, feared he “might keel over” during the shift because he was pushing himself so hard to meet his targets, walking ten miles most days.

The Sun put Olivia’s claims to Amazon, which said its targets are regularly evaluated and based on “attainable employee ­history”.

In a statement, the company said: “Performance is only measured when an employee is at their station and logged in to do their job. If an associate logs out, the performance management tool is paused. Meaning, if an associate needs to leave a station to wash their hands or use the ­restroom, to name just a few, they can do so once they are logged out without impacting their performance.

“Performance metrics are regularly evaluated and built on benchmarks based on actual attainable employee performance history.

“In addition to offering excellent pay and benefits, we ensure that safety is a priority, that everyone is supported, treated with dignity and respect, gets regular breaks, and works at a comfortable pace.” 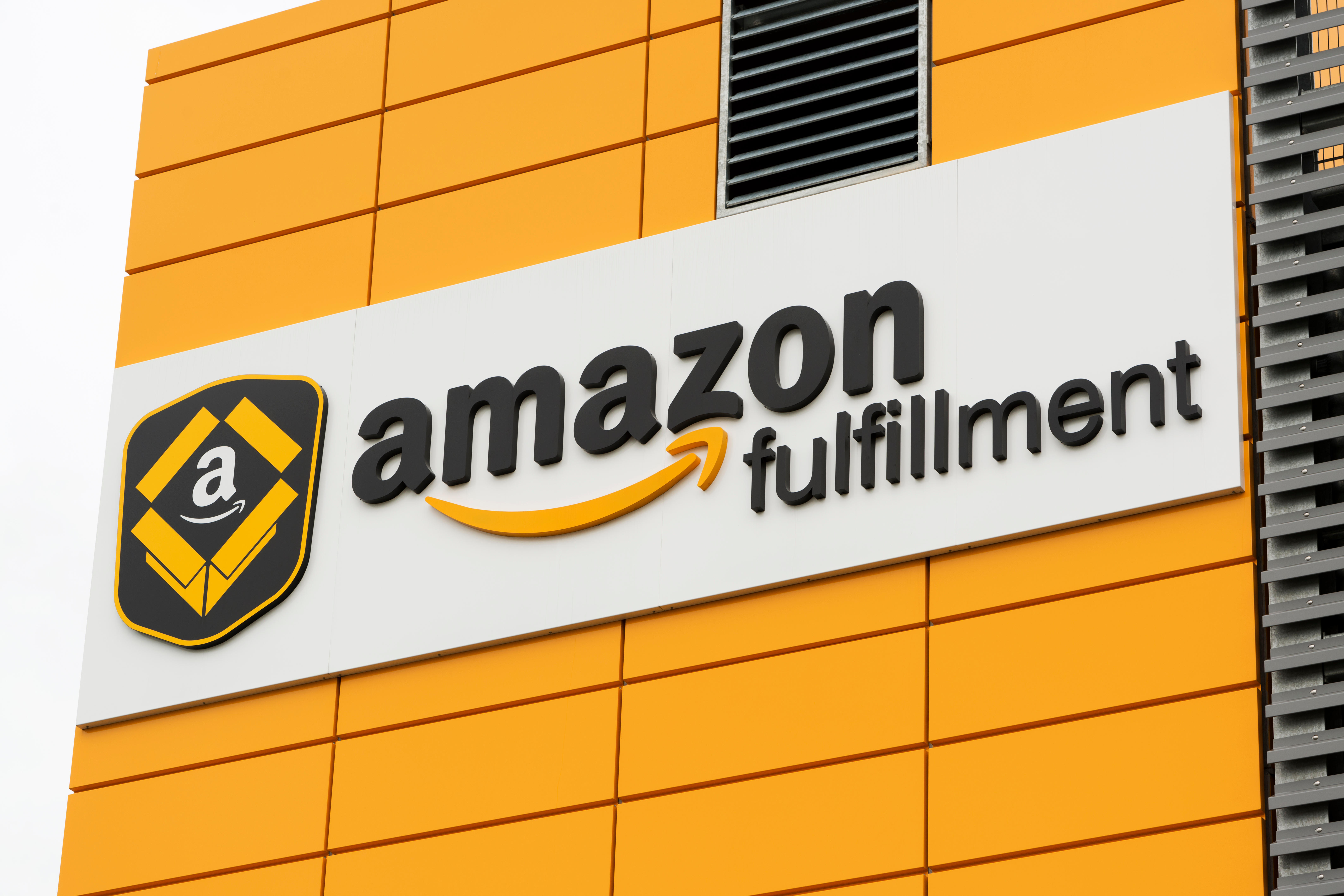 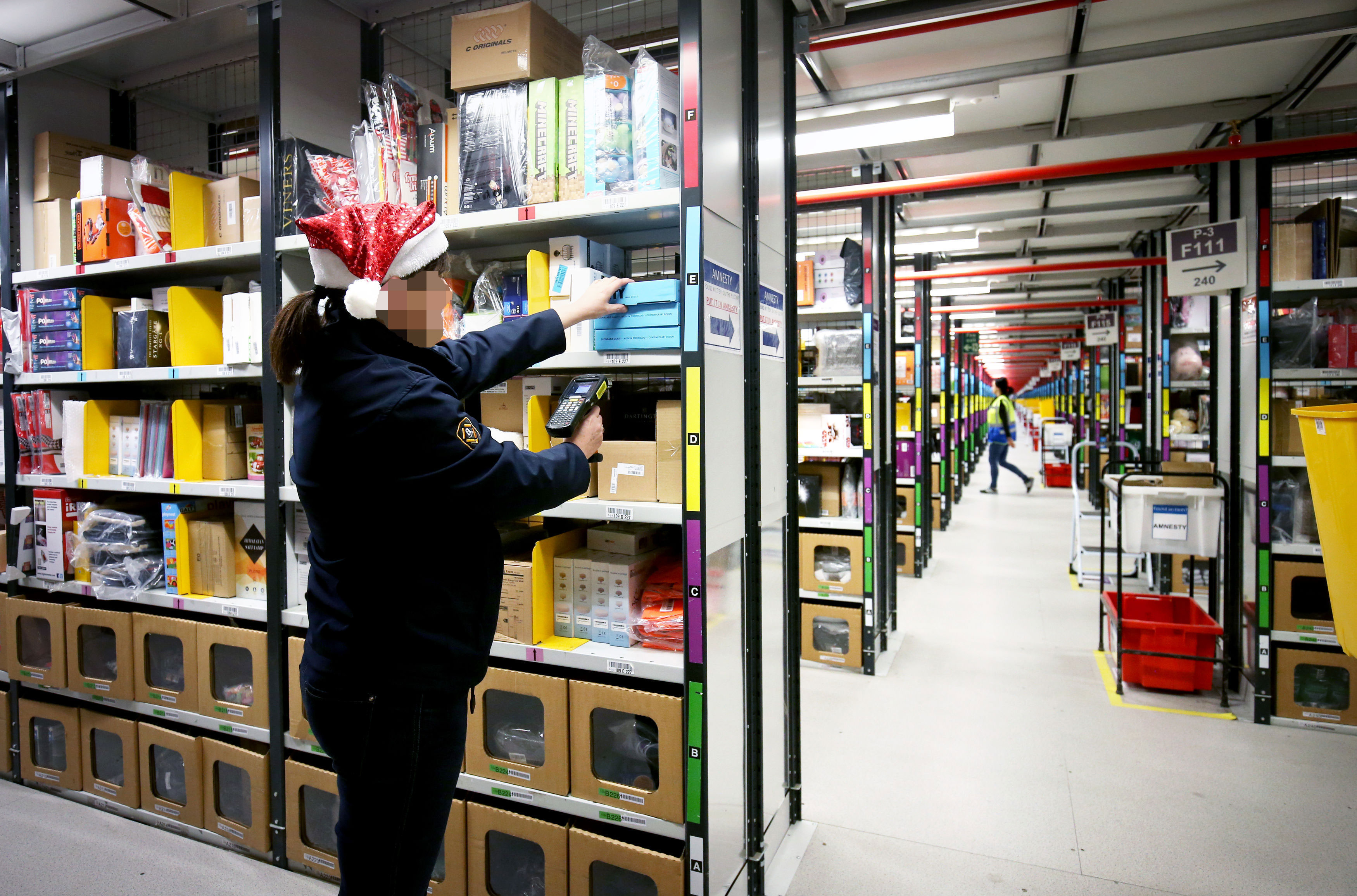 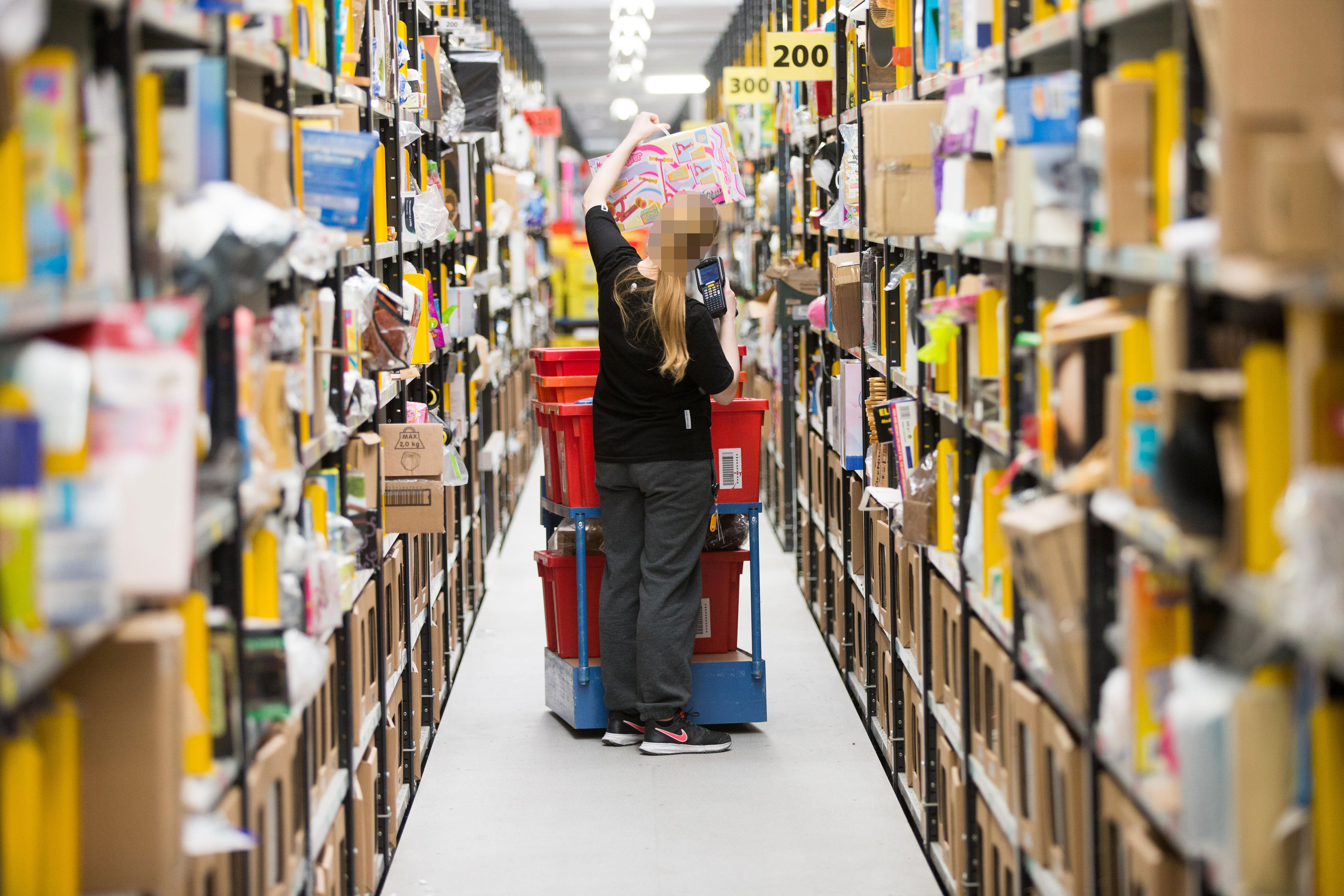