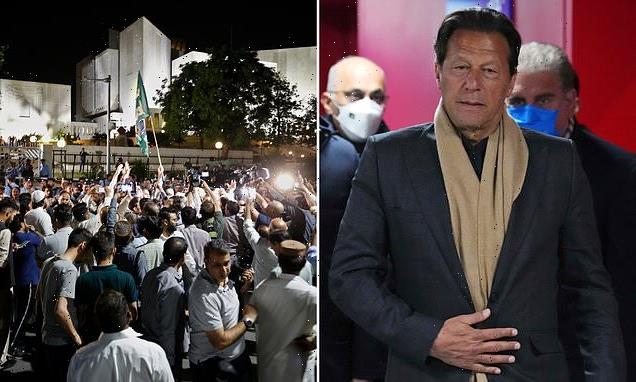 Imran Khan OUT as Pakistani PM after losing late-night no-confidence vote from MPs: Political crisis drags country to the brink of chaos

Fears Pakistan could slip into crisis emerged today as Imran Khan was removed from office after Pakistani MPs ruled they had lost confidence in their former leader.

Mr Khan, 69, and his allies had dramatically attempted a last-gasp bid to prevent the motion last week by dissolving parliament and demanding a snap election.

But in a ruling on Thursday, Pakistan’s Supreme Court declared the move to block the no-confidence vote both unconstitutional and illegal.

Pakistan’s parliament met on Saturday to proceed with the vote following a 13-hour impasse in which Khan’s Tehreek-e-Insa party used filibustering in an attempt to slow the process.

Several of Khan’s closest allies and a key coalition party deserted him as opposition parties swooped in and agreed to oust the embattled leader.

His removal from office continues Pakistan’s ugly record with Prime Ministers, with not a single leader completing their full five-year tenure since 1947.

The head of one of the country’s largest parties, the Pakistani Muslim League, will now take over as prime minister.

The star cricketer-turned-politician had said he will refused to acknowledge an opposition government if removed from office.

And in recent weeks he shared theories that an American-led conspiracy was behind his fall from grace. He has so far shown no evidence of such claims – which Washington has denied.

Anticipating his loss today, Khan called on his supporters to stage huge rallies nationwide on Sunday.

‘You have to come out to protect your own future’, the under pressure former Prime Minister said.

‘It is you who have to protect your democracy, your sovereignty and your independence.,. This is your duty,’ he said. ‘I will not accept an imposed government.’

Khan’s options are limited and should he see a big turnout in his support, he may try to keep the momentum of street protests as a way to pressure Parliament to hold early elections.

The cricketer-turned-PM, 69, lost his majority in parliament last week as his opponents built their support, and he was facing the prospect of being ousted by the opposition on Sunday.

But the deputy speaker of parliament, a member of Khan’s party, blocked the motion that the Prime Minister had widely been expected to lose, ruling it was part of a US conspiracy designed to depose him. Washington has strongly denied any involvement.

The move had thrown the nuclear-armed nation, which the military has ruled for almost half its history, into a full-blown constitutional crisis, with opposition leader Shehbaz Sharif calling the blocking of the vote ‘nothing short of high treason’.

The nation is stunned,’ Dawn newspaper said in an editorial on Thursday.

‘Even as political pundits and the media confidently predicted Mr Imran Khan’s defeat in the vote of no-confidence, he seemed unperturbed.

‘No one could have guessed that his last ploy would involve having the democratic order burnt down.’ 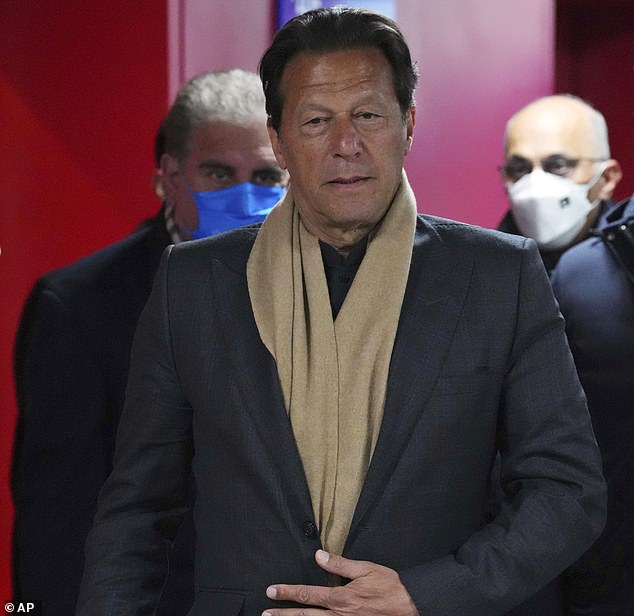 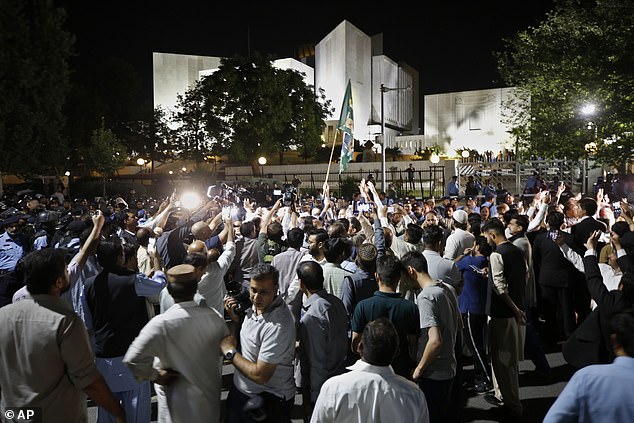 Mr Khan, 69, and his allies had attempted to block the motion last week by dissolving parliament and demanding a snap election. Pictured: Khan’s supporters in Islamabad on Thursday 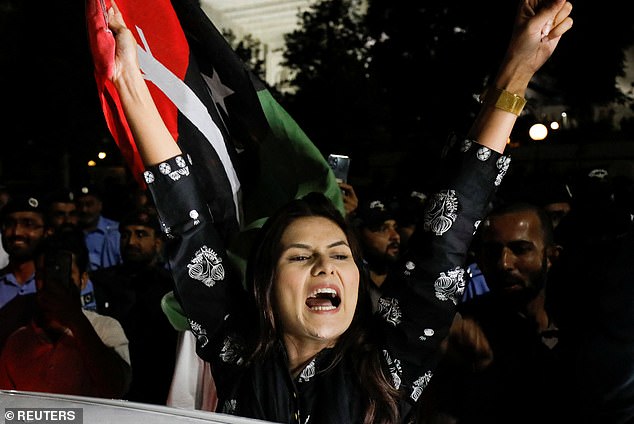 The largely ceremonial head of state, President Arif Alvi, said on Twitter earlier this morning that Khan would stay on as prime minister in a caretaker role.

Khan wants a general election within 90 days, though the country’s electoral commission has already ruled out his possibility.

The Prime Minister says he did not act unconstitutionally, calling the move to oust him a plot orchestrated by the United States – a claim Washington denies.

Khan insists he has evidence – which he has declined to disclose publicly – of US involvement in the no-confidence motion, although local media have reported it was merely a letter from Pakistan’s ambassador following a briefing with a senior US official.

Political analysts say the military regarded Khan’s conservative, nationalist agenda favourably when he won election in 2018 but later cooled towards him over various wrangles. 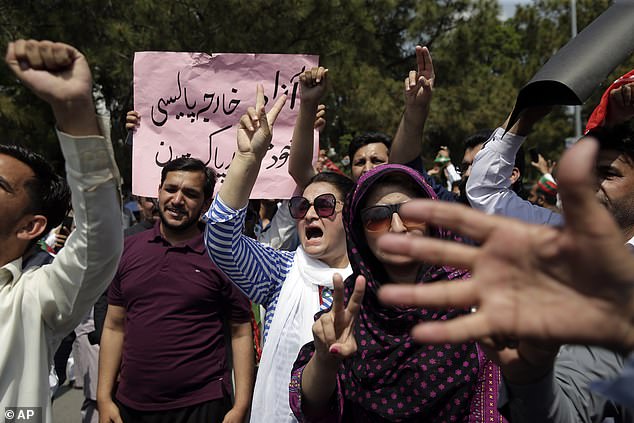 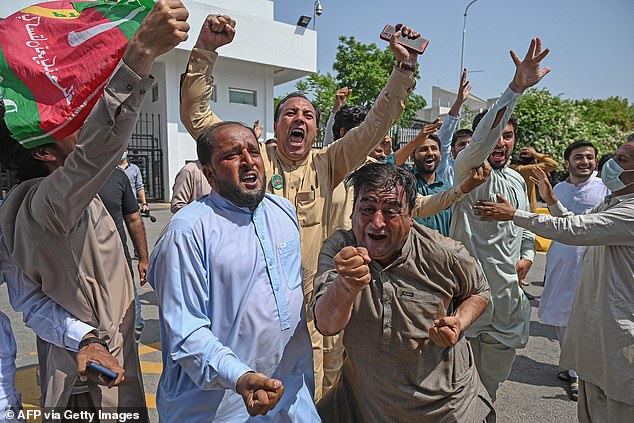 Khan foiled an attempt to boot him from office by getting the president to dissolve the national assembly, calling for fresh elections to be held within months (supporters of Khan pictured)

The military denies involvement in civilian politics but the generals are unlikely to stand by if they thought political chaos was damaging the country or if their core interests were threatened.

He was elected as a new, third force in Pakistan’s politics, on promises to end corruption and revitalise the economy.

However four years later many feel he has failed to deliver, with rising costs of living a common complaint made against him.

Speaking to the nation in the wake of the dissolution of parliament, Khan said: ‘I have written to the President to dissolve the assemblies.

‘There should be elections in a democratic way. I call upon the people to Pakistan to prepare for elections.’

‘I congratulate every Pakistani on the speaker’s decision. The no-confidence motion was a foreign conspiracy against us.

‘The nation should decide who should govern them. Not the corrupt people who conspire with foreign powers. Prepare for elections. You will decide.’ 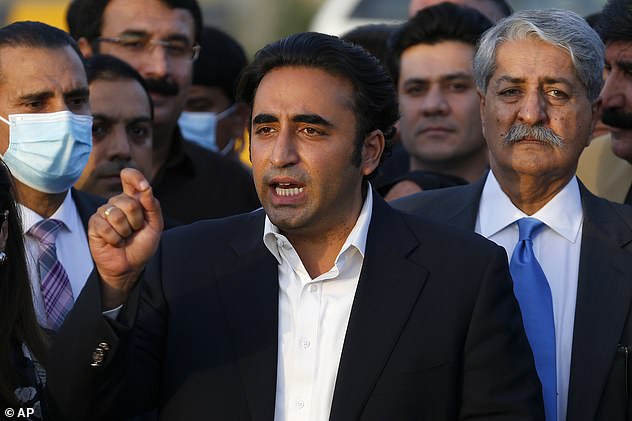 Bilawal Bhutto Zardari (pictured), head of the Pakistan People’s Party in the National Assembly, called the decision to not allow a vote on the no-confidence motion unconstitutional

The military has remained quiet over the latest crisis although army chief Gen. Qamar Javed Bajwa told a security summit in Islamabad over the weekend that Pakistan wants good relations with China, a major investor, and also with the United States, the country’s largest export market.

Bilawal Bhutto Zardari, chairman of Pakistan People’s Party (PPP), accused the government of violating the constitution by not allowing voting on the motion.

He said that the united Opposition will stage a dharna – a way of showing disagreement by refusing to leave a place – in the National Assembly.

He said: ‘Our lawyers are on their way to Supreme Court.

‘We call on all institutions to protect, uphold, defend & implement the constitution of Pakistan.’ 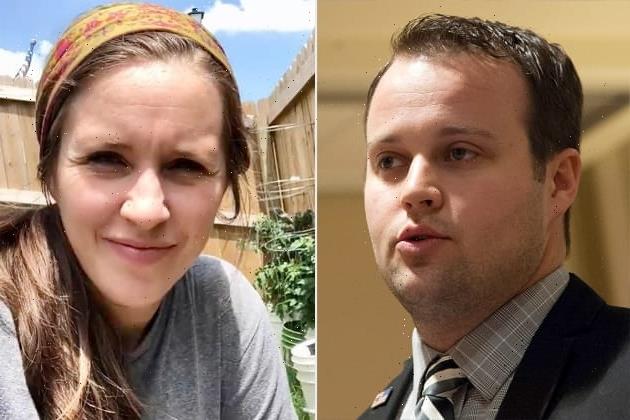