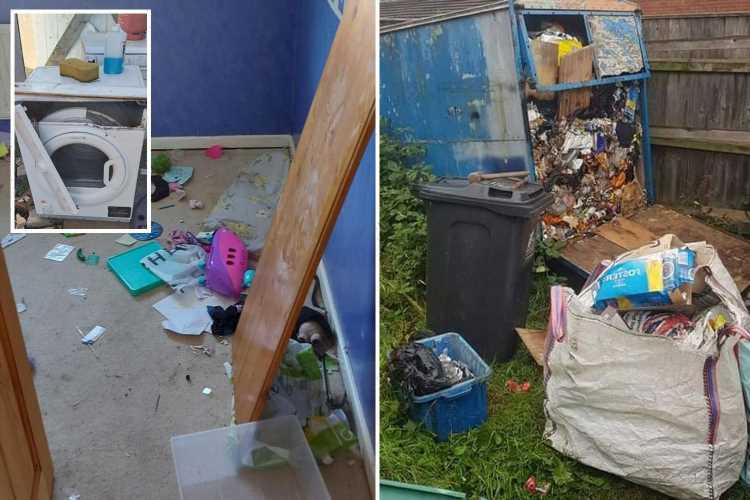 A LANDLORD has been left with a £15,000 bill after he claimed nightmare tenants completely trashed his property.

The house in Immingham, near Grimsby, Lincs, was left with broken doors, furniture that had been burnt or sold illegally and a trailer was filled with rubbish, including dirty nappies.

Outside, the property had become infested with rats.

The landlord, who wanted to remain anonymous, rented out the home in April last year and said he had been through hell dealing with the tenants and had to fork out legal costs to get them evicted.

The tenants, who were in rent arrears, were given six months' notice to leave in September 2020 but the Covid-19 pandemic delayed the eviction.

They then failed to turn up for a court appearance in August when summoned.

The tenants eventually left sometime around the August Bank Holiday weekend but didn’t handover the keys.

The eviction was finally completed last week, leaving the landlord to sort out the mess.

He told the Grimsby Telegraph: "Most of the kitchen doors are missing, the integrated appliances don't seem to work anymore. The back door handle is missing, there isn't even a lock in it now.

"The toilet is leaking, and instead of telling me, the tenant placed bathroom towels around it which has made things a lot worse because the laminate flooring is completely destroyed. There's nothing in the property which hasn't been untouched.

"The property was fully furnished when I rented it out to the tenant and now there's hardly anything left inside.”

Outside was also left in a state with a trailer the landlord kept in the back garden filled with dirty nappies, waste food, empty beer cans and discarded toys.

Neighbours have complained about there being a rat problem.

He said the property had been left in an “absolutely disgusting” state.

The landlord added he felt let down by the legal process which he said sided more with the tenants than the landlord.

He said the whole experience had been emotional and stressful and a complete “nightmare,” adding he was now going to have to pay for the damages.

Having “gone through hell” the landlord now said he was left weighing up his options whether or not to rent out the property or sell it.