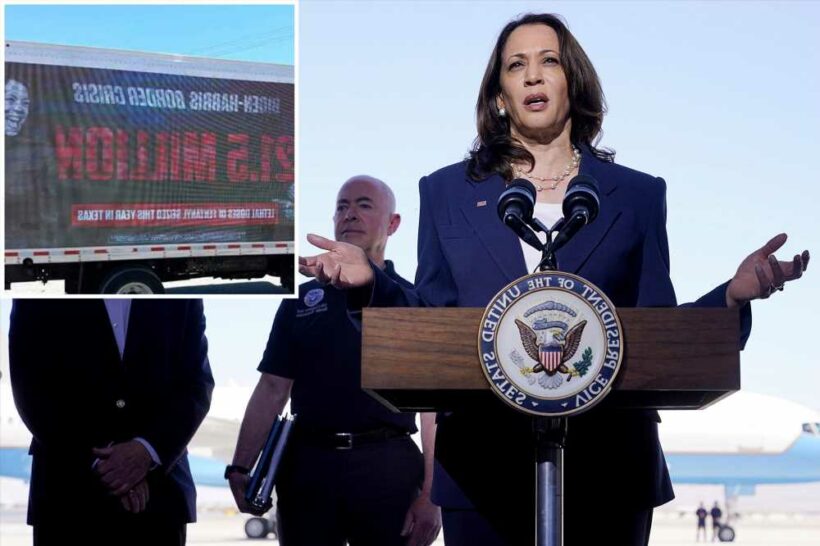 Kamala Harris doesn’t actually visit border, says nothing of substance, leaves — it was all theater

Vice President Harris finally took a trip to the US border — and Republican critics followed her every step of the way.

Harris, in El Paso, Texas, on Friday, was met with a mobile billboard purchased by the Republican National Committee calling out what they said were her and President Biden’s failures to deal with the border crisis.

The ads were in both Spanish and English.

“Biden Harris Border Crisis. 21 Year High Border Encounter,” reads one billboard. Others touted statistics like the 21.5 million doses of the deadly narcotic fentanyl that have been seized in the Lone Star State. Another notes a 3,166% increase of sex offender busts.

“After more than 90 days of lying to the American people and fueling the crisis at the border, Kamala’s layover in El Paso is too little, too late.”

Harris previously took heat for skipping out on a border visit for more than 90 days, even as the flood of migrants coming through Mexico to the US has increased.

While on the ground in El Paso, Harris met with migrant children and border officials. She previously spent time in Guatemala and Mexico to address what she said were the “root causes” of the migration.

During one audience in Guatemala earlier this month, Harris bluntly told the assembled crowd not to come to the US — earning scorn from left wing allies back home.