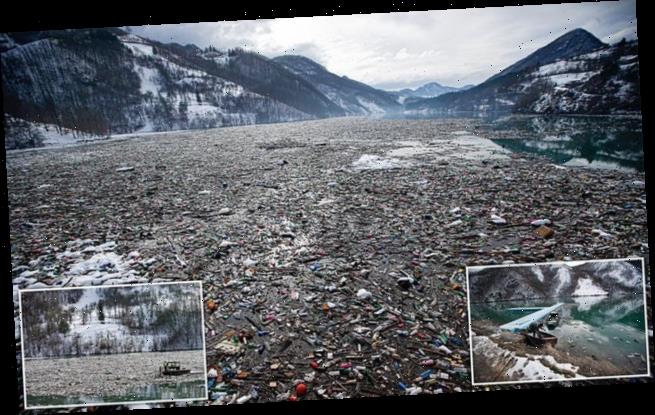 The tide of filth: Islands of waste float along rivers, plastic bags hang from trees and a thick layer of junk covers Serbian lake as the Balkans lose their battle with pollution

Cranes and building machinery were sent to a lake in Serbia last week to clear a thick layer of waste covering its surface.

Tons of floating waste have accumulated at the foot of the Lim River hydro-electric power plant on the Potpeć Reservoir in southwest Serbia following heavy rains earlier this year. The islands of rubbish are now threatening to clog the dam.

Serbia, like the other Balkan nations, is overwhelmed by communal waste after decades of neglect and lack of efficient waste-management policies.

In photographs taken last week, workers can be seen as they set landfills alight, plastic bags hang from trees, and islands of rubbish float in front of a backdrop of pristine snow-capped mountains.

The formation of waste, dubbed the ‘Potpeć accumulation’, amassed following heavy snow and rain in December and January. The swollen waterways swept over landfill sites, carrying the waste to the foot of the dam. 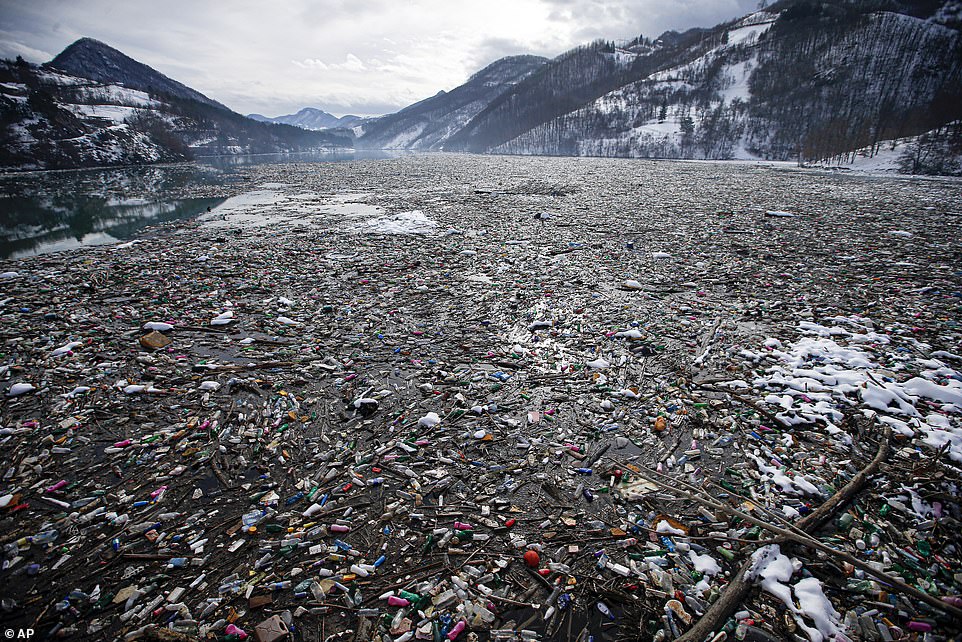 Plastic bottles and rubbish float in an island of rubbish, dubbed the Potpeć accumulation by officials, on Friday. Serbia and other Balkan nations are drowning in  communal waste after decades of inefficient waste-management and neglect 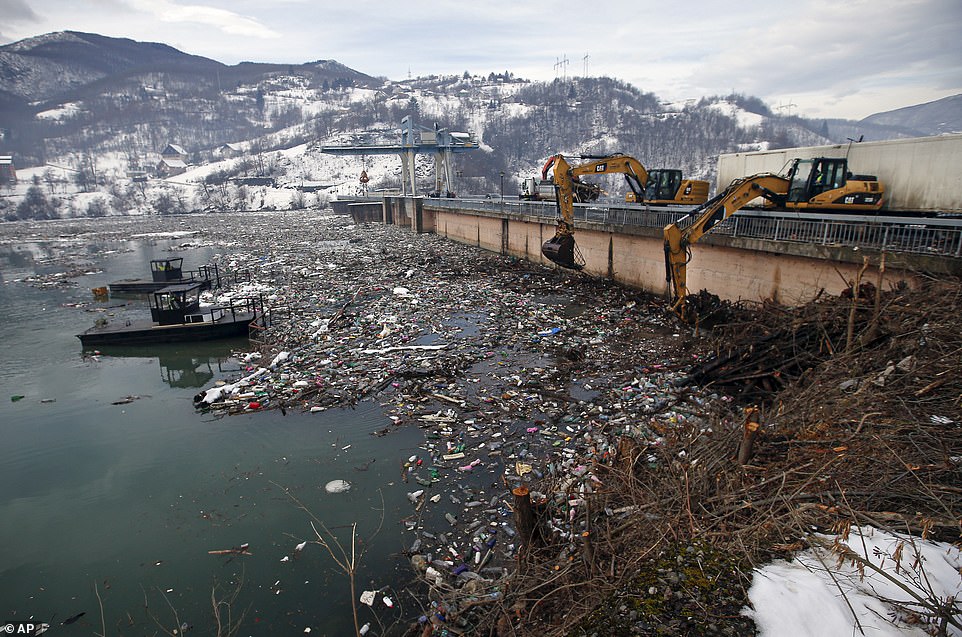 Huge cranes clear tons of garbage stuck at the foot of the Lim River hydro-electric power plant on the Potpeć Lake in southwest Serbia last week. The rubbish amassed after heavy rains swelled waterways and swept over landfill sites, dragging the waste with it 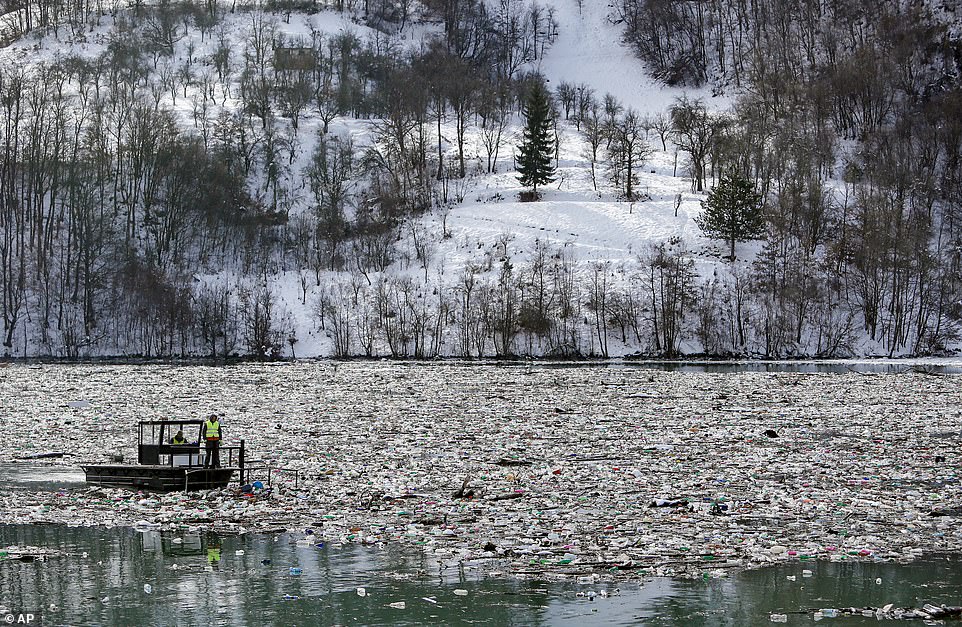 A boat pushes tons of garbage stuck at the foot of the hydro-electric power plant on the Potpeć lake in southwest Serbia. Heavy snow and rain in December and January caused waterways to swell and sweep over landfill sites. The waste was picked up and driven along the river to the foot of the Lim River hydro power dam 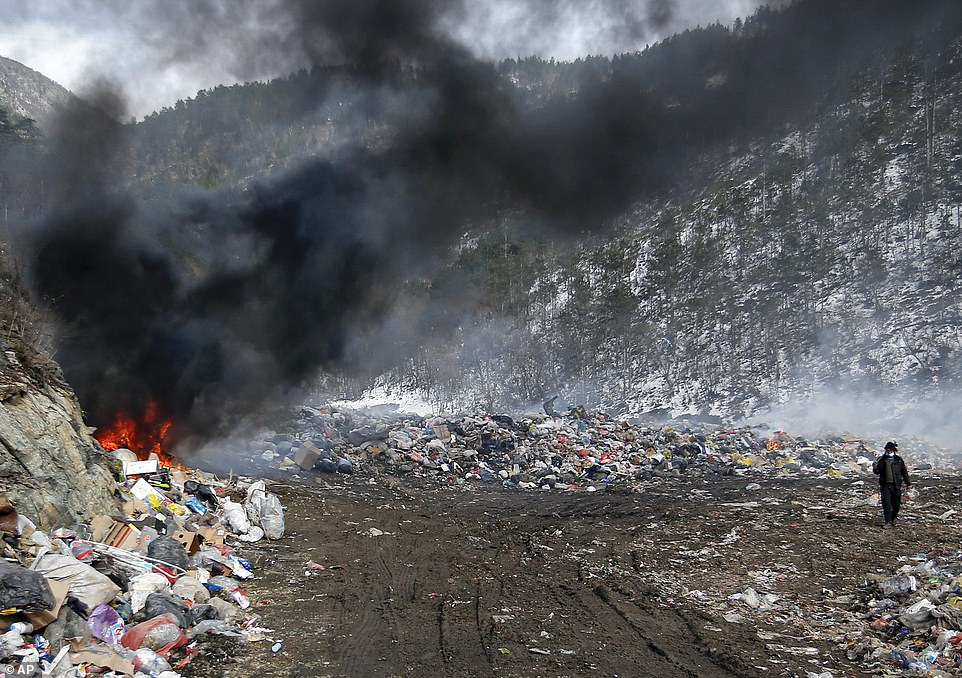 A rubbish collector walks among a landfill site near the Potpeć accumulation as ignited waste blows out a thick plume of smoke on Friday. The Potpeć accumulation is an island of tons of waste at the foot of the Lim River hydro-electric power plant, which formed after waste was swept along Serbia’s Lim River following heavy rains in December and January

The surface of the lake became covered in a thick layer of waste ranging from plastics to rusty metal scraps, tree trunks and even reportedly a coffin.

The garbage has been swept downstream by the Lim River, which feeds the Potpeć’s 150ft tall and 700ft long dam.

The Lim originates in neighboring Montenegro, passing through several municipalities and their waste sites in both Montenegro and Serbia.

‘Based on a recent study, we found out that in these towns, in the five municipalities in Montenegro and three in Serbia, about 45,000 tons of waste are collected (per year),’ said Predrag Saponjic, the Lim River hydropower plant system manager. 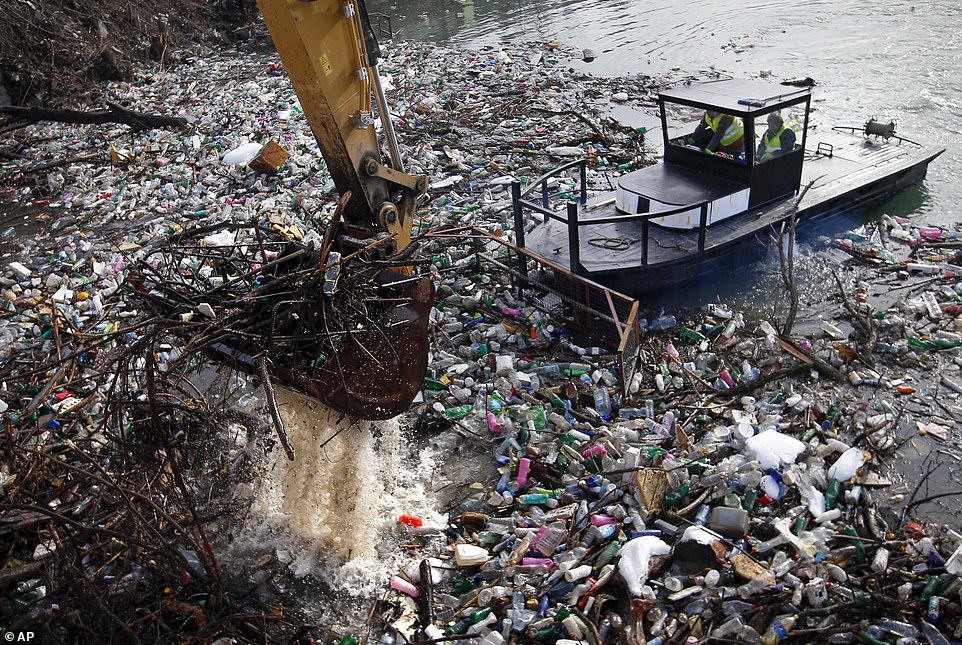 A boat directs rubbish stuck at the foot of the Lim River hydro power plant on Potpeć lake as a crane reaches into the water to collect bottles, rusty metal, and other waste. The thick layer of waste included tree trunks, and even a coffin, according to reports 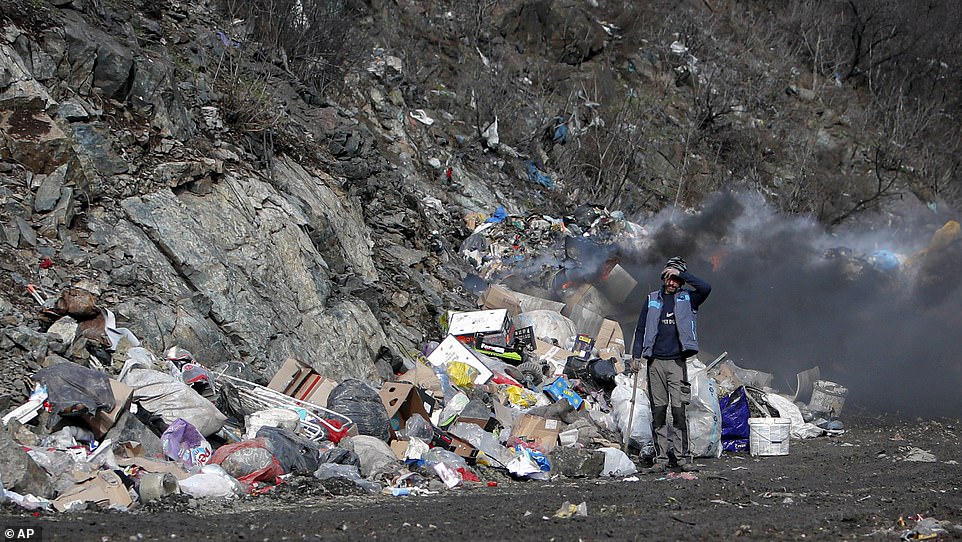 A man looks on as a pile of rubbish collected from the Potpeć accumulation burns behind him, near Priboj, in southwest Serbia, on Friday. The Lim River, which feeds Potpeć Lake, originates in neighbouring Montenegro. It passes through several landfill sites in both countries 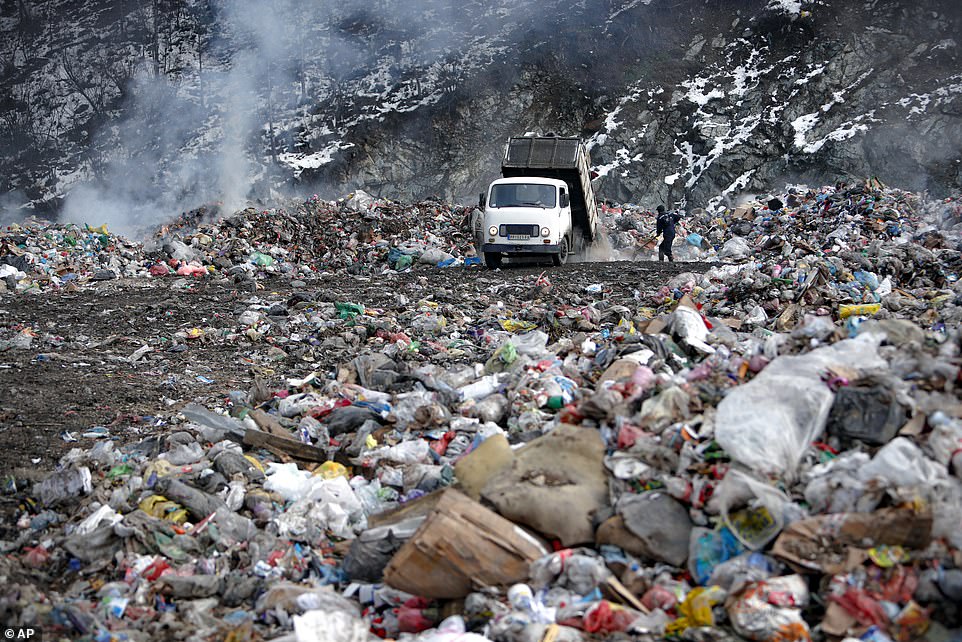 A truck, surrounded by tons of communal waste, unloads more collected from the waters at the Potpeć accumulation near Priboj, southwest Serbia on Friday. The Lim River, which begins in neighbouring Montenegro, feeds Potpeć Lake and has been delivering waste to the accumulation since heavy rains and snow in December and January 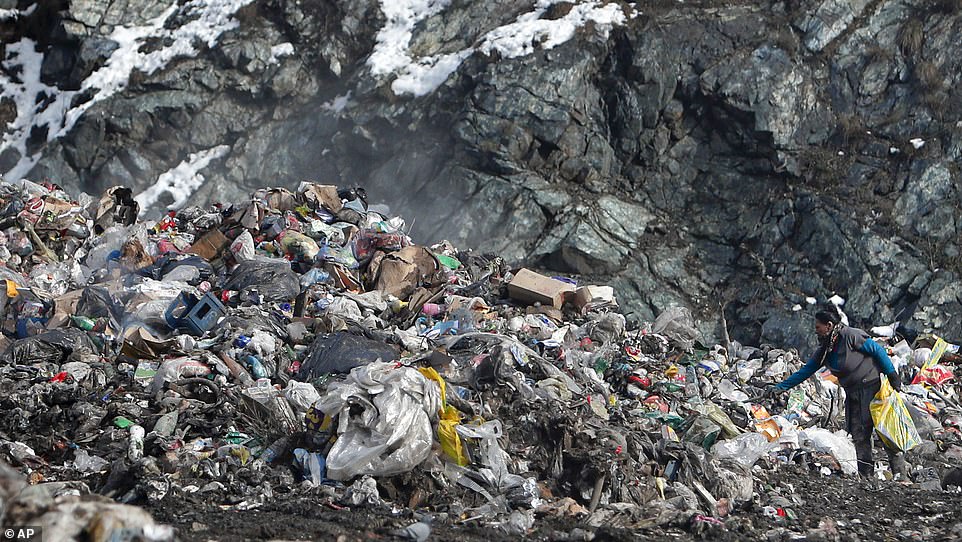 A rubbish collector searches for recyclable material at the landfill near the Potpeć accumulation, neat Priboj, in southwest Serbia on Friday. Serbia and the other Balkan nations are drowning in communal waste after decades of neglect and lack of efficient waste-management policies

Looking at the rubbish-strewn lake, he added that ‘even if only a fraction of that waste ends up in the Lim River, we get this.’

Environmentalists in the Balkans have warned that because most landfills aren’t managed properly they leak toxic materials into rivers, threatening ecosystems and wildlife.

Bosnia too has reported a garbage pileup that endangers the hydroelectric dam on the Drina River, near the eastern town of Visegrad. 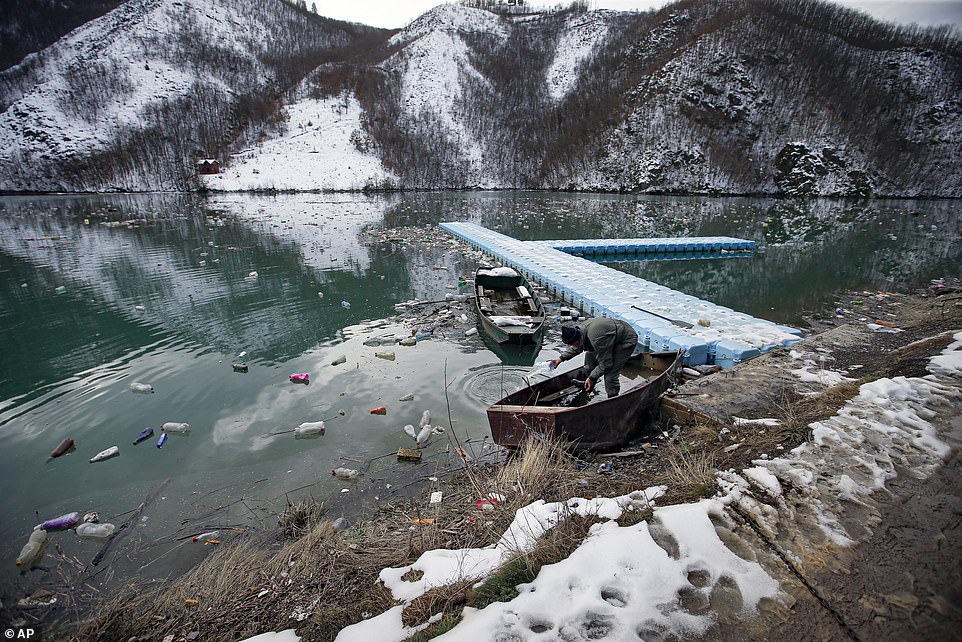 A fisherman prepares his boat, removing rubbish from its hull, at  Potpeć lake in southwest Serbia on Friday. A thick layer of waste has settled on the lake, leading officials to call it the Potpeć accumulation 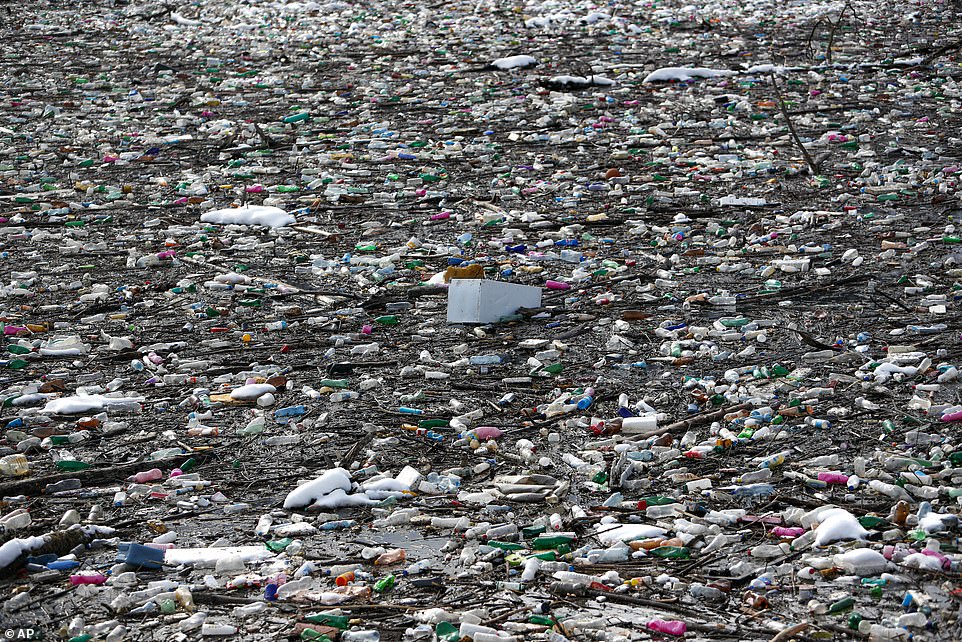 Tons of plastic bottles and other waste float at the Potpeć accumulation, a formation of tons of communal rubbish at the foot of the Lim River hydro-electric dam on Potpeć Lake in southwest Serbia on Friday 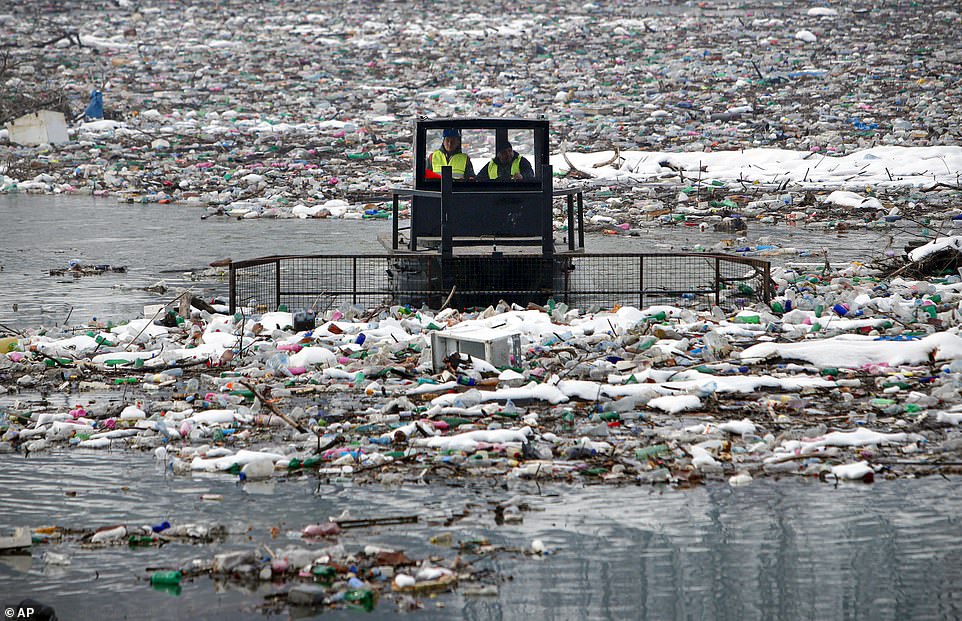 A boat pushes tons of rubbish stuck at the foot of the hyrdo-electric dam on Potpeć Lake. Each year, 45,000 tons of waste are collected from the five municipalities along the Lim River,  according to the Lim River power plant’s manager, Predrag Saponji

The Lim is one of the tributaries of the Drina, which makes their waterways — and garbage flows — closely connected.

The two emerald-colored rivers — the Drina flows along the border between Serbia and Bosnia — during summer are favored by adventurers and water rafters who enjoy the winding waterways and seemingly pristine nature.

While Balkan nations have been struggling to recover following a series of wars and crises in the 1990s, environmental issues often come last for the countries whose economies are lagging far behind the rest of Europe and where public funds are vulnerable to widespread corruption. 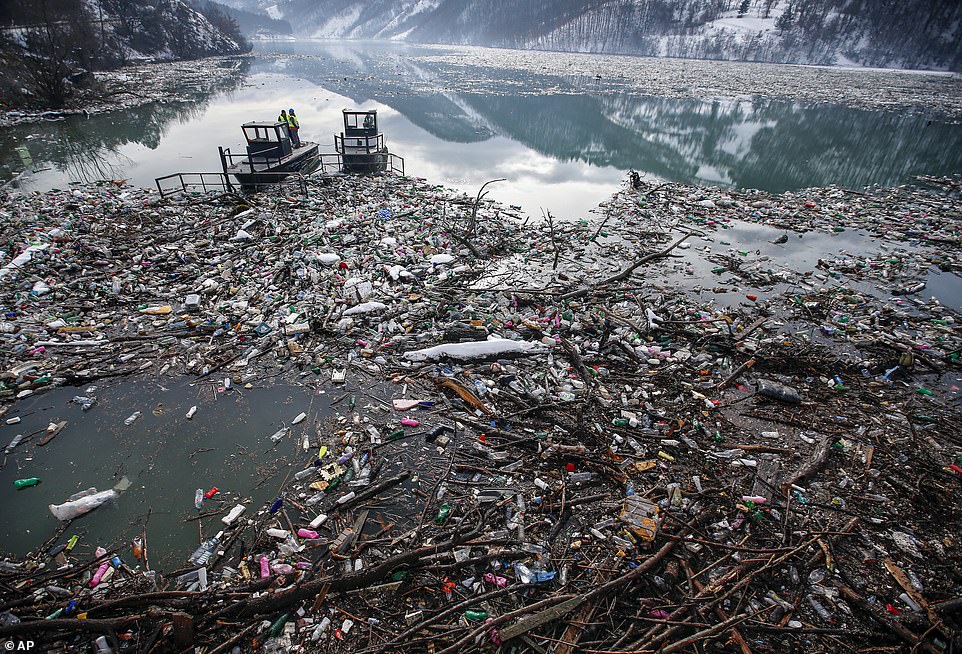 Boats channel tons of garbage towards waiting cranes for the waste to be lifted out of the Potpeć Lake, near Priboj in southwest Serbia. The Balkan nations, which  have struggled to recover following a series of bloody wars and crises during the 1990s, are lagging behind the rest of the world in relation to environmental issues 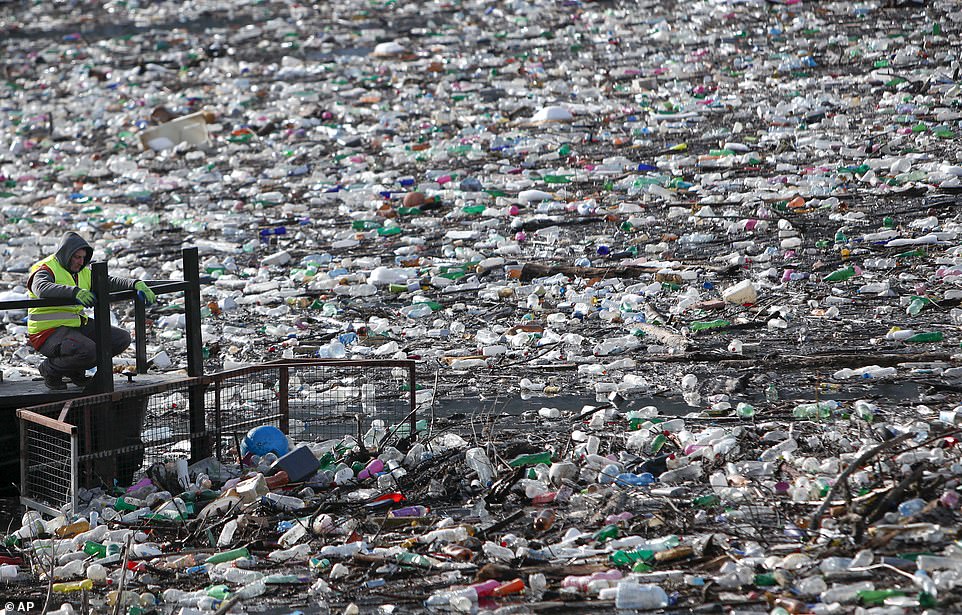 A man crouches as the boat he’s controlling pushes a mass of waste along the water surface at the Potpeć Lake near Priboj in southwest Serbia. Environmental issues tend to be the last concerns for countries with lagging economies. The economies of the Balkan nations are far behind other European countries, and public funds are vulnerable to widespread corruption 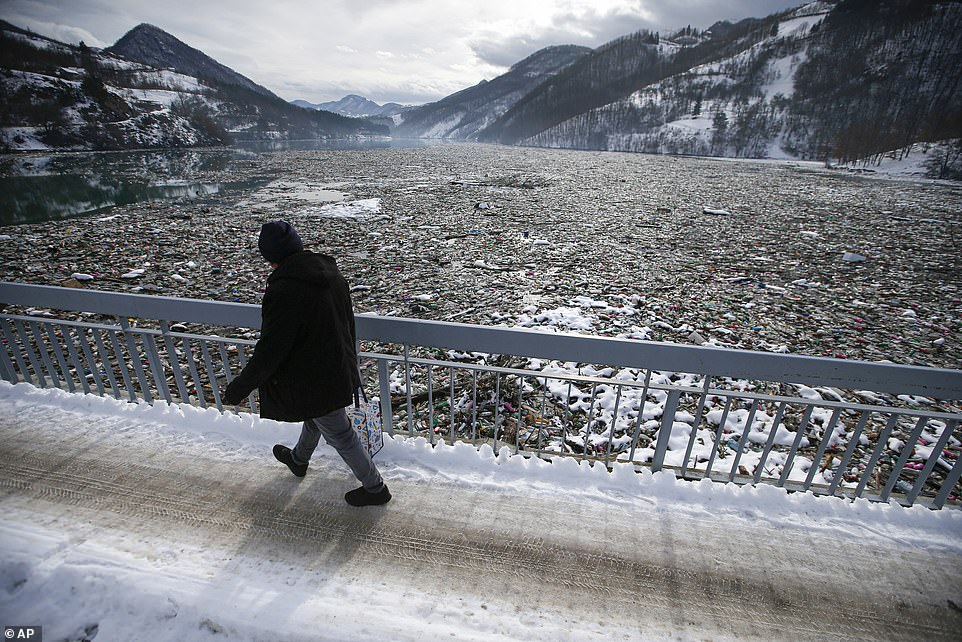 A man walks near to tons of garbage amassed on  Potpeć lake, which has been dubbed the Potpeć accumulation. The Lim River is crammed with 45,000 tons of communal waste each year, according to the power plant’s manager

Jugoslav Jovanovic, from Serbia’s state-run Srbijavode company that is in charge of the country’s water system, put the waste problem down to ‘our neglect and lack of care.’ Landfills are located too close to rivers and are overfilled rather than closed down over the years, he warned.

‘If we find ourselves forced to do this year after year, then that’s not really a solution,’ he said of the clearing operation. ‘We must find common ground and solve this by joining forces.’

Serbia, Montenegro and Bosnia have held meetings on the issue but little has been done. The Balkan countries also face other environmental emergencies, including dangerous levels of air pollution in many cities. 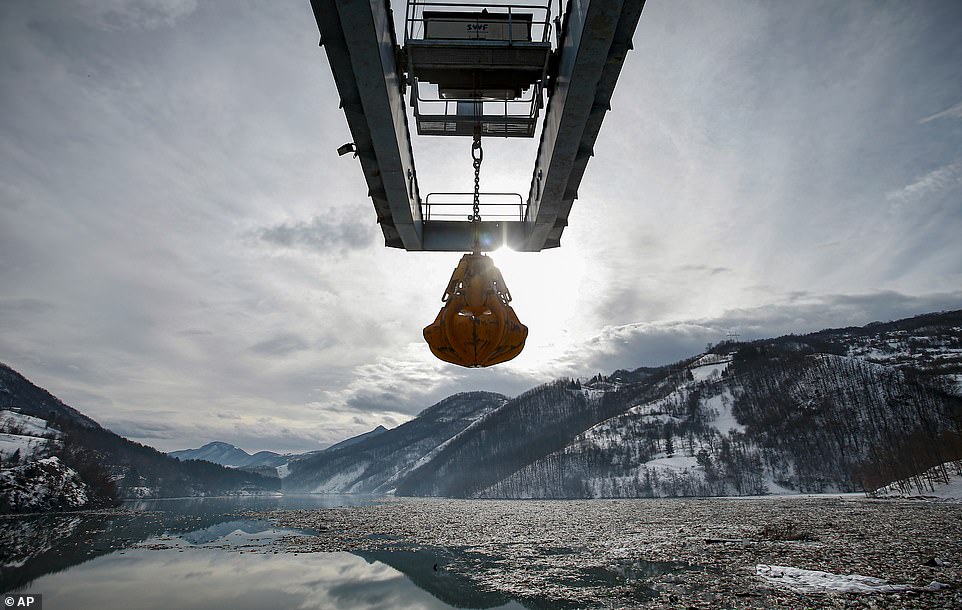 An image taken on Friday shows a view of a crane as it prepares to hoist tons of communal waste from the Potpeć Lake near Priboj, in southwest Serbia. The Balkan nations are also trying to combat other environmental emergencies, including dangerous levels of air pollution in many cities

Experts predict the clearing of Potpec lake will take few weeks, depending on the weather. However, all the garbage from the water will end up again on a landfill in western Serbia.

Goran Rekovic, an activist from the nearby town of Priboj, said raising public awareness about pollution is a key goal, along with ‘institutional and systematic’ solutions. These are needed also if Serbia and other Balkan countries wish to move closer to EU membership.

‘This is not European Union’s obligation. We should not be doing this for them,’ Rekovic said. ‘The reason why we should take care of our environment is for our own future generations.’