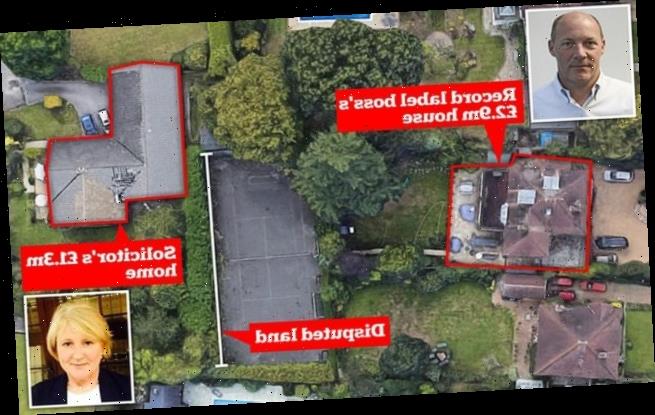 A lawyer faces a £50,000 legal bill after losing a court fight over a two-foot strip of land – with the dispute sparked when her neighbour ‘hacked’ at her ‘lovely thick’ laurel hedge.

Solicitor Julia Lofthouse, 61, said she was ‘upset’ when record label boss Nick Hartley, 61, instructed his gardener to thin the hedge – which stands on her land – without asking for her permission.

Mrs Lofthouse said the trimming robbed her of privacy at her £1.3million home in Esher, Surrey – and allowed her to clearly see into the tennis court of Mr Hartley’s £2.9million house.

And Mrs Lofthouse said a two-foot strip separating the hedge and tennis court belonged to her property – and was only revealed when the hedge was ‘thinned considerably’.

But Mr Hartley took the matter to court, claiming he had not ‘taken advantage and purloined a piece of land’ and saying the ‘walkway’ was always there.

A judge ruled in favour of Mr Hartley and his wife Sheila, leaving Mrs Lofthouse and her husband Mark to pick up the £50,000-plus lawyers’ bills for the court fight.

Solicitor Julia Lofthouse, 61, (left) said she was ‘upset’ when record label boss Nick Hartley, 61, (right) instructed his gardener to thin the hedge – which stands on her land in Surrey – without asking for her permission

Judge Mark Raeside QC told Central London County Court that the Lofthouses had been ‘upset’ by the hedge cutting, sparking the ownership row over the two-foot strip.

But he said the plans were clear and rejected their claim that they own the thin piece of land.

Mr Hartley – director of independent record label group PIAS and a former chief operating officer of the Official UK Chart Company – bought their house for £1.9million and moved in in 2007, the court heard.

Mrs Lofthouse inherited her home, which has an adjoining back garden to Mr Hartley’s property, from her father Peter Lofthouse and moved in in 2011.

The Hartleys’ home is now understood to be worth £2.9million, while the Lofthouses’ substantial bungalow is valued at about £1.3million.

Mr Hartley, 61, told the court that he had had a good relationship with Peter Lofthouse and had agreed to regularly trim the hedge from his side, as well as maintaining the top.

However, he said the strip of land on his side of the hedge – separating it from the fence of his tennis court – was his property.

Mr Hartley had always been able to walk around the bottom of the tennis court to maintain the hedge, he said, and enlisted a professional gardener to cut it back in 2017. 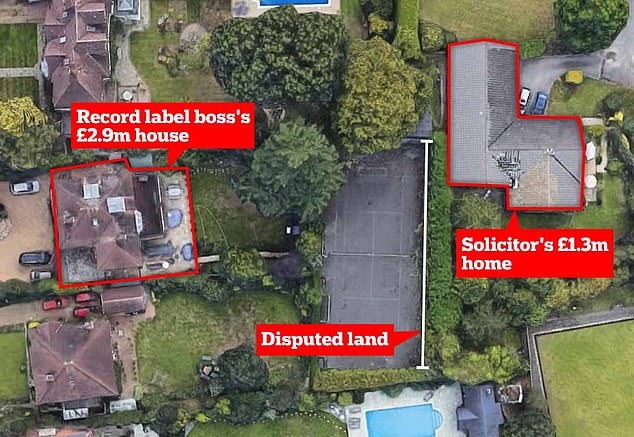 He then noticed a barrier had been put up, preventing access to the strip, and leading to his court battle to assert ownership over the narrow piece of land.

‘The case has been brought because the barrier has been erected to prevent access to what I believe is my land, which is where we would trim the hedge,’ he told the judge in evidence.

He said there had always been a ‘clear gap’ between the wire fence of his tennis court and the hedge.

He had trimmed it from his side since moving in, he added.

‘I carried out maintenance to this walkway until 2017.

‘Then your clients erected a barrier which has prevented any access for our continued maintenance of that,’ he told the Lofthouses’ barrister Paul Wilmshurst.

‘The area has been maintained from day one when I moved into the property.’

But in her own evidence, Mrs Lofthouse insisted that the legal boundary between their gardens is the line of Mr Hartley’s tennis court fence and so he has no right to walk around it to cut the hedge.

She said the ‘big and dense, lovely and thick’ laurel hedge had been there for as long as she could remember and was ‘an important feature’ in her garden.

Mrs Lofthouse told the judge: ‘The hedge had been thinned considerably, we now had no privacy.

‘The hedge is a feature in our garden. It runs most of the way along the side of our garden.

‘It was an important feature and it seemed to me they had gone ahead and cut our hedge without asking.’

Before the cutting, there was no ‘walkway’ around the court and the Hartleys had ‘taken advantage and purloined a piece of land,’ she claimed.

‘Mark and I have not wished to be involved in a dispute with neighbours over a small strip of land,’ she continued.

‘We were very upset about this hacking of this hedge and this creation of this walkway.’ 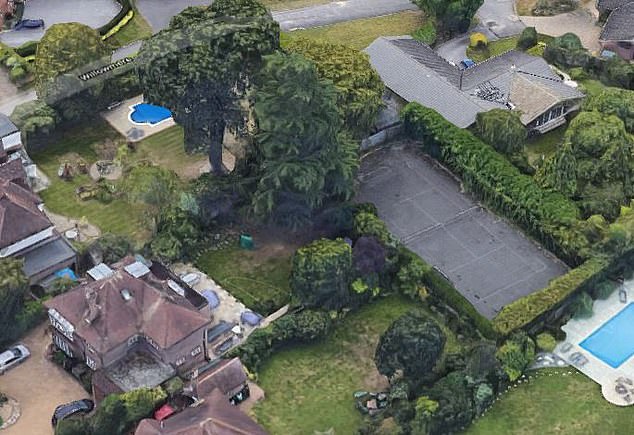 Mrs Lofthouse said the trimming robbed her of privacy at her £1.3million home in Esher, Surrey – and allowed her to clearly see into the tennis court of Mr Hartley’s £2.9million house. Pictured: Mrs Lofthouse’s bungalow, right, and Mr Hartley’s home, left

However, the Hartleys’ barrister Thomas Talbot-Ponsonby pointed out that Mrs Lofthouse had suggested Mr Hartley take her to court during a row over the strip back in 2018.

The Hartleys had also suggested that an independent surveyor could determine the true boundary without needing to go to court, but the Lofthouses refused, Mr Talbot-Ponsonby added.

Giving judgment, Judge Raeside accepted that the hedge must have been maintained from the Hartleys’ side for years even before they moved in.

He said it had been planted in the 1970s and would have grown much much larger in the decades since if it had not been.

It was only the more drastic cut in 2017 that had caused a problem between neighbours.

‘The problem first arose when the more severe cutting of the hedge allowed Mr and Mrs Lofthouse to look into the tennis court,’ he said.

‘It was this that upset them and gave rise to what is now a court action.’

He said experts who had looked at historical plans of the properties agreed that the boundary was not the line of the tennis court, but a line outside the court, as the Hartleys claimed.

An elderly neighbour – who knew the area well – had also given evidence of how she had been able to walk around the tennis court more than 50 years ago.

‘I reject the assertion that the wire fence of the tennis court is in fact the boundary with [Mrs Lofthouse’s home],’ he ruled.

He said the walkway along the bottom of the court belongs to the Hartleys.

The judge ordered that surveyors attend the properties and lay out markers to show the true boundary line.

He said the Lofthouses would have to pay the Hartleys’ £46,000 lawyers’ bills of the case, on top of their own.