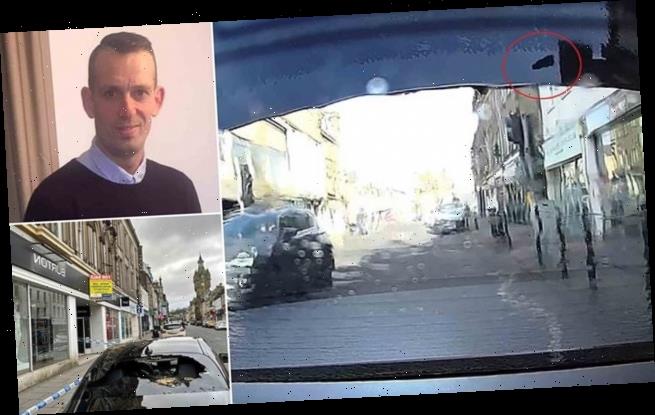 This is the heart-stopping moment a loose chimney toppled off a roof and fell through a rear window of a Mercedes car, narrowly missing the passengers inside.

Steven and Sharon Lothian were shocked when the stack smashed through their car while they were parked up on Hawick High Street yesterday.

Steven, 44, from Hawick in the Scottish Borders, said he was ‘five seconds’ away from standing exactly where the large piece of stonework fell. 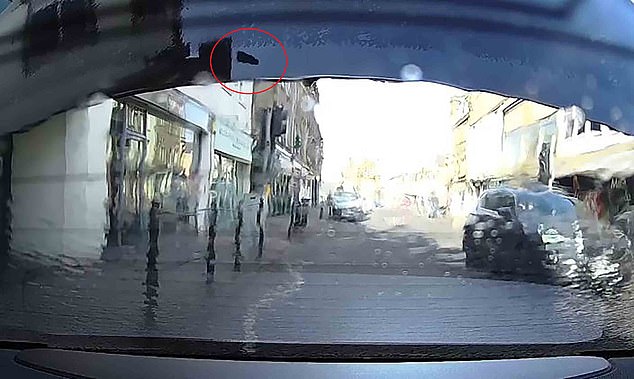 Steven, 44, and Sharon Lothian were shocked when a chimney stack smashed through their car while they were parked up on the high street in Hawick in the Scottish Borders 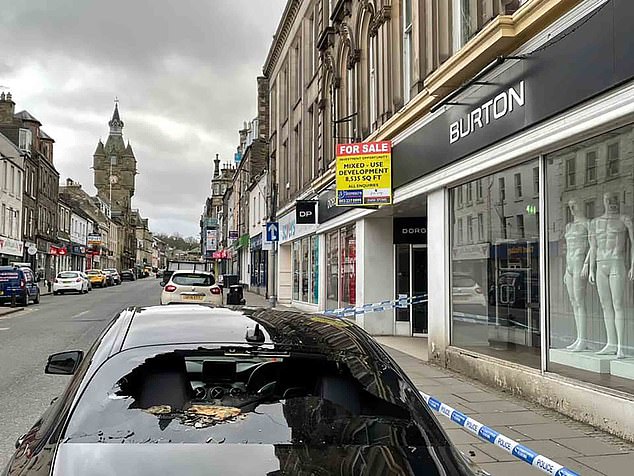 The 44-year-old’s rear dashcam managed to capture the stone falling from the top of the Burton and Dorothy Perkins clothing store building.

In the video, the rear bonnet pops up automatically as Steven was just about to leave to grab something from the boot.

As the bonnet swings open, the chimney can be seen toppling off the edge of the building in the reflection.

It collides with the boot, smashing through the rear window in the process and knocking the dashcam off from its holder. 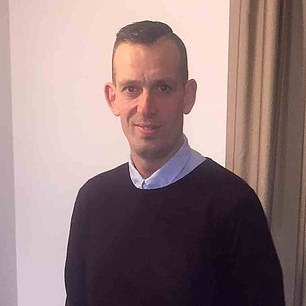 As it does this, the car violently shakes and a terrified Sharon can be heard shouting: ‘What the f***!’

After a few seconds of silence, she continues: ‘What the hell was that?!’

Subsequent images taken by Steven show the damage caused by the loose stonework with the rear window of his black Mercedes completely ruined. S

Steven,said: ‘I went out for some shopping and I had just parked up.

‘Opened the automatic boot about to get out and it came crashing down. ‘Five seconds later I would be where it landed.’

He continued: ‘I’m waiting on insurance coming back to me. They said it will affect my no claims and the price will go up even though it’s not my fault because no-one else was involved.’ 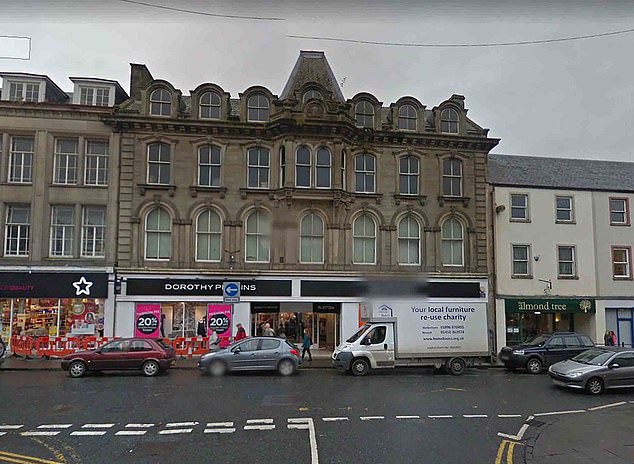 As the bonnet swings open, the chimney can be seen toppling off the edge of the building in the reflection. Pictured: The street where the chimney fell in Hawick

Steven’s image of his car made its way onto Facebook and left social media users stunned.

Nicola Lynn said: ‘Very lucky no one was hurt. Someone watching over you. Would be getting the lottery on.’

Emma Law posted: ‘How terrifying! Glad you’re ok… Someone definitely looking out for you today!’

Lorraine Reay commented: ‘God, imagine if it had landed on a person geezo.’