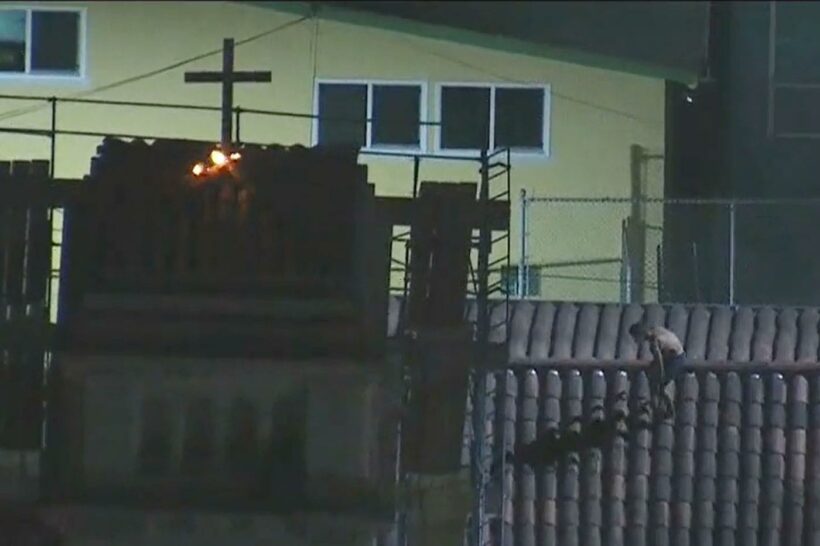 A man wearing only underwear and one sock set fire to a cross on top of a Los Angeles church, then jumped across rooftops in a bizarre standoff with police.

The 25-year-old man could be seen in news helicopter footage taking two death-defying leaps from building to building – and dangling from what appear to be electrical wires on Wednesday night.

Cops finally arrested the man, who reportedly refused to give his name, about two hours after he set ablaze the cross on top of St. Mary’s Catholic Church in the Boyle Heights area of the city.

A security guard on his second day on the job told CBS Los Angeles that he saw the man as he made his way up scaffolding to the top of the four-story church and thought at first he might jump.

“So the first thing I said was, ‘Don’t do it then, because I’m scared of heights and I’m not coming up to get you.’”

From the roof the man tossed shingles down at authorities gathered below and allegedly yelled that people wanted to kill him, CBS reported.

Police caught up with the man after he broke a window and climbed into an apartment that had just been evacuated, The Los Angeles Times reported. The initial call came in at about 8:30 p.m. and the man was arrested two hours later, according to the newspaper.

A spokesperson for the Archdiocese of Los Angeles told Fox 11 the damage was still being assessed at the century-old church.

“The church building incurred some damage, including fire damage to the roof of the bell tower and some broken stained-glass windows, but thankfully no one was in the building at the time,” Itzel Magana said.