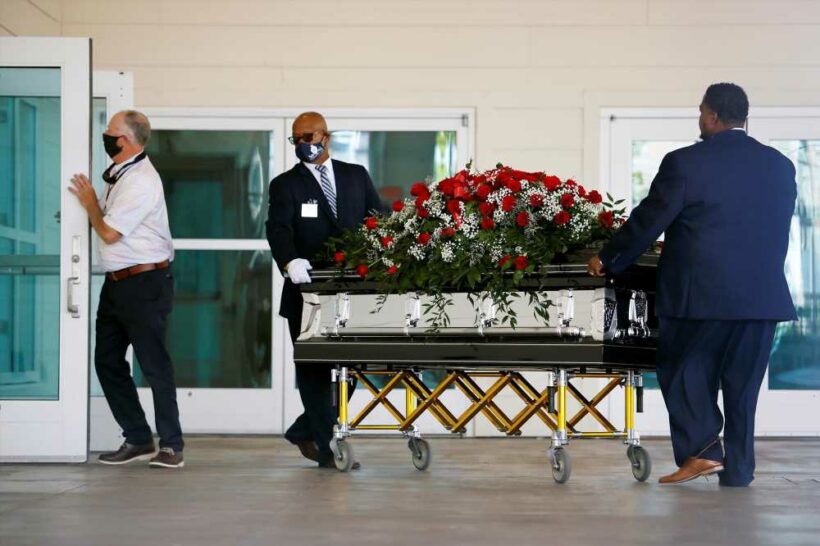 Mourners gathered in North Carolina Sunday for a public viewing and memorial service for Andrew Brown Jr., the man shot dead by deputies last month — as authorities issued a warning to protesters to remain peaceful.

Dozens of friends, relatives and neighbors flocked to the Museum of the Albemarle in Elizabeth City for the viewing, which will be followed by a private funeral service on Monday at the Fountain of Life Church, ABC News said.

Brown, 42, a father of seven, died April 21 after sheriff’s deputies executing a search warrant at his home fatally shot him as he tried to flee in his car.

On Sunday, marchers escorted his family to the public viewing, which comes on the 11th day of largely peaceful protests over Brown’s death.

“Elizabeth City is really standing tall in this moment,” the Rev. Greg Drumwright, a local civil rights activist was part of the escort, told WTVD-TV on Sunday.

“The sheriff’s office will take many steps to ensure that peaceful protesters are able to exercise their rights,” Wooten wrote. “However, those who choose to protest will not be permitted to block intersections or highways and put themselves and others in danger.”

“We hope that any protests this weekend are peaceful,” the sheriff added. “However, we are prepared to ensure the safety of our community in the event of unlawful disruptions.

Wooten on Thursday released the names of the three deputies who fired their weapons as Investigator Daniel Meads, Deputy Sheriff Robert Morgan, and Cpl. Aaron Lewellyn.

Four others who were also at the scene were reinstated to active duty after investigators determined they had not fired their weapons, Wooten said.

Brown’s family was allowed to view a 20-second bodycam clip of his death last week, calling it “an execution,” and has pushed to have all footage of the incident released.

Last week, a local judge refused to release videos and other evidence tied to the shooting for 30 to 45 days but said Brown’s family may view it within 10 days.

However, the family will not be provided with copies, the judge said.

Earlier Sunday, Brown’s family held a private viewing at Horton’s Funeral Home and Cremations Chapel in Hertford, about 15 miles from where Brown was killed.