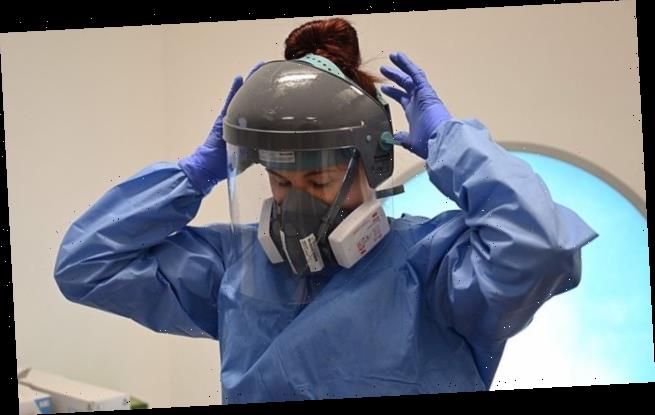 Hospitals in England will be able to redeploy staff who refuse to get their Covid vaccine under new plans drawn up by NHS bosses.

An internal document said local leaders can move workers to wards where they have a smaller chance of catching or passing Covid to patients.

This may include taking them off cancer or dementia wards, for example, where patients are extremely vulnerable to the virus.

If staff are already on low-risk wards then they should be put through the latest infection control training and provided personal protective equipment (PPE) and a tight-fitting mask, the document said.

The new guidance, seen by the Health Service Journal (HSJ), said: ‘In addition to the above, if the risk to the member of staff, their colleagues or patients is still very significant, they could be moved into a less exposure-prone setting as an option.

‘These sensitive conversations may require input from local trade union representatives and HR.’

Uptake of the Covid jabs has been better than expected among health workers in the UK — more than nine in 10 frontline NHS staff have had at least one dose so far.

Frontline health staff were included in the top four priority groups for the vaccine because, even though they are not more likely to catch or die from Covid, there is always a risk they will pass the disease onto ill and frail patients. 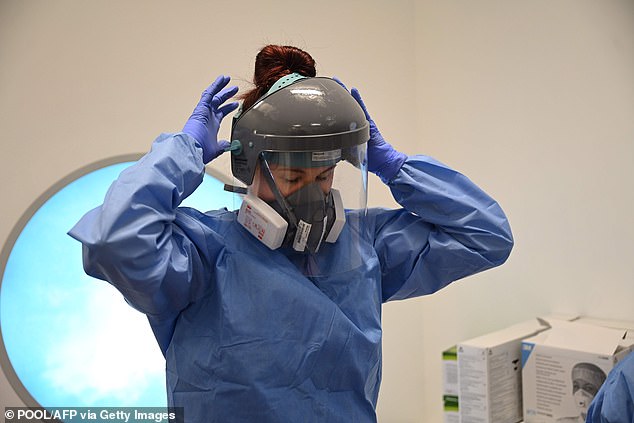 If staff are already on low-risk wards then they should be put through the latest infection control training and provided personal protective equipment (PPE) and a tight-fitting mask, the new rules say (stock image)

Earlier this month, the health service in England called for managers to have one-to-one conversations with staff who refuse the Covid-19 vaccine before March 12.

The leaked email called on NHS trusts to ‘redouble our efforts in keeping each and every one of our staff safe’.

NHS England’s chief people officer Prerana Issar wrote: ‘As a result of your continued hard work we have seen an uptick in staff vaccination numbers, with nine out of [10] eligible staff now vaccinated.’

She added: ‘There are, however, a number of staff who have declined the first dose of the vaccine.

‘As the evidence grows around the effectiveness of the vaccine and its ability to reduce transmission, we must now redouble our efforts in keeping each and every one of our staff safe…

‘So, we are asking that every staff member who declined the vaccine should now have a one-to-one conversation with their line manager to explain the powerful protective effects of the vaccine.’

While uptake among NHS staff has been high, the number of care home workers refusing the Covid vaccines has caused concern among ministers.

Nationally, about a third are still to get the jab. Uptake is worst in London, where only 55 per cent of eligible staff in care homes have been inoculated.

Vaccine hesitancy among black, Asian and minority ethnic groups, who make up a large proportion of care staff, is believed to be behind the poorer uptake, particularly in the capital.

Care homes have now been given the power to refuse to hire staff who won’t accept the vaccine.

The Justice Secretary Robert Buckland said last month providers were legally allowed to make vaccination a condition of employment as long as they could provide a ‘clear rationale’.

He added the Government would not enforce ‘no jab, no job’ policies on care home workers, but added that it would not prevent employers blocking future contracts for those who refuse the vaccine.

Care home residents are most vulnerable to Covid because their of age and frailty, while they often suffer from serious underlying conditions including dementia. They have made up more than quarter of all virus deaths during the pandemic in Britain.

Have a shot! Ministers ‘to use Premier League footballers to encourage under-30s to get Covid vaccines’ amid fears many don’t see virus as a threat

Premier League footballers will be used in a PR blitz to encourage young Britons to get vaccinated against Covid, it was claimed today.

Culture Secretary Oliver Dowden has reportedly written to top clubs to ask for their help in the mammoth roll-out.

There are fears that uptake will be lower in younger adults, who are least likely to fall seriously ill or die from Covid. But their participation in the programme is essential because they are among the most likely to carry and spread the disease.

A Whitehall source told The Sun newspaper that the Premier League was ‘involved’ in the scheme to boost uptake in under-30s.

The insider added that footballers would be used because they are ‘people younger groups look up to’.

The Sport Select Committee chairman told the newspaper: ‘This campaign should… enlist the help of major sporting figures from the likes of the Premier League in order to put out the message that vaccination is safe, and the right thing to do for yourself and others.’

Healthy under-30s aren’t due to be invited for their Covid vaccine for at least another month, with the roll-out currently focused on over-55s.