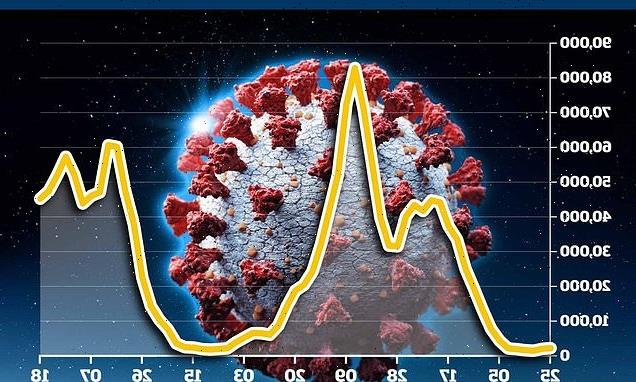 The number of Britons falling ill with Covid every day fell five per cent last week, according to one of the country’s biggest surveillance projects.

King’s College London scientists estimated 45,081 people caught the virus every day in the week to September 18, down from 47,276 in the previous seven-day spell.

But the data showed there was an uptick in infections among under-18s, in yet another sign of a delayed back-to-school wave of infections. Experts warned cases would spiral after children returned to classrooms in England, Wales and Northern Ireland in September.

Professor Tim Spector, who leads the study, warned today that the UK still had one of the highest infection rates in Europe and called for the Covid symptoms list to be updated to help get a handle on infections.

He said the classic three symptoms — cough, fever and loss of taste and smell — were rarer these days thanks to vaccines which had made the virus more like a bad cold. He said other warning signs like a sore throat, runny nose and sneezing should be added to the list.

The symptom-tracking apps figures differ from the Department of Health dashboard, which shows Covid cases have risen week-on-week for the last five days. But both are pointing to a surge in cases among youngsters.

Experts have warned the study — also run by health data science company ZOE — is becoming less reliable because vaccines have made it harder to pick out Covid from other respiratory infections like flu. Almost nine in ten over-16s have got at least one dose of the jab.

Latest figures from Test and Trace showed the number of people that tested positive for the virus in England fell 22 per cent last week, after there were 161,923 positive tests. This was the lowest number since the end of June. 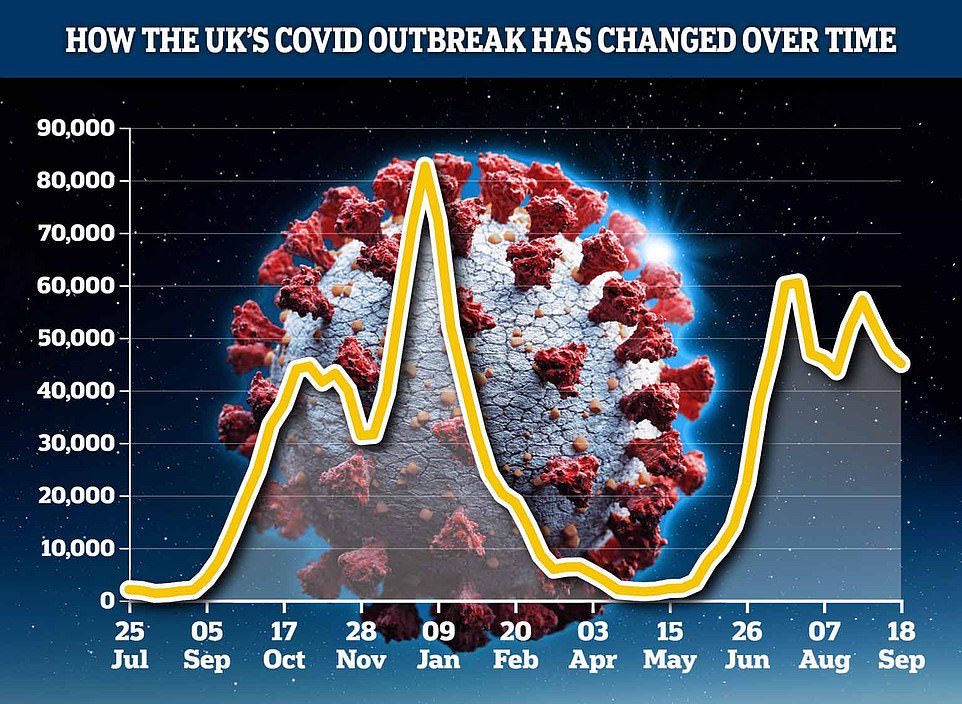 King’s College London scientists estimated 45,081 people caught the virus every day in the week to September 18, down from 47,276 in the previous seven-day spell 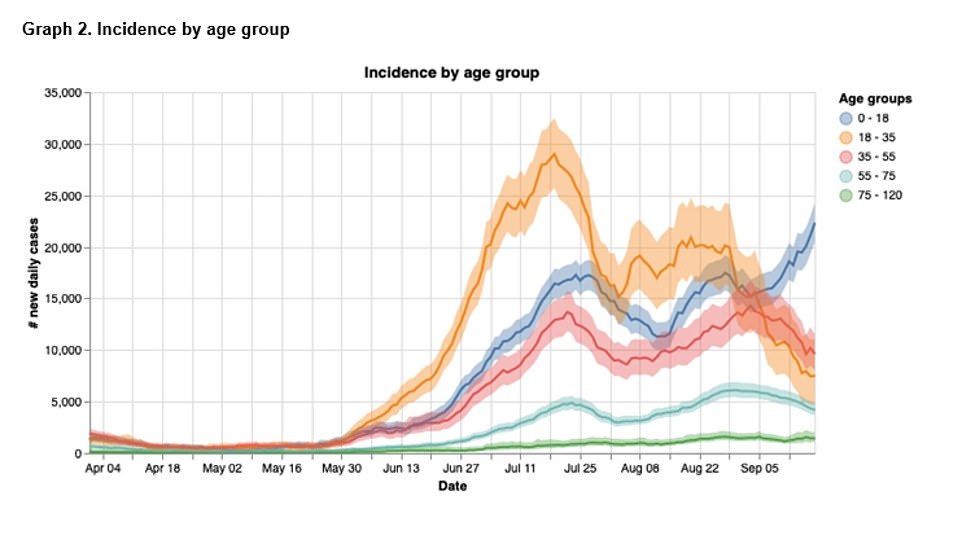 But the data showed there was an uptick in infections among under-18s, in yet another sign of a delayed back-to-school wave of infections. Experts had warned children returning to classrooms would trigger a spike in cases 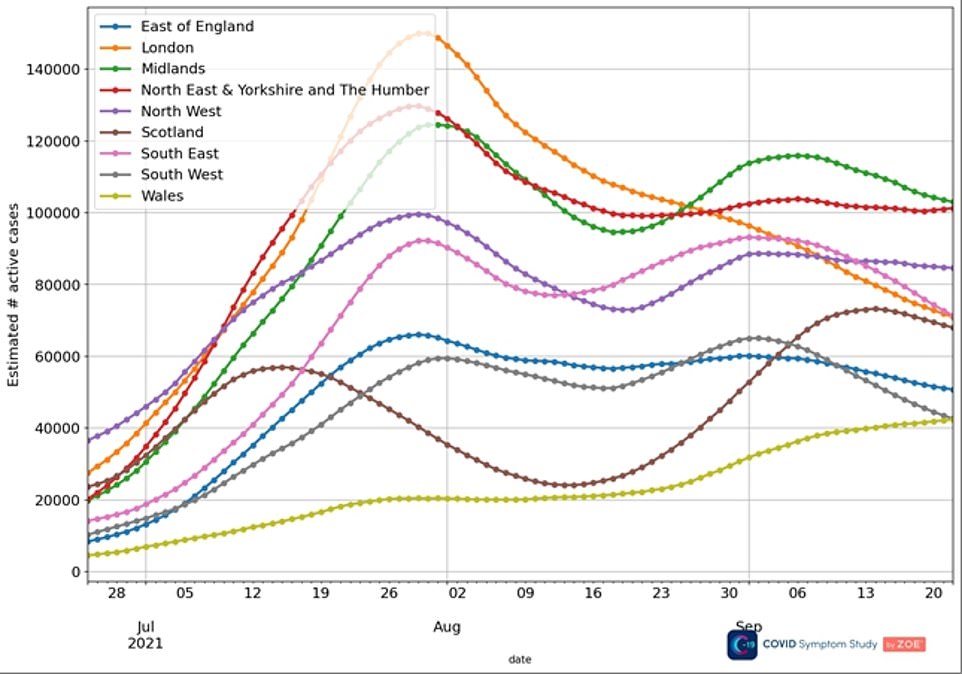 The above graph shows the study’s estimated of Covid cases by regions over time. It suggests they are flatlining in all areas 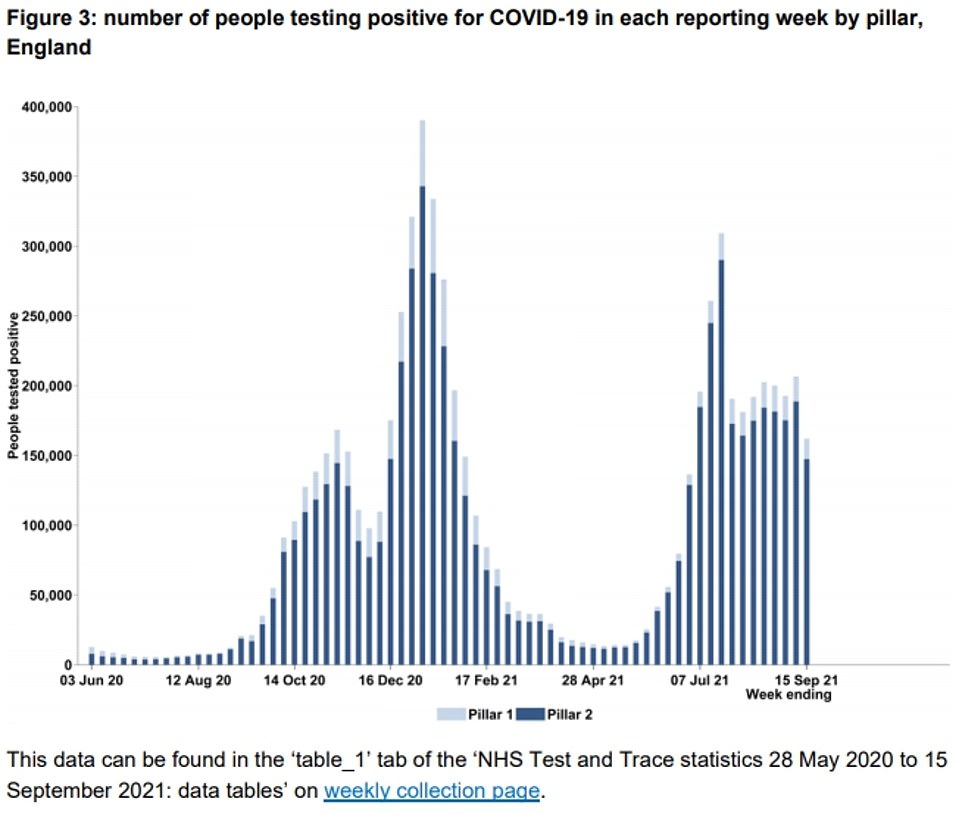 Latest figures from Test and Trace showed Covid cases in England fell 22 per cent up to September 15, after 161,923 cases were recorded through testing. Infections are now at their lowest levels since the end of June. 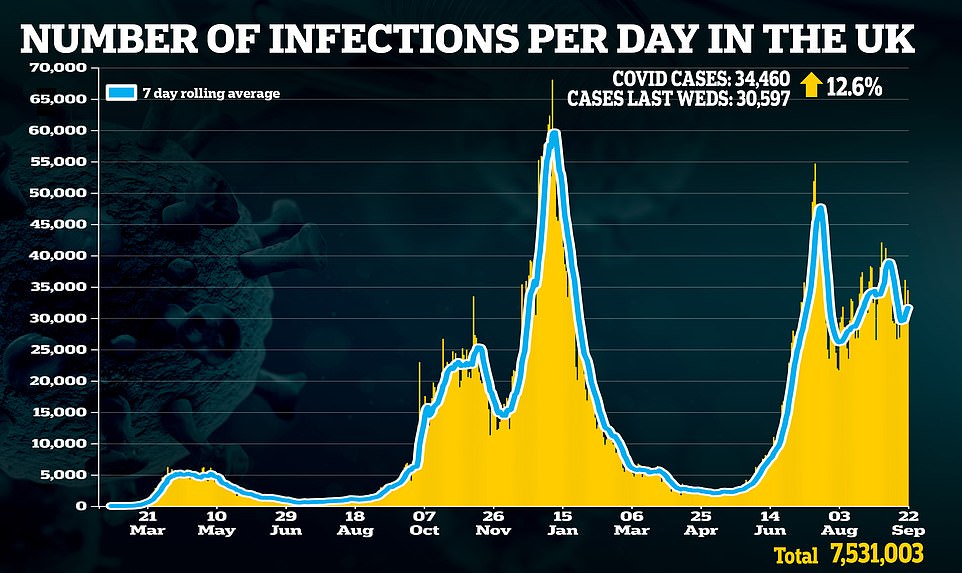 Department of Health data contradicts the ZOE study, showing that Covid cases rose week-on-week for the last five days. But it is picking up a surge among younger age groups, which matches the study

Professor Spector said: ‘The UK still has more cases than most of Europe and I believe this is for two main reasons; the first is a lack of masks and social distancing and the second is because we’re ignorant of the symptoms.

‘We should be looking out for things like sore throat, runny nose and sneezing.

‘The classic three — cough, fever and anosmia [loss of taste and smell] — are rarer these days, yet the government has done nothing.

Britain’s daily Covid cases have risen 13 per cent in a week in another sign that the back-to-school wave has finally started to kick in — but hospitalisations and deaths have fallen by nearly a fifth.

Department of Health statistics showed another 34,460 infections were spotted yesterday, up on the 30,597 recorded last Wednesday.

It marks the fifth day in a row that positive coronavirus tests have ticked up week-on-week, suggesting the UK may now be seeing the effect of the return of millions of pupils in England, Wales and Northern Ireland. Scientists had warned that the reopening of classrooms would cause a sharp rise in infections.

Meanwhile, latest Covid hospitalisation figures showed there were 747 admissions on September 18, down 17 per cent on the same time last week. And another 166 Covid deaths were recorded yesterday, mirroring the drop seen in hospital admissions.

The figures came as Professor Chris Whitty warned yesterday that almost all unvaccinated pupils were likely to catch Covid in the future.

Explaining to MPs that the risks of not jabbing 12 to 15-year-olds outweighed the harms, England’s chief medical officer denied extending the roll out to these age groups was a political decision.

More than 120,000 pupils were off school last week due to Covid, figures showed yesterday, or 1.5 per cent of total pupils in Britain’s schools. Almost 92 per cent of pupils were in class.

‘One in 95 people in the UK have Covid. If we don’t wake up to the fact these cold-like symptoms could be Covid, we will continue to keep numbers high, putting unnecessary strain on an exhausted NHS and letting more than 170 people die every day.’

He added: ‘Another week of declining cases is positive news, but the decline is slow and unpredictable. As predicted, the return to school has led to climbing cases in the young.

‘While it’s true that Covid in children is mostly mild, the real issue is their ability to pass on the virus to those who are most vulnerable. ZOE Covid Study data shows protection waning in those who were first in line for a vaccine, and so their risk of getting infected is rising.’

The study also estimated infections had risen slightly among 30 to 39-year-olds, but that the age group where cases were increasing most were 0 to 19-year-olds — in another sign of a back to school wave.

They said their figures were based on reports from more than 750,000 Britons who have logged into the app to say they felt well or entered their results from swabs.

The drop in Covid cases differs to figures from the Government dashboard which show cases have risen for the past five days week-on-week, in a sign of a possible back-to-school wave.

Department of Health statistics showed another 34,460 infections were spotted yesterday, up 15 per cent from the 30,597 recorded last Wednesday.

Scientists had warned that the reopening of classrooms at the start of September in England, Wales and Northern Ireland would cause a sharp rise in infections.

Meanwhile, latest Covid hospitalisation figures showed there were 747 admissions on September 18, down 17 per cent on the same time last week. And another 166 Covid deaths were recorded yesterday, mirroring the drop seen in hospital admissions.

England and Wales both saw their Covid cases surge yesterday compared to the same time last week, by a quarter and eight per cent respectively. England’s data shows cases are rising fastest in 10 to 14-year-olds.

Test and Trace figures also showed some 12 per cent of people — or one in eight — who were transferred to the system were not reached, meaning they were unable to provide details of recent contacts.

A total of 87.3 per cent of people who were tested for Covid-19 in England in the week ending September 15 at a regional site, local site or mobile testing unit — a so-called ‘in-person’ test — received their result within 24 hours. This was up from 81 per cent the previous week.

It came after the woman who created the Oxford vaccine said Covid was unlikely to mutate into a much deadlier variant and will eventually just cause the common cold.

Professor Dame Sarah Gilbert said ‘there aren’t very many places for the virus to go to have something that will evade immunity but still be a really infectious virus’.

She said viruses tend to ‘become less virulent as they circulate’ through the population, adding: ‘There is no reason to think we will have a more virulent version of Sars-CoV-2’.

Dame Sarah said the virus which causes Covid-19 will eventually become like the coronaviruses which circulate widely and cause the common cold. 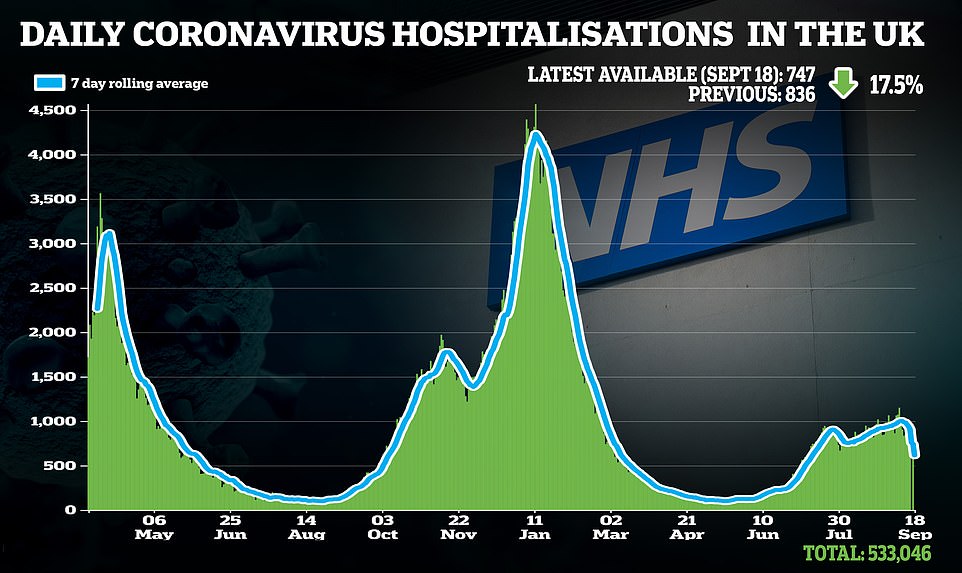 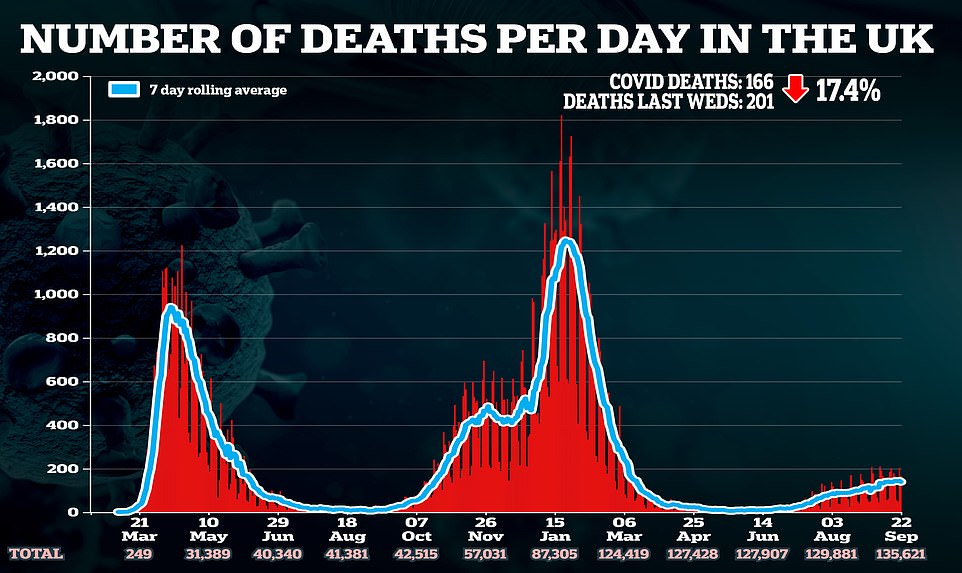 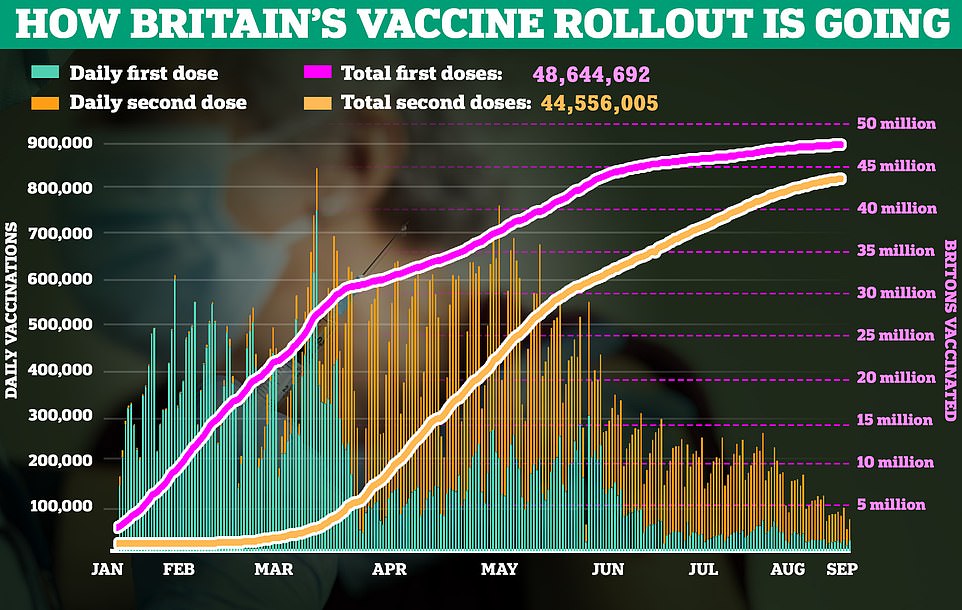 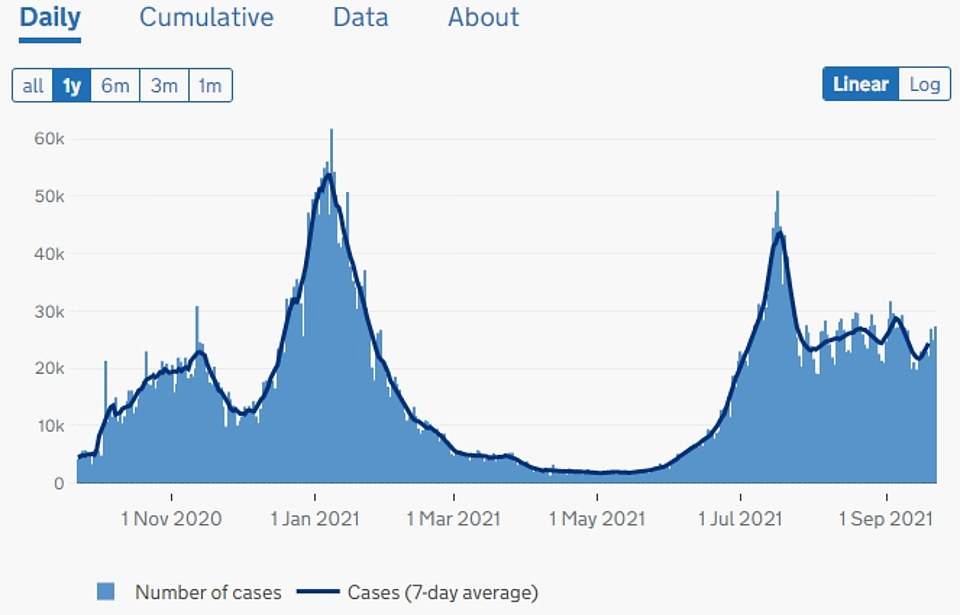 ENGLAND: The above graph shows Covid cases in England by date reported. The latest figures show the country’s cases have surged by a quarter in a week after 27,317 were recorded today. It schools returned at the start of September 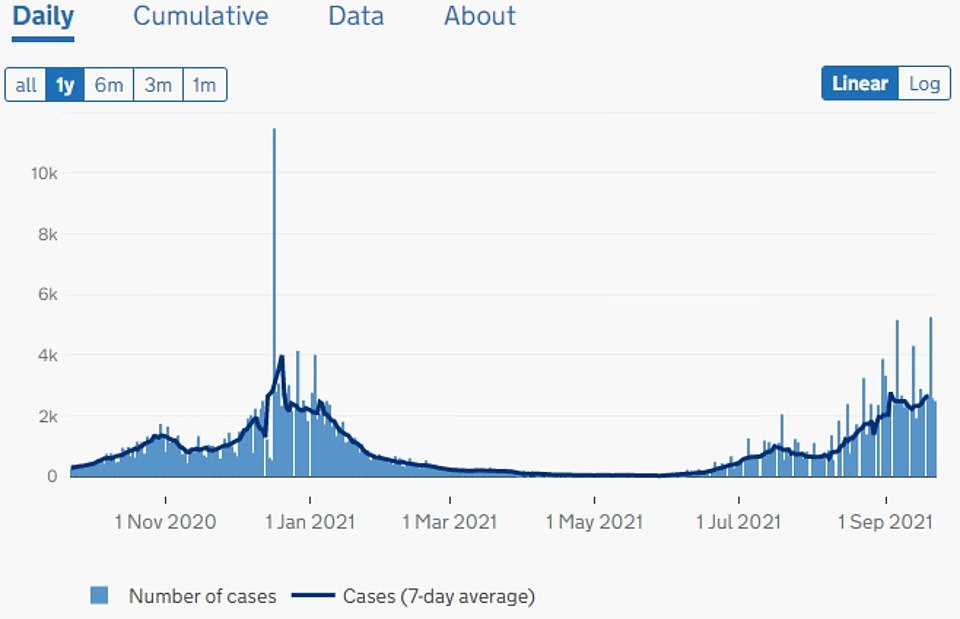 WALES: The above graph shows Covid cases in Wales by date reported. The latest figures show Covid cases in this country are also starting to increase, after schools returned in early September 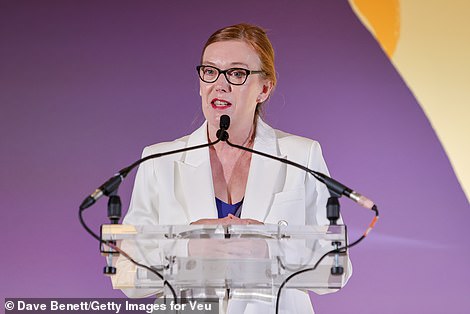 Speaking at a Royal Society of Medicine seminar, Dame Sarah said: ‘We already live with four different human coronaviruses that we don’t really ever think about very much and eventually Sars-CoV-2 will become one of those.

‘It’s just a question of how long it’s going to take to get there and what measures we’re going to have to take to manage it in the meantime.’

The 59-year-old led the team at Oxford University’s Jenner institute which created the lifesaving Oxford-AstraZeneca Covid-19 vaccine, the most widely distributed jab in the world.

Dame Sarah also revealed she is struggling to get funding to help prevent future pandemics.

The scientist, who specialises in the development of jabs against emerging viruses, said urgent investment was needed to prevent other infectious diseases spreading around the world.

She said: ‘We’re still trying to raise funds to develop other vaccines that we were working on before the pandemic, against diseases that have caused outbreaks in the past and will cause outbreaks in the future.

‘We are being financially supported for our ongoing work against Covid… but when we try to return to projects we were working on before coronavirus we’re still trying to get funding.’

Meanwhile, she said the very rare blood clots linked to the AstraZeneca jab have not been seen in the same rates in other parts of the world.

She also suggested that primary work on a tweaked vaccine to combat the Beta variant of the virus only gave a ‘slightly better’ immune response than the original vaccine, when given as a third dose to people who had already had two jabs of the AstraZeneca vaccine, but the data is still being collected.

In June, then health secretary Matt Hancock said the Government was in commercial discussions with the pharmaceutical giant over the variant vaccine.

Dame Sarah was also asked which of her titles she is most proud of, and said: ‘Professor, definitely.’

The scientist’s comments came as England’s chief medical officer said almost all unvaccinated children will become infected with Covid at some point and said the others would get it ‘sooner or later’, insisting that vaccines will cut that risk.

Being grilled by politicians about his decision to recommend all over-12s are given Covid jabs, Professor Whitty insisted the move was made purely due to the benefits children would get.

He denied the advice — which overruled guidance from No10’s top vaccine advisory panel which recommended youngsters weren’t jabbed — was political.

Professor Whitty said: ‘The great majority of children who have not currently had Covid are going to get it at some point.

‘It won’t be necessary in the next two or three months but they will get it sooner or later because this is incredibly infectious. Vaccination will reduce that risk.’