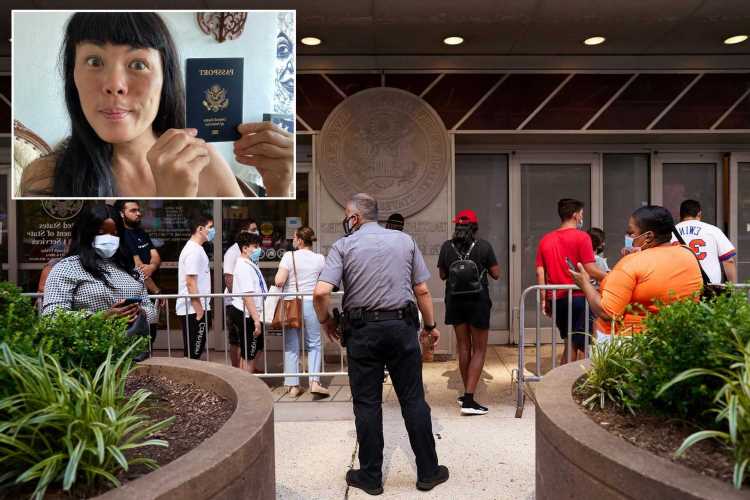 The hardest appointment to book in New York may be a slot at the Passport Agency, where desperate travelers are lining up for hours to get their travel documents.

Some 30 people stood outside the 376 Hudson St. office Thursday morning, even though walk-ins were not allowed. Others are trading tips in Facebook groups or besieging their Congressional reps for help.

The State Department is still operating under some COVID-19 staffing restrictions, which have all but eliminated the ability to get a passport in person within three days of an international trip, which was the norm pre-pandemic. The waiting time to get a new passport or renewal through the mail is now 18 weeks — more than double what it was before COVID-19 hit.

Even paying an extra $60 for expedited service doesn’t always help.

“I’m so nervous, I have to travel Sunday,” Bronx resident Mirla Warrell said Thursday outside the Manhattan passport office where she was hoping to get inside. “They are not giving any information to me when I call.”

Warrell arrived with plane tickets to prove she had a trip scheduled to Honduras to see her father, who is hospitalized. Her daughter’s passport, which she applied for in June, never arrived despite spending more than $200, including the rush service fee.

Maria Rodriguez, a teacher from Queens, applied for her passport in April to go to Spain and see a nephew who is a doctor and will treat her back pain.

“I figured four months before my trip would be enough time,” said Rodriguez, who brought a chair to sit on while waiting, because she cannot stand for long periods. “I wait on the phone for five hours, then after five hours they tell me there are no appointments left and that I have to try again.”

Bronx resident Mircis Gomez who was hoping to go to the Dominican Republic Tuesday for a cousin’s wedding, waited seven hours, but was not allowed in and did not see anyone else without an appointment enter.

The State Department says anyone with a life or death emergency can contact them to get an immediate passport, and it offers a limited number of in-person appointments for non-emergency travel within three days of the trip.

Jesse Hansen, a middle school principal from San Francisco, arrived at the passport office Thursday straight from Kennedy Airport with all his luggage. His family had gone on to Costa Rica for a vacation, but his passport was expired and he couldn’t leave.

The dearth of options is leading some travelers to join Facebook groups like US Passport and Visa Services where they are trading tips and appointments much like some did to get a COVID-19 vaccine slot during the winter.

Brooklyn resident Victoria Linchong, who is scheduled to fly to Berlin this month to see her boyfriend after seven months apart, started to panic last month when her passport didn’t arrive.

Through the Facebook group, she learned she might have better luck trying to get an appointment if she called the State Department, which she did more than 50 times beginning at midnight one evening before giving up and starting again at 5 a.m.

She found a open slot — in Michigan.

“I was about to pay for a flight to Detroit,” she said. “I was ready to almost do it.”

Linchong kept trying and managed to score a New York City slot and then learned her passport was on the way in the mail. She received it Tuesday and “gifted” her Manhattan appointment to another traveler.

Rep. Nicole Malliotakis (R-Staten Island) said her office has received about 250 requests for passport help since June and has resolved most of them.

“The State Department must get their employees back to work to handle the backlog,” Malliotakis said.

“We have no higher priority than the health and safety of our employees and our customers as we continue to move towards resuming our normal operations,” a State Department spokeswoman said. “We urge the public to plan ahead and apply well before any scheduled travel because of our limited appointments. “