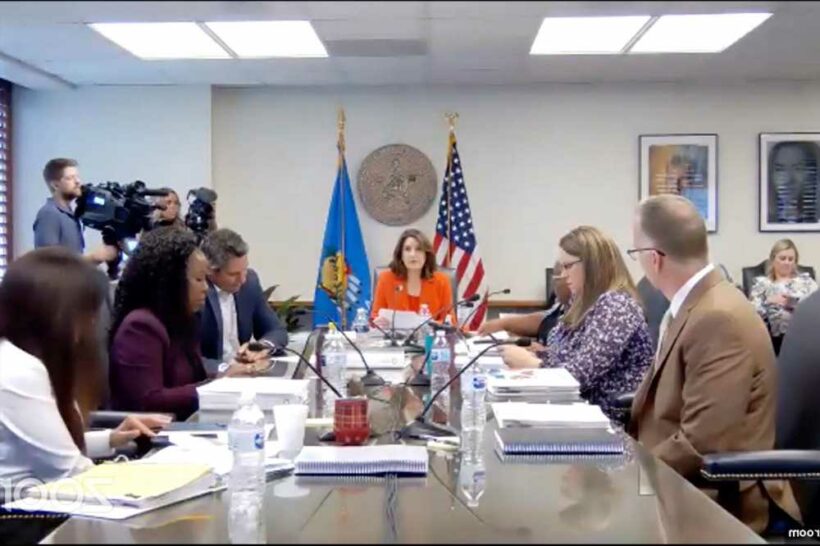 The 5-1 vote brings the board in alignment with a new state law, signed by Republican Gov. Kevin Stitt in May, prohibiting the teaching of critical race theory, which has become a topic of furious debate around the country in recent months.

Democrats in the Legislature who opposed the bill argued it was a waste of time and addressed a non-existent problem. The bill sailed through both houses of the state legislature, where Republicans hold a supermajority.

The only education board member to oppose the changes was its only black member, Carlisha Bradley, who claimed the new rules were “robbing students of the opportunity to have a high-quality education, to think critically about the world around us and to build a more just society.”

However, several current and former teachers addressed the board and said they support the new rules.

Another board member, Estela Hernandez, emphasized that the changes don’t prevent educators from teaching subjects mandated in the state’s official curriculum, the Oklahoma Academic Standards.

“Just stick to those standards,” she said, according to The Oklahoman newspaper. “Just teach history the way that it is outlined there. Those standards are teaching the dark areas of American history, and it should be taught and it will make us uncomfortable.”

The new rules also authorize parents to inspect curriculum, instructional materials, class assignments and lesson plans to ensure compliance and set up a method for individuals to file complaints. Public schools are required to investigate complaints, and a teacher’s license can be suspended if they are found to have violated any provision of the rule.

Following the vote, Tulsa’s school district, the second-largest in the state, said it would not change its curriculum to bring it in line with either the new state law or the new rules.

“We are teaching our children an accurate — and at times painful, difficult, and uncomfortable — history about our shared human experience,” Tulsa Public Schools spokeswoman Emma Garrett-Nelson said in a statement obtained by the Tulsa World.

“We cannot and will not teach those histories and experiences that reflect only the dominant white culture, just as we cannot and will not provide an education that deprives children of a true and accurate understanding of the world in which they live,” Garrett-Nelson added. “As a public school district, we owe it to the communities we serve to teach the truth — our children and families need and deserve nothing less.”