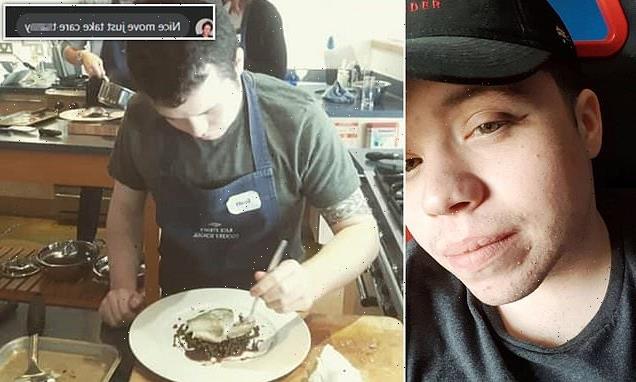 Police have investigated a pub landlady after she told a transgender chef to decide ‘if he’s Arthur or Martha’ in a Facebook row.

Scott Princep, 22, worked two trial shifts at Looe’s Harbour Moon Inn in Cornwall after responding to an advertisement for employees on social media.

Mr Princep, who was born male, came out as transgender to family and friends five months ago and will soon begin his transition.

But he was called ‘tranny’ on Facebook by pub landlady Karen Ridley after he was told he needed extra training to work as a chef.

Ms RIdley sent an initially polite message confirming what she could offer but indicated that Mr Princep was not ‘at the level he needed to be.’

Angered by Ms Ridley’s message, Mr Princep said he deserved more money and accused the current chef of being unhygienic after he allegedly served food that had fallen on the floor to a customer. 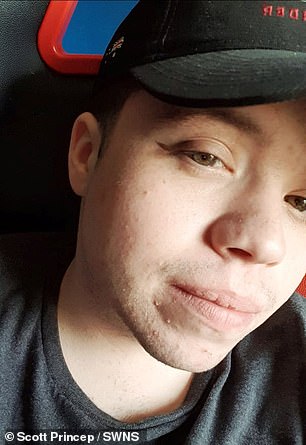 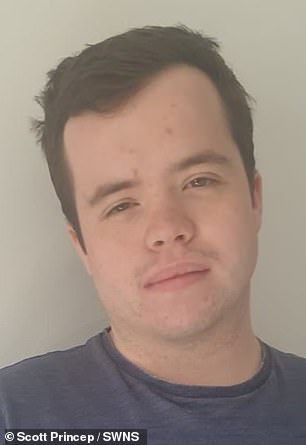 Scott Princep, 22, worked two trial shifts at Looe’s Harbour Moon Inn in Cornwall after responding to an advertisement for employees on social media

Ms Ridley replied with a series of messages. She told him he had his ‘knickers in a twist’, called him a ‘tranny’ and told him to decide ‘if he’s Arthur or Martha.’

The messages were reported to police, leading to an investigation that ended in police speaking to Ms Ridley to offer ‘words of advice’.

Mr Princep is now anxious to talk about his sexuality and tell others about his transition. He also fears being open about his personal life could hinder his chances of getting another job.

‘What she said is definitely transphobic,’ he said. ‘I’m still worried about getting a job now it’s out there that I’m trans. It’s worrying I could be denied a job – this whole thing is quite new for me. 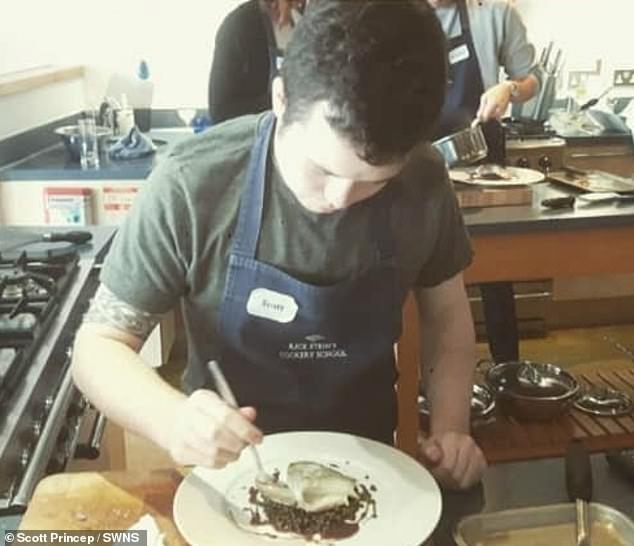 Mr Princep (pictured) said he has always been a chef and has been in kitchens since he was 14 years old. So he was angered when he was advised to step back and learn the job – or face the prospect of pot washing on a low wage

‘Some people think “oh no people like that aren’t going to be as productive as others” – it’s ridiculous. She’s an employer – she’s got power. If anyone else from my community that isn’t straight goes in there, who know what could happen.’

Mr Princep said he has always been a chef and has been in kitchens since he was 14 years old. So he was angered when he was advised to step back and learn the job – or face the prospect of pot washing on a low wage.

In the message exchange, Mr Princep told Ms Ridley that he had ‘more experience than any of you in there after trawling to 30 different countries learning their cuisines and cooking out there.’

He then accused an existing member of staff of alleged poor hygiene practices. ‘I was a bit annoyed by that – working as a pot washer on pretty much minimum wage,’ Mr Princep said.

‘I know it wasn’t a nice way to put it, but I was pretty riled up. I wasn’t expecting quite that response though.’ 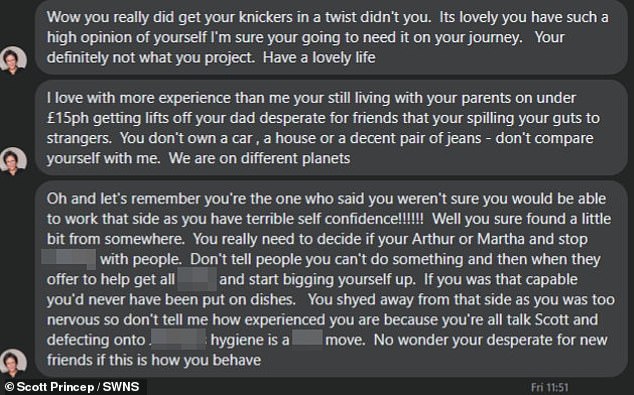 Ms Ridley soon replied to Mr Princep with what many would call transphobic remarks. She said: ‘Wow you really did get your knickers in a twist didn’t you.’

‘I love with more experience than me you’re still living with your parents on under £15ph, getting lifts off your dad and desperate for friends that you’re spilling your guts to strangers.

‘You don’t own a car, a house, or a decent pair of jeans – don’t compare yourself with me. We are on different planets.’

Another message read: ‘Oh and let’s remember you’re the one who said you weren’t sure you would be able to work that side as you have terrible self confidence!

‘Well you sure found a little bit from somewhere. You really need to decide if you’re Arthur or Martha and stop f**ing with people.’

‘If you was that capable you’d never have been put on dishes. You shied away from that side as you was too nervous so don’t tell me how experienced you are because you’re all talk Scott and deflecting onto [chef’s] hygiene is a d**k move. 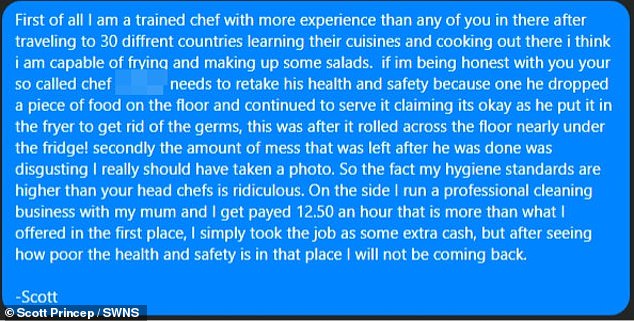 In the message exchange (pictured), Mr Princep told Ms Ridley that he had ‘more experience than any of you in there after trawling to 30 different countries learning their cuisines and cooking out there’

‘No wonder you’re desperate for new friends if this is how you behave.’

The final messages called Mr Princep ‘desperate,’ and signed off with ‘nice move just take care tranny.’ He said: ‘For someone who owns a pub – you think they’d come back with a more responsible reply – rather than that.

‘I was pretty taken back at first, I had to double check it was the same person. Nothing really phases me – I’ve never been exactly straight. It doesn’t bother me.

‘But this is the first time someone has directly messaged me calling me those words.’

Mr Princep thinks Ms Ridley was ‘given a slap on the wrist’ after he was told there was not enough evidence to prosecute.

He said: ‘I went to the police pretty much as soon as she sent “take care tranny”. I felt it had gone too far. If nothing is done then she’ll think she’s getting away with it.

‘The reason why I wanted to tell the story is because I know there are people out there that struggle to speak up for themselves.

‘If I can reach out to someone to say there is someone who has their back in the trans community then great.’ 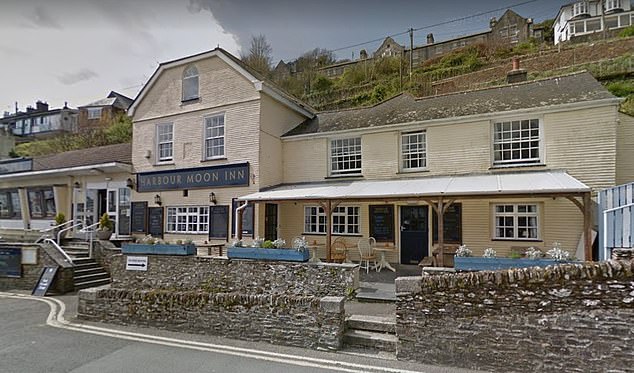 Mr Princep thinks Ms Ridley was ‘given a slap on the wrist’ after he was told there was not enough evidence to prosecute. Pictured, the Harbour Moon Inn

She said: ‘He has misinterpreted messages I have sent to him in the wrong way.

‘The “Arthur or Martha” thing is just a London saying and is nothing to do with his sexuality. I welcome all minority groups and I actively encourage people to do them. You do you.’

‘It’s a disgruntled ex-employee that was with us for two shifts and I wouldn’t even count him as an employee. I’ve never paid him a penny.’

A spokesperson for Devon and Cornwall Police confirmed that the incident was dealt with.

They said: ‘Police investigated a report from the Looe area of Cornwall of a hate crime relating to an abusive message sent over social media on Sunday 27 June.

‘Officers subsequently spoke with a local woman and words of advice were given.

‘The outcome was agreed with and supported by the victim as the best course of action.’