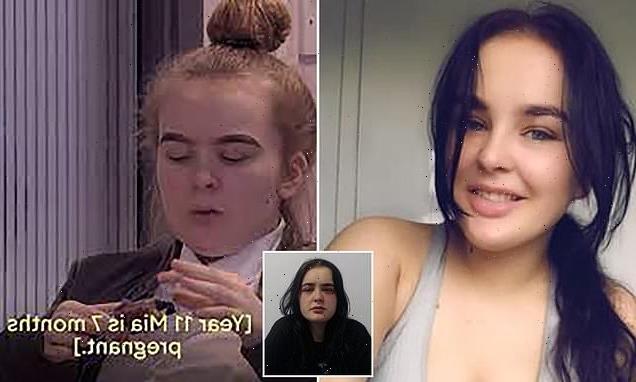 Pregnant mother, 20, who shot to fame on Channel 4 show Educating Greater Manchester is jailed for five years after hiding gun and ammunition for her criminal boyfriend 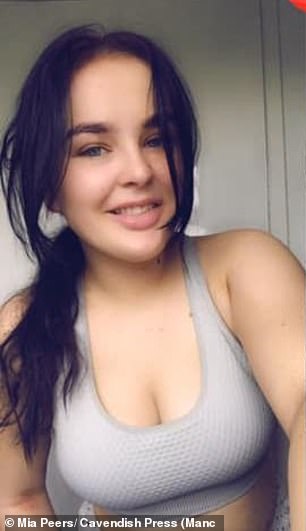 Mia Peers (pictured), 20, has been jailed for five years for hiding a gun for her boyfriend

A young mother who starred in the Channel 4 show Educating Greater Manchester has been jailed for five years for hiding a gun and ammunition for her boyfriend.

Mia Peers, 20, was arrested after confessing to her mother that she had been given the self loading pistol and five 9mm bullets when she was held at knifepoint by gangsters looking for the weapon last year.

Officers arrived at Peers’ home in Little Hulton, Salford, on November 28 to find the teen, who was 19 at the time, sobbing in her kitchen before she showed them the stash inside a drawstring bag under the stairs.

The youngster had shot to fame in the 2017 fly on the wall documentary after discovering she was pregnant aged 15 whilst sitting her GCSEs. She later had a daughter.

Now 20, Peers is currently pregnant with her second child and will be detained in a mother and a baby unit at Styal women’s prison in Cheshire after she gives birth later this year. Her first born little girl, aged four, is now living with her grandmother.

The police investigation began after Peers was handed the drawstring bag by her unnamed partner who told her to hide it and ‘not ask any questions’ and ‘not let anyone go near it.’

Manchester Crown Court heard she was suspicious but did not realise the bag contained a firearm until a week later when she was a friend’s house with two other children and armed masked men burst into the property.

They held knives to the throat of Peers and demanded they hand over the gun fleeing empty handed when they realised they had targeted the wrong house. Detectives later interviewed her over the attack but she failed to tell them about the package and when she returned home she looked inside the drawstring bag and found the gun.

She told her mother who in turn told the police. Jane Dagnall prosecuting said: ‘She told the officers exactly where the bag was and she told the police how it came to be under the stairs and told them she was too scared to tell them about it initially.’

Tests revealed the serial number of the pistol had been erased and it had been adapted to fire semi and automatic rounds. 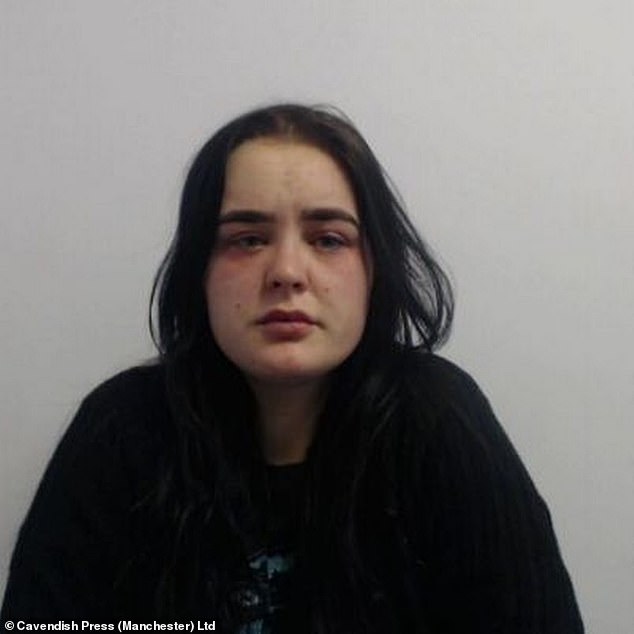 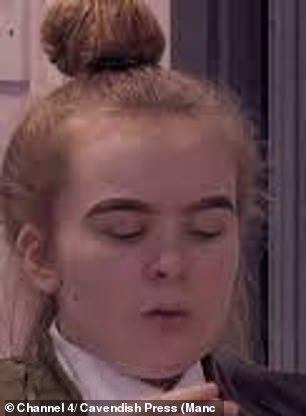 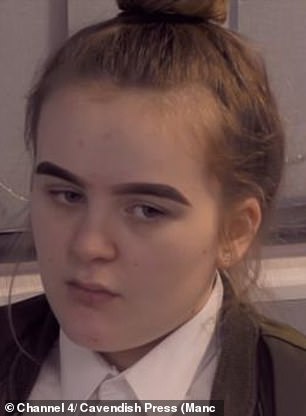 Peers as a school student on the Channel 4 show Educating Greater Manchester, which aired back in 2017

Peers pleaded guilty to possession of a prohibited weapon and possession of ammunition and was given a mandatory minimum of five years jail under UK gun laws. She had changed address several times since the incident, living with friends, for her own safety.

Her lawyer Jacob Dyer said: ‘She was in shock following the attack and then told her mum about the weapon.

‘Clearly she was in fear of the consequences for her. She was extremely vulnerable to exploitation and there was some sort of infatuation with her partner.

‘These are exceptional circumstances. A custodial sentence would be a tragic outcome for her.’

But Judge Timothy Smith said: ‘The intention of Parliament is to deter gun culture and deter the use of guns and gun violence in areas where there is gun culture and where it is prevalent.

‘This is prevalent in areas of Manchester where there is organised crime and when these guns are on the street they are used to kill and inflict injuries of the utmost severity.

‘They are used to impose terror on others and to enforce criminal activity.

‘Those who engage in these acts need a safe place to store their weapons.

‘Those who are looking for refuge for these guns look for people exactly like you – and that is just the reason why there has to be a deterrent. 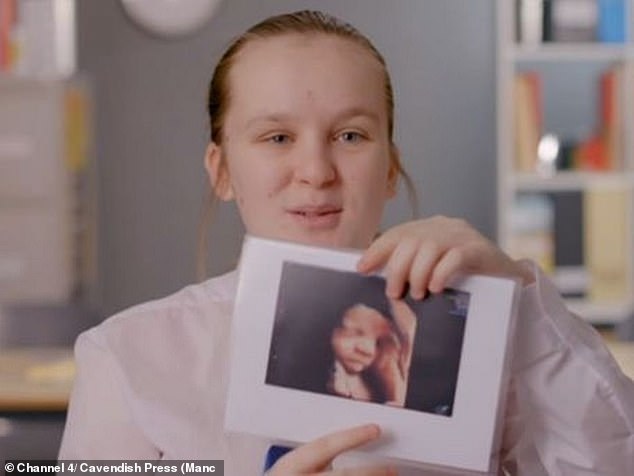 Peers back in 2017, showing viewers of Educating Greater Manchester an ultrasound image of her baby girl 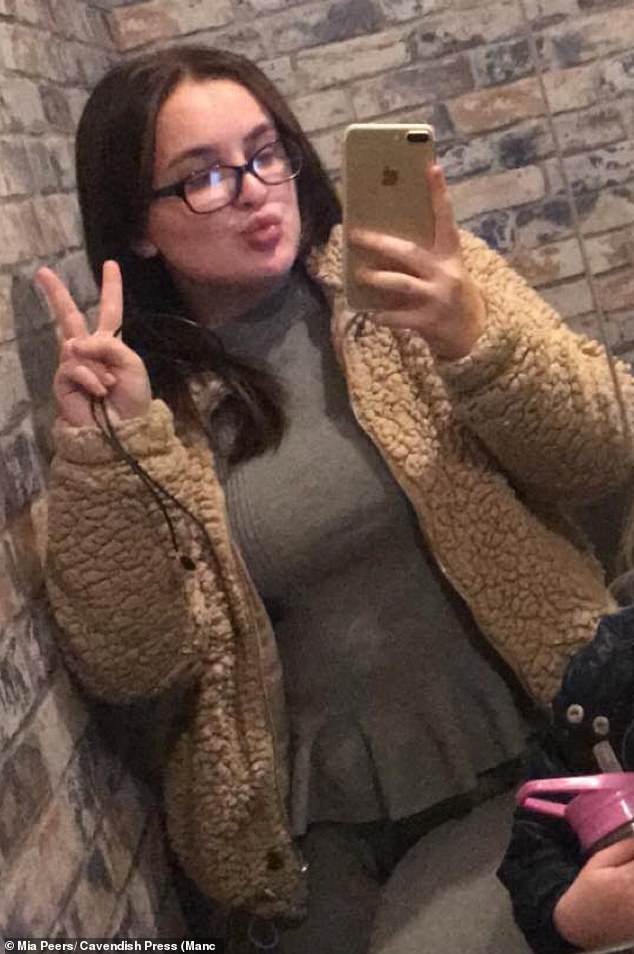 ‘It’s harsh for somebody in your position, but that’s the consequence of a deterrent sentence and is not something that is arbitrary or disproportionate.

‘This is one of those sentencing exercises that troubles the court because of your particular circumstances.

‘You are young, you have no previous convictions but the person who brought the gun was somebody you were aware had a reputation of some type but you didn’t ask any questions.’

At the time Peers appeared on the programme with baby scan pictures was was seen telling teachers she did not want to sit one of her exams due to the pain of being pregnant.

She later gave birth, sat all her exams and subsequently studied hairdressing at Salford City College.

At the time her mother Nicola said: ‘Whatever Mia decided we were always going to support her decision about the baby.

‘But I always wanted her to go to school and do her exams.’

‘I have said from day one that everyone will pass judgement but you have to show people yes, you were 15 and got pregnant.

‘But you carried on with school, did your exams and did the best you could. She wasn’t the first and she definitely won’t be the last. She is a fantastic mum.’