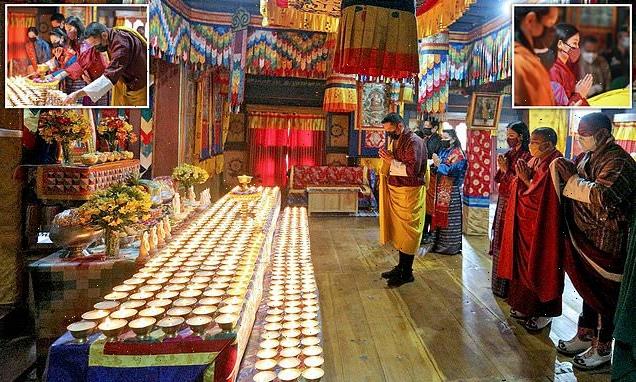 Prince Philip’s light shines on: King and Queen of Bhutan light 1,000 lamps and pray in memory of the Duke of Edinburgh

Bhutan’s royal family has lit 1,000 candles and offered prayers in memory of Prince Philip following his death last week at the age of 99.

Meanwhile the country’s crown prince, government ministers, and British citizens lit another 1,000 candles and offered prayers to the Duke of Edinburgh at a similar fortress on the outskirts of capital Thimphu.

King Jigme added that monasteries across the country had been ordered to offer special prayers for Philip, and that he had conveyed his personal condolences to the Queen.

‘The people of Bhutan join the people of the United Kingdom in mourning the passing of His Royal Highness, whose lifetime of steadfast service to his country shall serve as an inspiration for us all,’ a statement posted on the royal Instagram account said. 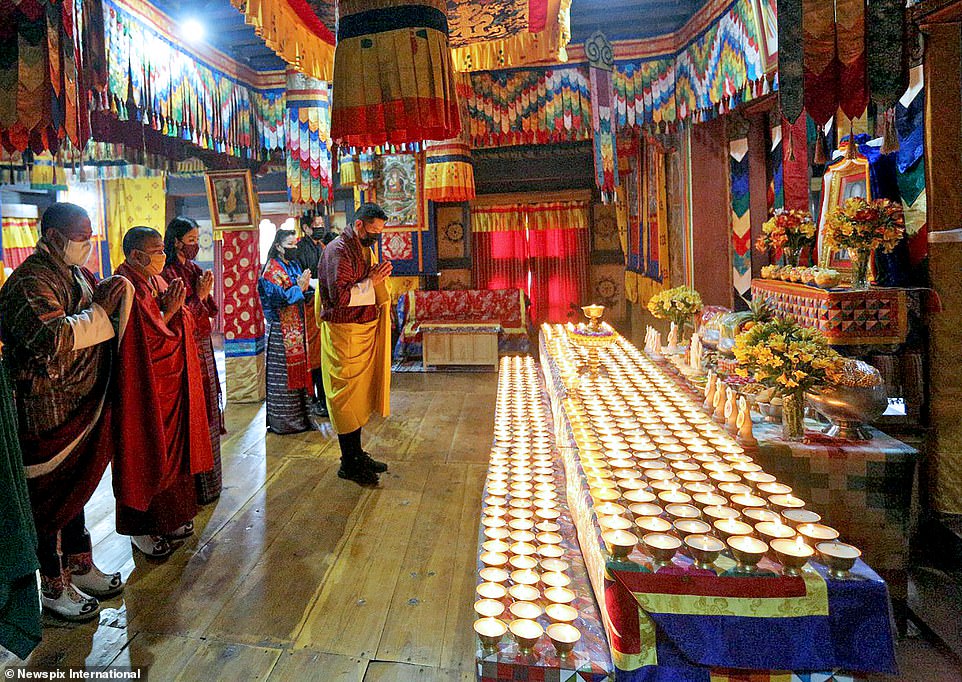 The king and queen of Bhutan have offered prayers for the soul of Prince Philip as they lit 1,000 candles – symbolising the path to enlightenment – at a Buddhist monastery in the east of the country in tribute to him 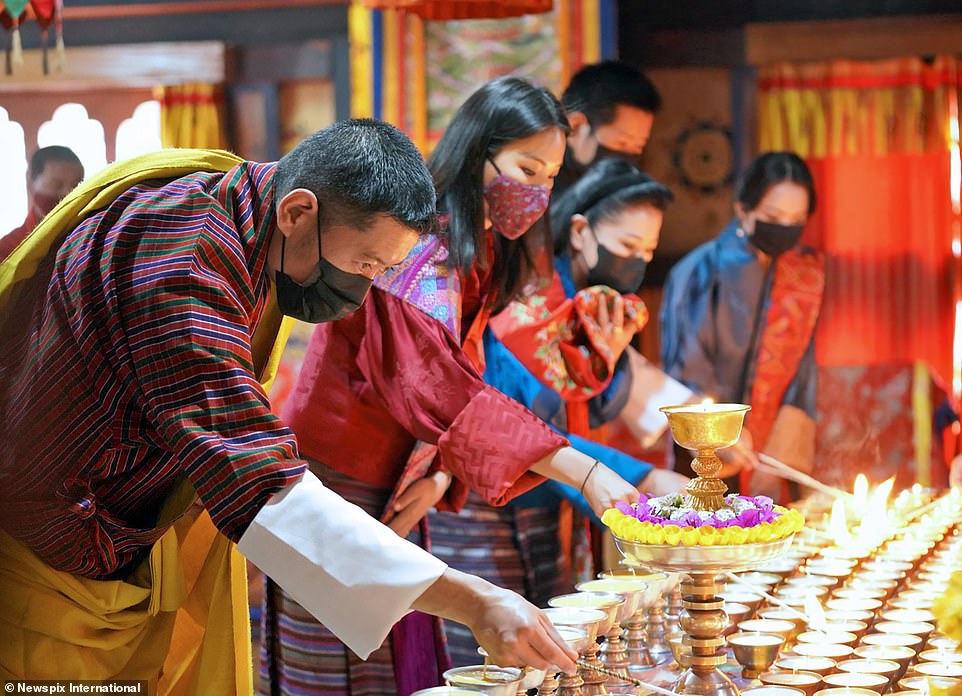 King Jigme Khesar Wangchuck (left) and Queen Jetsun Pema (to his right) offered their prayers at Mongar Dzong, a kind of fortress-monastery, in the country’s east on Sunday 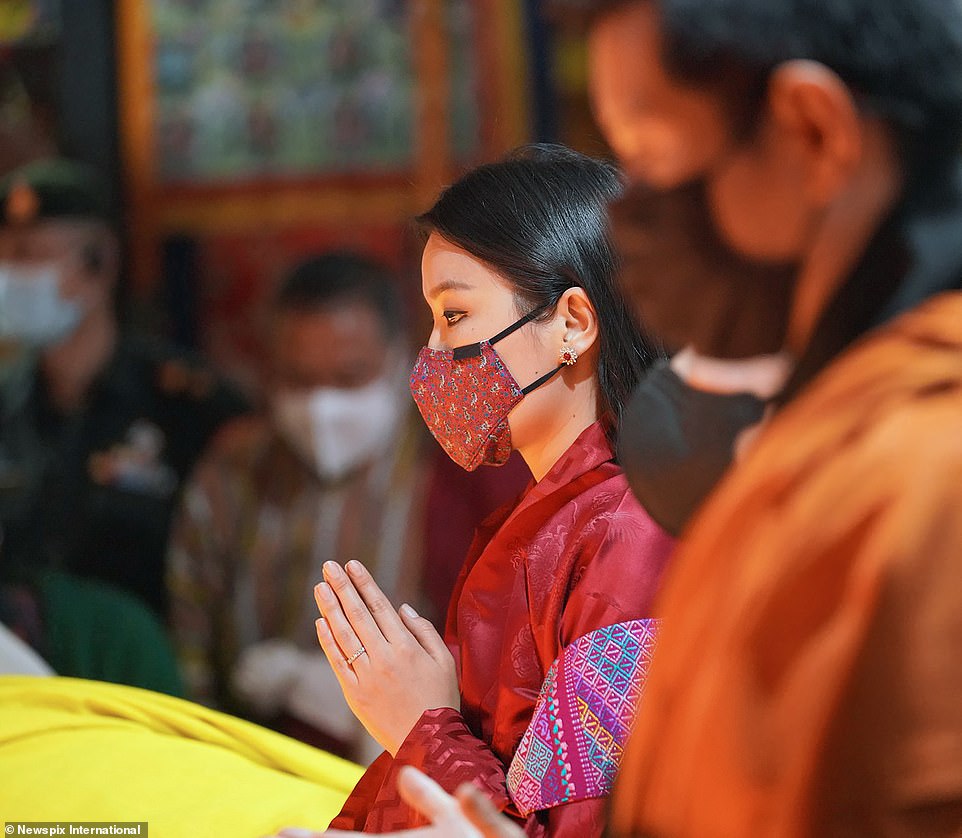 The Bhutanese royal family also paid tribute to Philip on Instagram, saying his ‘lifetime of steadfast service to his country shall serve as an inspiration for us all’ (pictured, Queen Pema prays at the monastery)

Bhutan’s royal family shares ‘exceptionally warm relations’ with the UK, King Jigme said, which goes back to the time of King Ugyen Wangchuck – the first ruler of a reunified Bhutan.

The British had helped the Wangchuck family overcome their regional rivals and take control of Bhutan in the 1800s, when Indian territory which borders Bhutan to the south and west was part of the British Empire.

Having helped the Wangchucks best their pro-Tibet rivals, they repaid the British by helping them fight in Tibet, for which King Ugyen Wangchuck was awarded a knighthood.

The current king, Jigme, had not met personally with Prince Philip but did travel to the UK in 2011, when he met with Prince Charles and Camilla at Clarence House in London.

King Jigme said the candles used in Prince Philip’s memorial were butterlamps, which in Tibetan Buddhism symbolise the hope that people are free of suffering and that their souls will reach enlightenment.

Bhutan’s royals are far from the only ones paying unique tributes to Philip following his death, with the people of a remote Vanuatu island who worshiped him as a deity also offering their respects.

People from the Yakel village on the Vanuatu island of Tanna have for decades venerated Philip who they believe is the real-life embodiment of a figure – the son of a mountain spirit – mentioned in their folklore.

It is thought the movement was started some time in the late 1970s by Chief Jack Naiva, who has also since died, and is now continued by a village leader named only as Albi.

He said that prayers are being offered to Prince Philip in the belief that his soul is now seeking a new home having left its previous body.

‘The spirit of Prince Philip has left his body, but it lives on. It is too soon to say where it will reside,’ he told AFP.

Beneath a British flag flying at half mast, Albi joined elders Monday at Yaohnanen – another village that worships Philip – to debate how to mark the Duke’s death.

Chiefs spoke in turn during painstaking discussions on what the death means for their customary belief system, with a resolution likely to be days away.

The Yakel chiefs said they were sending a confidential message to the royal family following Philip’s passing.

Prince Philip’s body is currently laying at rest in the private chapel of Windsor Castle where it will remain until the day of his funeral – April 17.

The funeral itself will be a ceremonial rather than a state affair, and will take place at St George’s Chapel, also in the grounds of Windsor Castle.

Due to Covid restrictions, the number of guests will be limited to 30 with only close family and senior royals expected to attend. Boris Johnson has voluntarily given up his seat at the service to allow more family members to be there.