Rome: A border stone planted by Emperor Claudius almost 2000 years ago to mark the newly enlarged confines of ancient Rome has been uncovered in the Italian capital, the first discovery of the valuable historical markers in more than 100 years.

The travertine marble stone dates to 49AD, when Claudius expanded the official confines of the “pomerium”, the sacred part of the city in which only Roman gods could be worshipped and no weapons could be carried. 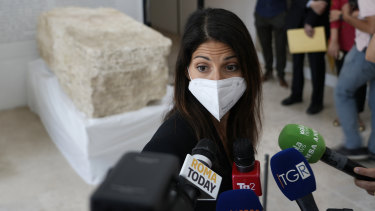 Rome’s Mayor Virginia Raggi, answers questions, during the presentation of the archeological finding at a Mausoleum in Rome.Credit:AP

“Expanding the pomerium was a symbolic move… but also served to welcome new citizens,” Claudio Parisi Presicce, the head of Rome’s archaeological museums, said in a press conference.

The Senate bitterly resented the decision, he added, as they did not want to let in more “foreigners”.

The pomerium marked the boundary between the historic city of Rome and conquered territory. It expanded over the centuries, but historians are still unsure about its perimeter at the time of Claudius, who oversaw the successful colonising of Britain, North Africa and parts of the Middle East.

The latest discovery could help dispel some of the mystery. “It’s like an extra piece of the jigsaw for the understanding of ancient Roman society,” said Parisi Presicce. 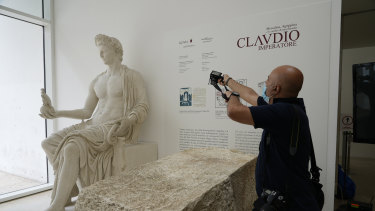 A statue of Emperor Claudius.Credit:AP

The border stone was found half buried during excavation work one-and-a-half months ago for the redevelopment of a piazza by the Mausoleum of Augustus, some 3.5 metres below street level.

After experts inspected it, it was dug out and temporarily moved to the nearby Ara Pacis museum, where it was put on display next to a copy of a statue of Claudius.

The stone originally had a nine-line inscription, but only a few parts have survived. They introduce Claudius, list his titles and honours, and “announce to posterity” his decision to expand the pomerium’s borders, according to Parisi Presicce. 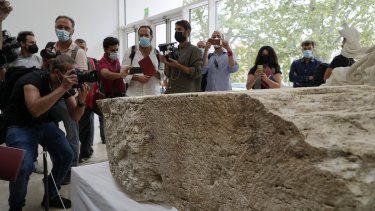 The monumental pomerial stone is dating back to Roman Emperor Claudio and was used to mark the ‘pomerium’ the sacred boundaries of the ‘Urbe’, the city of Rome, during the Roman empire. Credit:AP

The emperor is thought to have laid down more than 140 border stones around Rome but only 11 of them survived – including this latest discovery.

Some are held by the Vatican Museums and four have been left in their original location.

The new stone will be displayed inside the Mausoleum of Augustus, which reopened in March after a £10 million restoration.