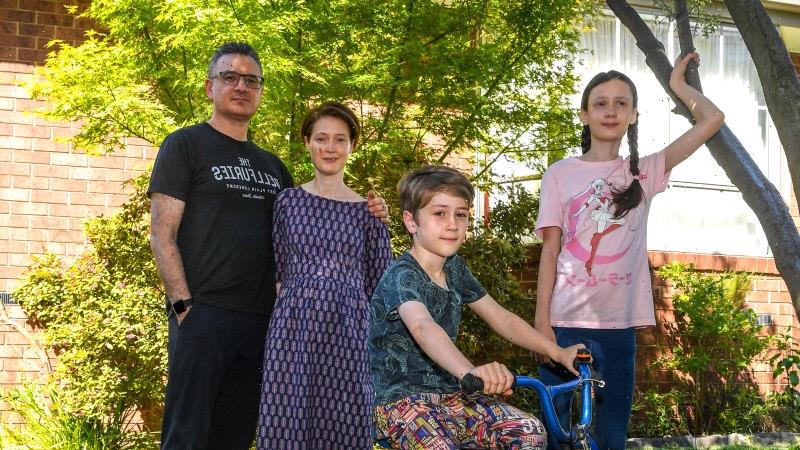 Melbourne dermatologist Sarah Brennand isn’t too concerned about her two children catching COVID-19 when they go back to school: both have just had it. 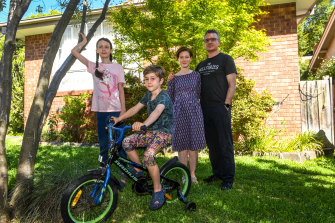 Melbourne couple Sarah Brennand and Rob Citroni, with their children Katia, 11, and Reuben, 8, are torn about the return to school.Credit:Justin McManus

Their experiences with the virus varied. Eleven-year-old Katia had mild symptoms – just a headache and sore throat – but her younger brother Reuben, 8, suffered more.

He had a high fever, was vomiting and couldn’t keep fluids down, Dr Brennand said.

At his sickest, she worried that Reuben might have to go to hospital to be put on an intravenous drip, something she was anxious to avoid, knowing that Omicron has pushed the state’s healthcare system to the brink.

“We were all sick with it as well and it wouldn’t have been a great time. He was bad for about 36 hours, and then he started to pull through,” she said.

Both children are well again and have recently received their first dose of Pfizer vaccine. Dr Brennand and her husband, Rob Citroni, dearly want to see them start the school year in a classroom.

Both children had poor experiences with remote learning. Reuben struggled to concentrate and would often refuse to complete his work, while Katia became so anxious that she eventually returned to school for on-site supervision.

“Even though the teachers were wonderful, they were amazing, there is just no replacement for that on-site learning and the social skills that they are missing out on developing.”

Yet, the couple are torn, knowing that many of their children’s classmates won’t have had a jab by January 31, the first day of school, and will be at greater risk of infection.

Dr Citroni – an intensive care specialist – has no faith in politicians’ assurances that our days of remote learning are done.

“There is no substitute for face-to-face learning, but it’s going to spread like wildfire as soon as they get back, so I anticipate there will be further lockdowns and home-schooling,” he said.

The Andrews government has been adamant that remote learning is not in the plan for term one, whatever disruption the rampant Omicron variant creates.

Education Minister James Merlino said this week that Victoria – the state where students missed as many as 170 days of face-to-face learning, more than any other – supports national cabinet principles that schools will be “the first to open and the last to close” in 2022.

“The days of system-wide remote learning in line with lockdowns – no one is talking about that,” he said this week. “We want our students back in classrooms, face-to-face with their teachers, with their peers.” 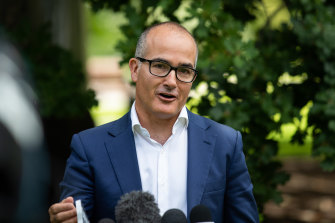 Victorian Education Minister James Merlino says remote learning is not on the cards for term one. Credit:Jason South

The end of remote learning in Victoria was celebrated as all students returned to classrooms in mid-October last year, but the return to face-to-face learning also ushered in a new period of chaos in term four.

Six per cent of schools were forced to shut temporarily to manage COVID-19 outbreaks as case numbers surged into thousands a day, particularly among unvaccinated primary school students.

Many more stayed open, but with entire classrooms or even year levels in isolation, leading them to adopt a clunky “hybrid” model of in-class and remote learning.

Victoria also experienced a statewide shortage of casual relief teachers in term four, as cases of the Delta variant rose in the community, putting thousands of staff out of action.

Ironically, the Andrews government’s tutor learning initiative has also drained the state of its usual pool of relief teachers, with several thousand hired to help students catch up on lost literacy and numeracy.

As school leaders warn of a potential teacher shortage in term one, they are also managing a workforce that feels vulnerable and in many cases resentful of the expectation they will head back into classrooms.

Robert Kelly, a STEM teacher and learning specialist at a government school in Melbourne, said teachers were “being used as COVID fodder” in the drive to ensure that schools stay open.

About 30 students and several teachers at his school contracted the virus in term four last year, forcing the school to scrape by with a skeleton staff.

“It was exhausting,” he said. He fears term one will be worse.

“We all have great respect and admiration for our health care professionals, but at least they have PPE gear and the training to understand what they’re dealing with,” Mr Kelly said.

“As for teachers, they have masks and that’s it. That’s their defence against COVID in a classroom of 25-plus students.”

Despite the reservations of many working teachers, the Andrews government is betting on enticing inactive and retired teachers and school support staff back into the classroom to fill the gaps when active staff must isolate.

Another part of its plan will involve a surveillance testing program, with students taking rapid antigen tests at home.

Paediatrician Fiona Russell said it was essential that unwell children did not attend if the new strategy is to work.

“It’s absolutely critical that anyone with symptoms shouldn’t be coming and [should] assume they’ve got COVID,” she said.

“If the rapid antigen testing [kits] aren’t available on the first day of school, then it really has to be a symptom-based thing.”

She said schools had been an “after-thought” during the pandemic and any call to delay the start of term one was unfair to children whose past two years had been so disrupted.

“Vaccines are one part of it, testing is another bit, ventilation, all those other things, workforce planning – it all needs to be resolved,” she said.

“These are all mitigation measures. It is going to be bumpy. There will be lots of infections, there’s no doubt about that. We will not have zero-COVID schools, that’s for sure, and schools will contribute to community transmission. But so does every other place that has infections as well.”

Victoria’s acting chief health officer Ben Cowie recently said infections among primary school-aged children had fallen from more than 30 per cent in term 4 to less than 5 per cent during school holidays.

But she said a single dose was still highly protective for primary school-aged children and the chance of hospitalisation among that age group was extremely low, based on New York data.

Local data is also reassuring: of the more than 1700 people who have died with COVID-19 in Victoria, only one was aged under 10 and one other aged between 10 and 19, heath data shows.

Deakin University associate professor in epidemiology Hassan Vally said many of the initial fears epidemiologists, including himself, held about COVID-19 and children had not eventuated and that even though much is unknown about the Omicron variant, “no parent should feel frightened for their children going back to school, regardless of their vaccination status”.

“People are going to be exposed to the virus and develop symptoms, but the epidemiology is really clear, even with the Omicron variant, that children largely escape serious consequences,” Associate Professor Vally said.

It’s a sentiment Dana Supramaniam is pleased to hear as her children, Hari, 11 and Sakthi, 7, look ahead to another year at Glen Waverley Primary in Melbourne’s east, even if she will send them off “with a heavy heart”.

She knows her children will benefit from being at school and among friends. But she expects to see case numbers in schools rise again and can’t help but worry that her children could get sick, despite them having just received their first jabs.

Despite her “mixed feelings”, Ms Supramaniam is putting her trust in the advice of health experts. After two years of being cocooned at home, she knows her children are yearning to return to living a full life.

“I haven’t heard of anything really bad happening to children yet. I’m hoping for them to have a normal life, as much as possible because that’s probably what they want too.”