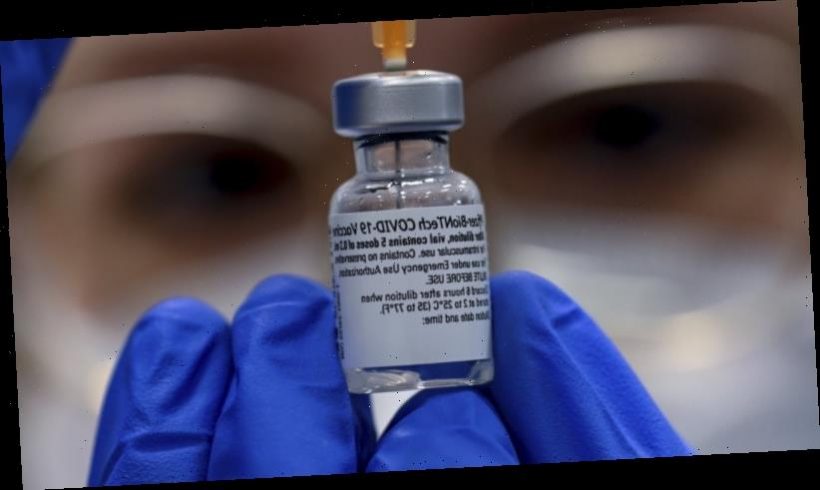 Manila: The message in late December wasn't meant for Jesse, a newcomer working at an offshore gambling operator in the Philippines. But her eyes fell on a group chat on her colleague's unattended phone, detailing plans to administer coronavirus vaccines this month to her Chinese co-workers.

Her colleague had sent their peers a reminder "to make sure when they get vaccinated, they have to wear long sleeves […] to cover the cotton after the injection," said Jesse, a Filipino who chose to go by her nickname for fear of reprisal. "And you're not supposed to say anything to other employees." 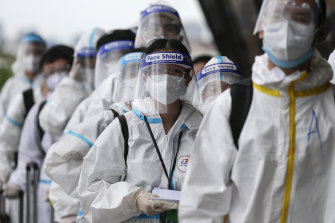 Passengers line up to fly to China from Manila’s international airport. Under-the-counter vaccines are being sold to foreign workers in the gaming industry. Credit:AP

No coronavirus vaccine has been approved for general use in the Philippines, nor is one expected to arrive, officially, until at least February. It is illegal to import unauthorised pharmaceuticals.

But soaring demand among Chinese workers, many of them employed in the Philippines' lucrative online casinos catering to gamblers in China, is driving a black market where vaccine doses are sold for many times the standard 190 yuan ($38) in China.

The underground distribution exposes pandemic inequalities and problems with immunisation drives in places plagued by corruption and patronage. In South-east Asia, where there are millions of overseas Chinese workers, it also threatens to heighten long-standing resentment between local communities and the Chinese population.

The bootleg vaccines aren't limited to Chinese workers. In late December, President Rodrigo Duterte said members of the Philippine military had already taken the coronavirus vaccine from Sinopharm, a Chinese state-owned pharmaceutical company. Members of the President's security group admitted they had received the shots, angering ordinary Filipinos who are grappling with one of the region's worst outbreaks. (Sinopharm's vaccine has been approved for general use in China, but not in the Philippines; the company did not respond to requests for comment.) 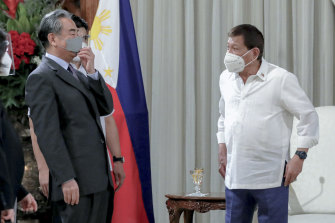 While no vaccine is authorised for general use yet in the Philippines, President Rodrigo Duterte, seen here on January 16 with China’s Foreign Minister Wang Yi, has already had a jab. Credit:Malacanang Presidential Photographers Division

"Time and again, health workers are being neglected," said Reigner Antiquera, president of the Alliance of Young Nurse Leaders and Advocates. "Nurses, doctors, and other health workers should be prioritised in receiving these vaccines because they are the most at risk and exposed to the virus."

It is unclear how unauthorised vaccines fell into the hands of those close to Duterte, whose centrepiece domestic policy has been a war on illegal drugs. Defence Secretary Delfin Lorenzana confirmed to local media that the doses were smuggled in but said this was "justified" because Duterte's security team had to keep the 75-year-old leader safe. Harry Roque, the presidential spokesman, said the vaccines were a donation, without identifying the source.

These developments raised even more questions about the scale of illegal vaccine distribution in the Philippines, and how those in positions of power were able to procure shots before front-line health workers.

The vaccine could fetch between $200 and $300 on the black market, presumably for both doses, she said.

Jesse said the contents of the gambling workers' chat group indicated that her Chinese colleagues would be administered the Pfizer vaccine, shipped in from China.

In an emailed statement on Tuesday, Pfizer did not address questions about whether it had shipped doses to the Philippines. Last Thursday, local regulators approved the Pfizer vaccine for emergency use.

As China rolls out its vaccines at home, Beijing has said it has also prioritised access for its nationals working overseas in critical fields such as military personnel, diplomats, construction and aircrews, along with some international students.

A Philippines-based businessman who spoke on the condition of anonymity, citing security reasons, said that he had been approached by Chinese businessmen from the online gambling industry about supplying the Sinopharm vaccine to their employees. The process, he said, entailed the buyer declaring the smuggled vaccines as supplements, before customs officials would relabel the shipment accordingly and approve the importation.

Would-be local distributors would have to agree to assume legal responsibility and sign a waiver committing not to resell the vaccine. A copy of a waiver form seen by The Washington Post did not contain identifying information about the company or companies involved.

A Philippine Bureau of Customs spokesman declined to comment, citing continuing inquiries by the country's Food and Drug Administration and National Bureau of Investigation.

The Chinese Embassy in Manila did not respond to requests for comment. In a memo dated October 31, it reminded its citizens "to stay alert against rumours and refrain from taking unauthorised vaccine shots so as to avoid being taken in by scams and endanger personal safety".

The Philippines, which has had one of the harshest and longest lockdowns, has surged past 500,000 infections in a new bleak milestone and almost 10,000 deaths.

Alarmed by the spectacle of senior figures taking unapproved vaccines, officials at the Philippines' Health Department and FDA held a news conference on December 29 in which they reiterated that it was illegal to import, distribute or promote unauthorised doses.

The government said on Monday that it had secured 25 million doses of Sinovac's coronavirus vaccine, and that an initial batch of 50,000 doses would arrive by next month. With Pfizer's vaccine approved for emergency use, deals are in the works with other vaccine makers, including AstraZeneca and Moderna, pending regulatory approval.

Risa Hontiveros, an opposition senator, urged Beijing to investigate the entry of unauthorised drugs into the Philippines. "Given China's strength in security and surveillance, it's impossible for them not to know who is behind these black-market vaccines," she said in a statement on Monday.