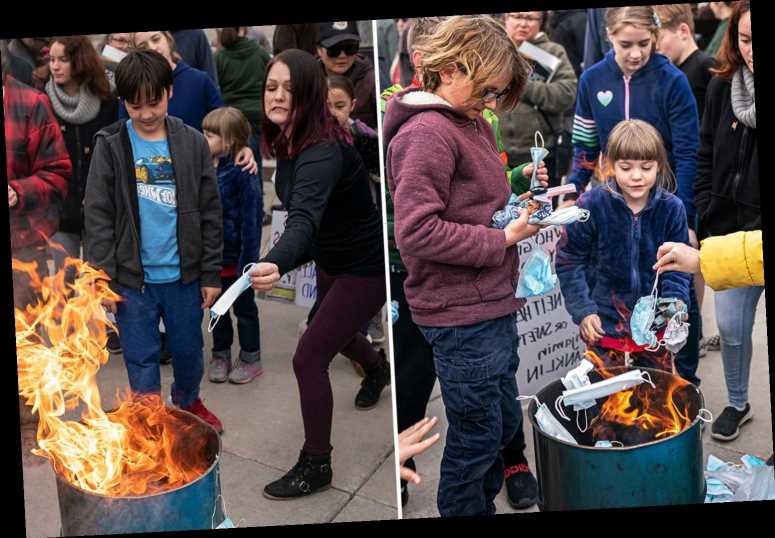 THIS is the shocking moment Idaho kids tossed Covid masks into burning trash cans at a #BurnTheMask rally.

Video footage of the mask-burning rally in Boise, Idaho, captured people of ages, including a handful of children, throwing their protective face-coverings into a fiery garbage can. 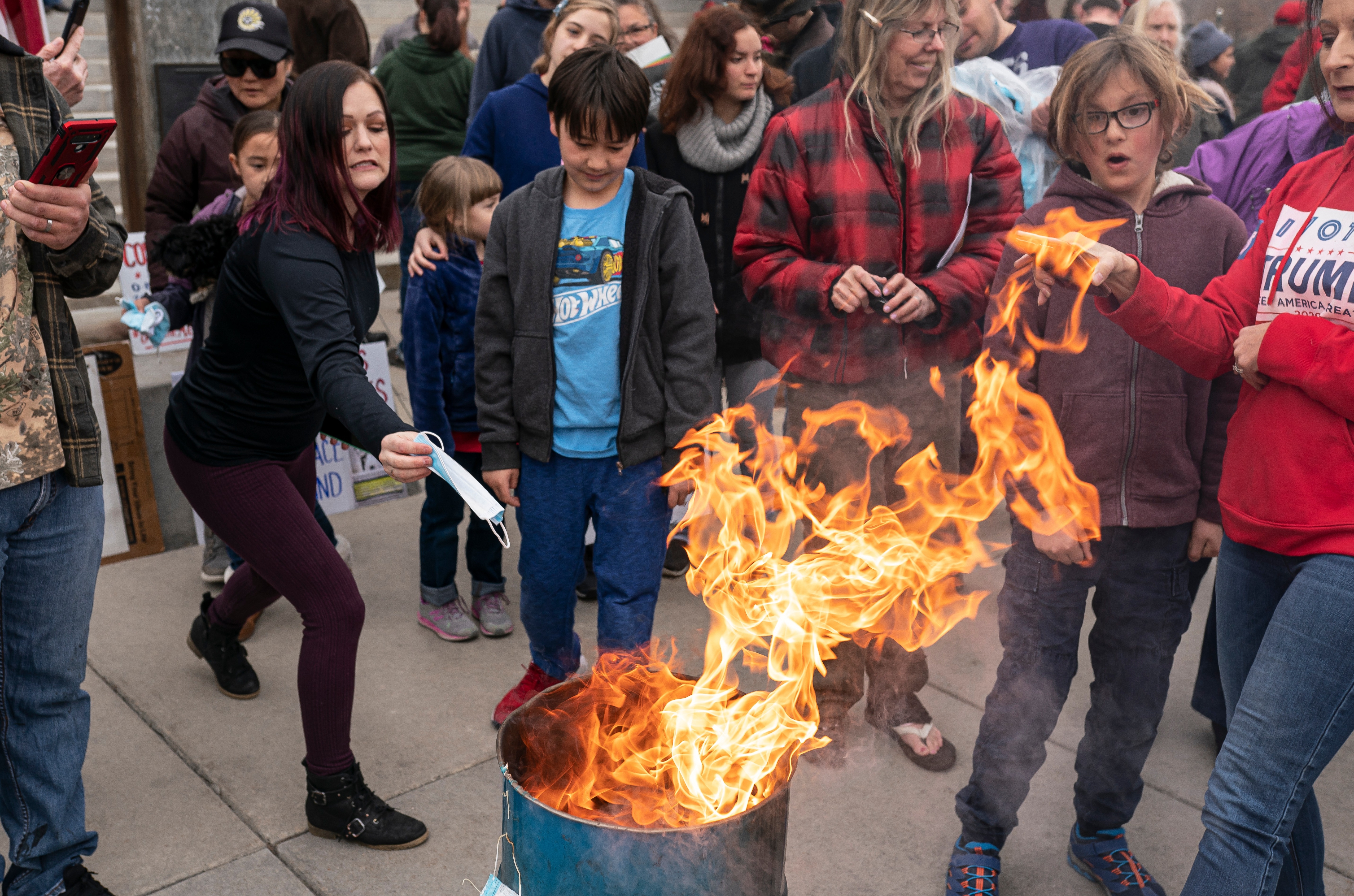 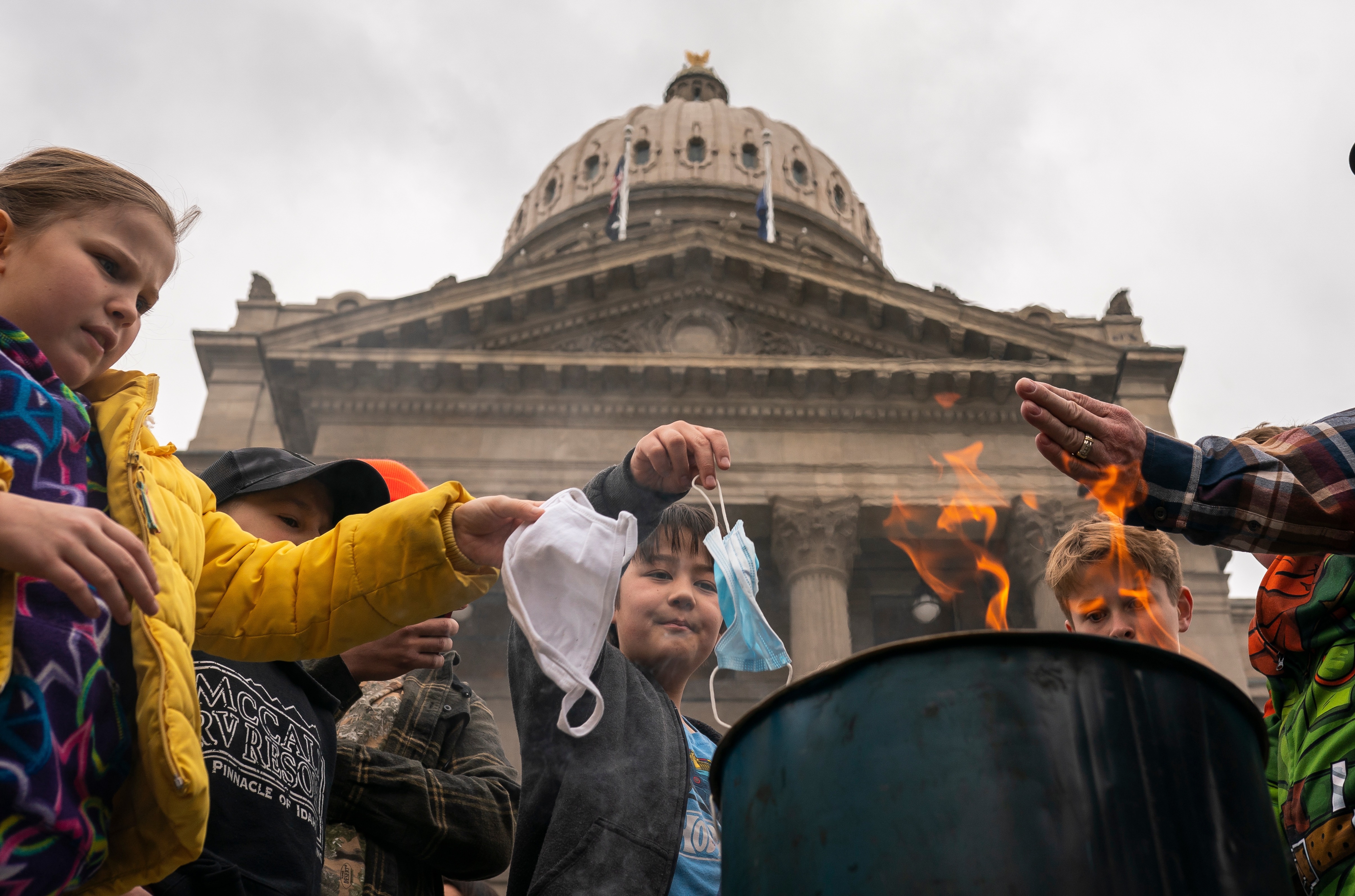 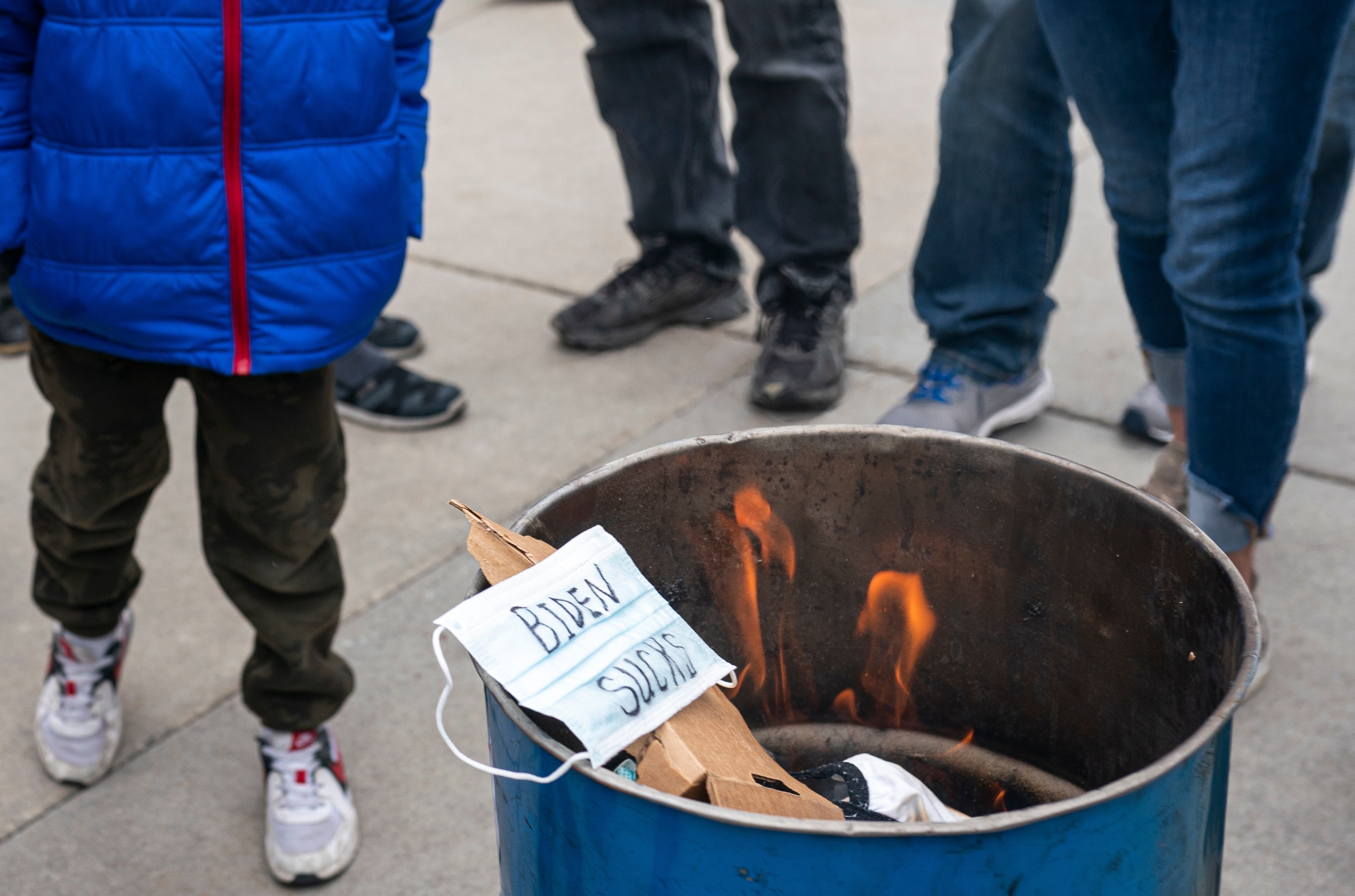 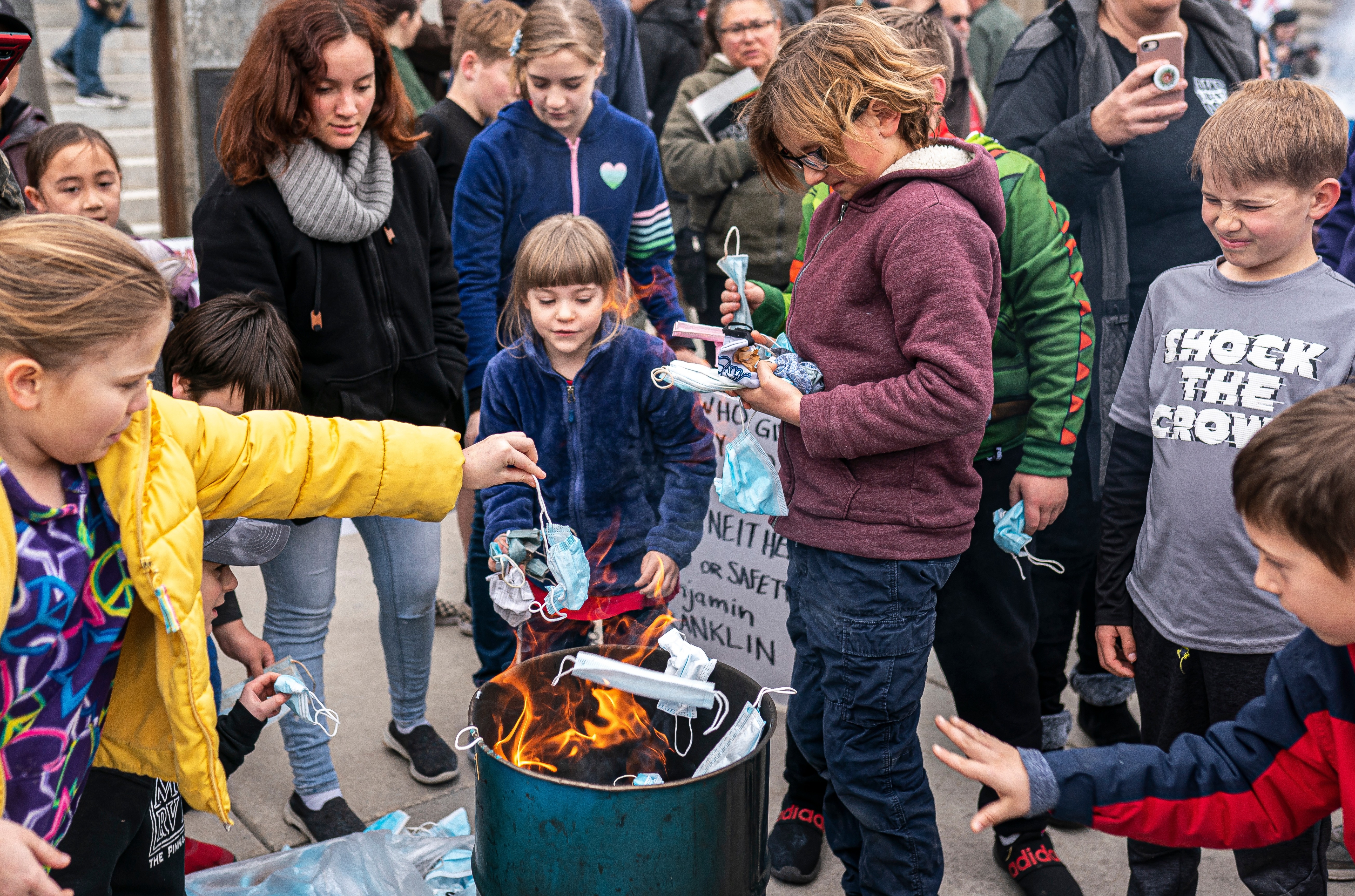 One kid, in the 14-second video – which was shared to Twitter and has since obtained more than 37,000 views -is heard saying: "Here fire, you hungry?

A poster board seen in the footage read: "No masks, no mandates. Our face, our mind."

Another sign had a Benjamin Franklin quote written on it: "Those who give up liberty to purchase safety deserve neither liberty or safety."

As the children took turns disposing of their surgical masks in the blazing fire, others stood by watching and recording the celebratory event on their cellphones.

Photographs from the mask-burning event showed the protesters burning a light blue surgical mask with the words "Biden Sucks" written in what appears to be black marker. 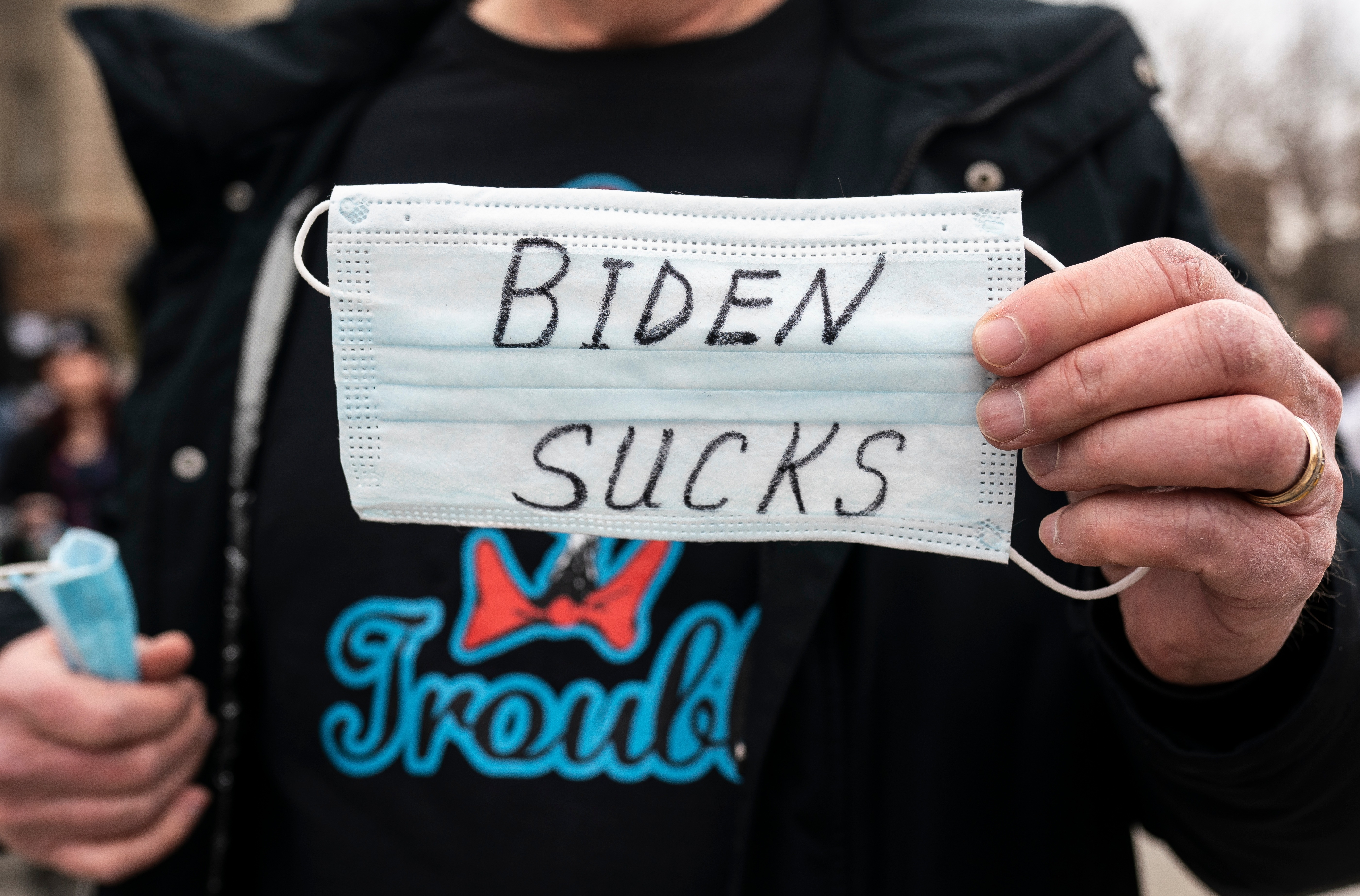 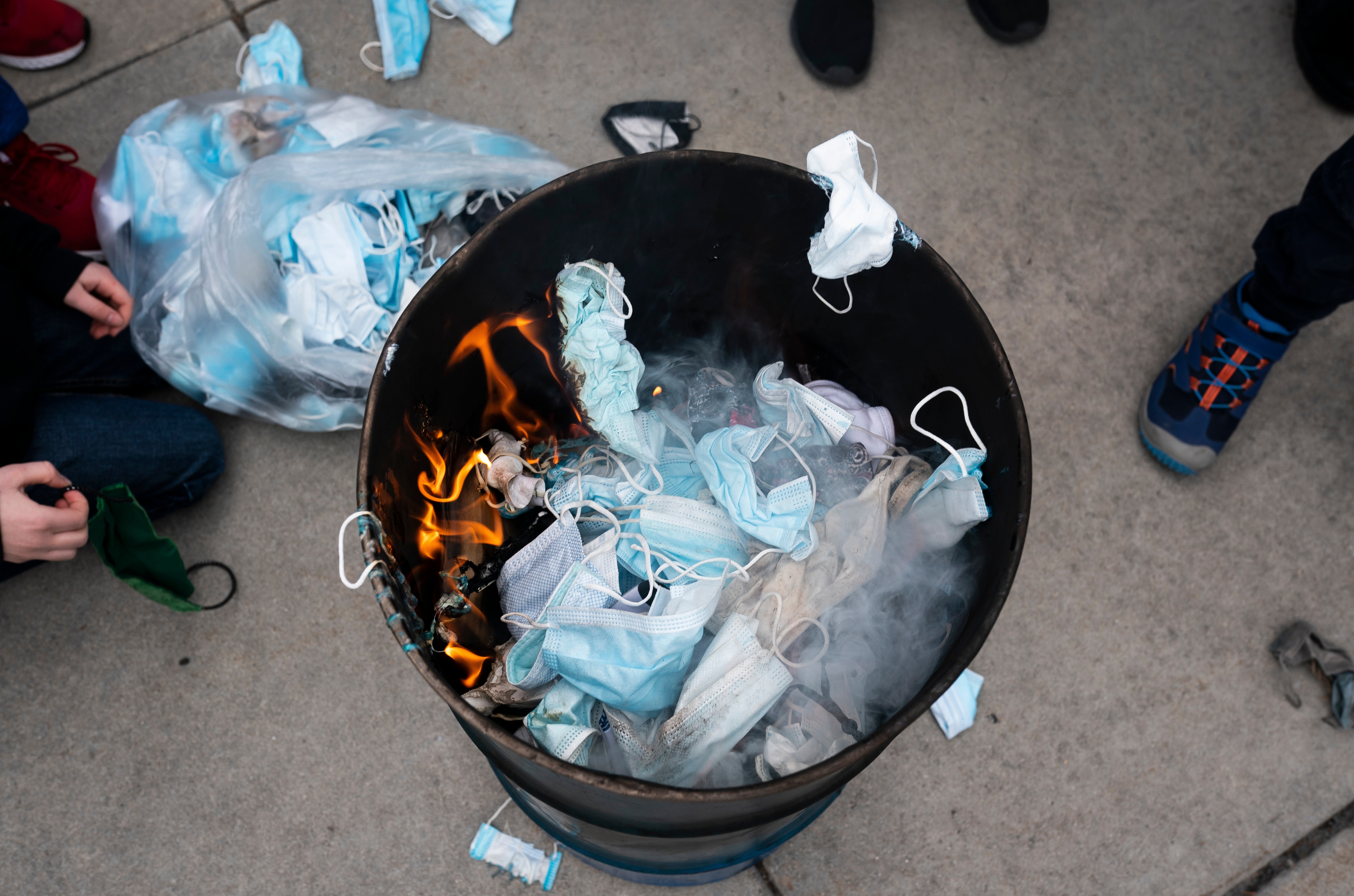 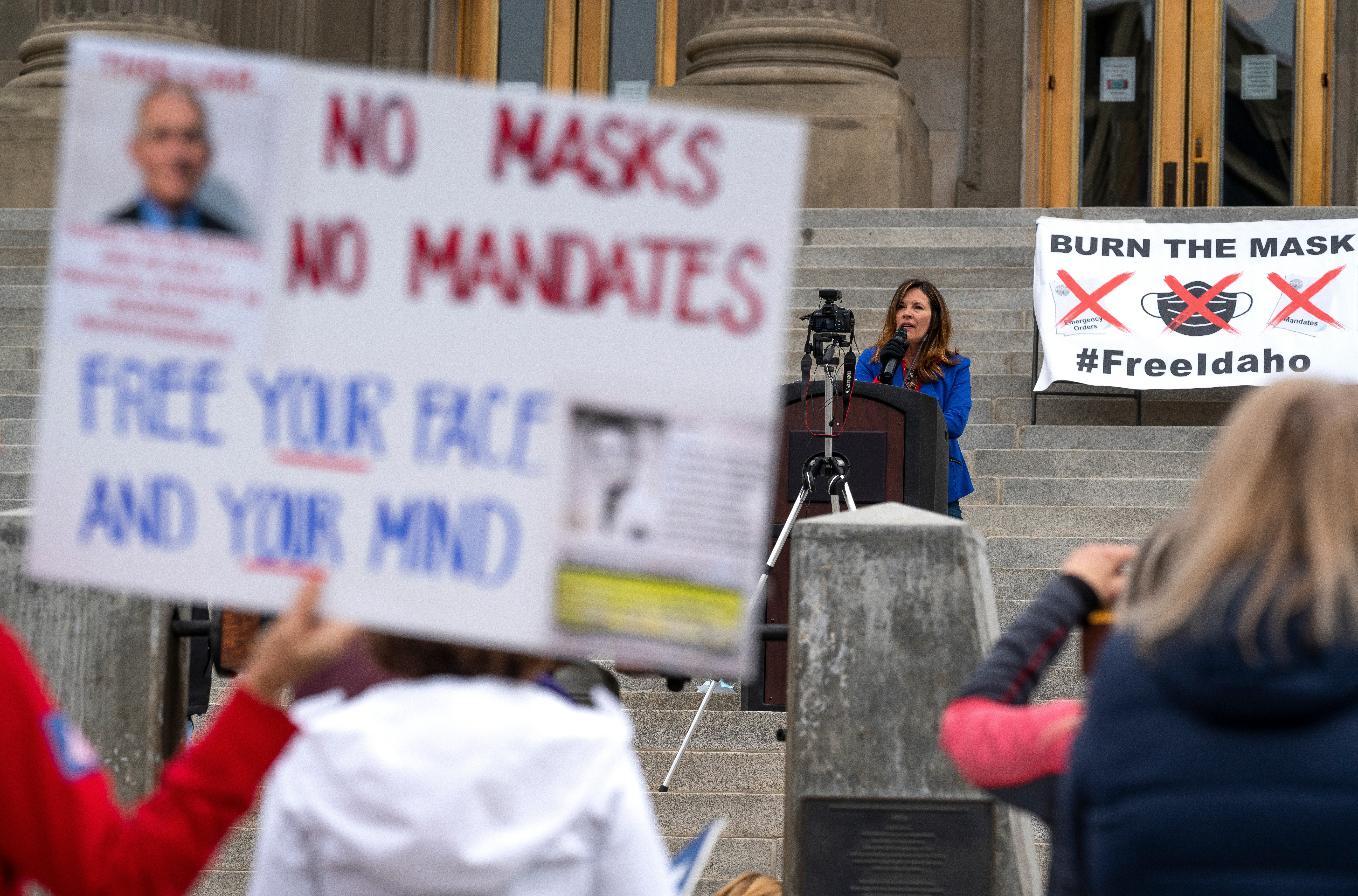 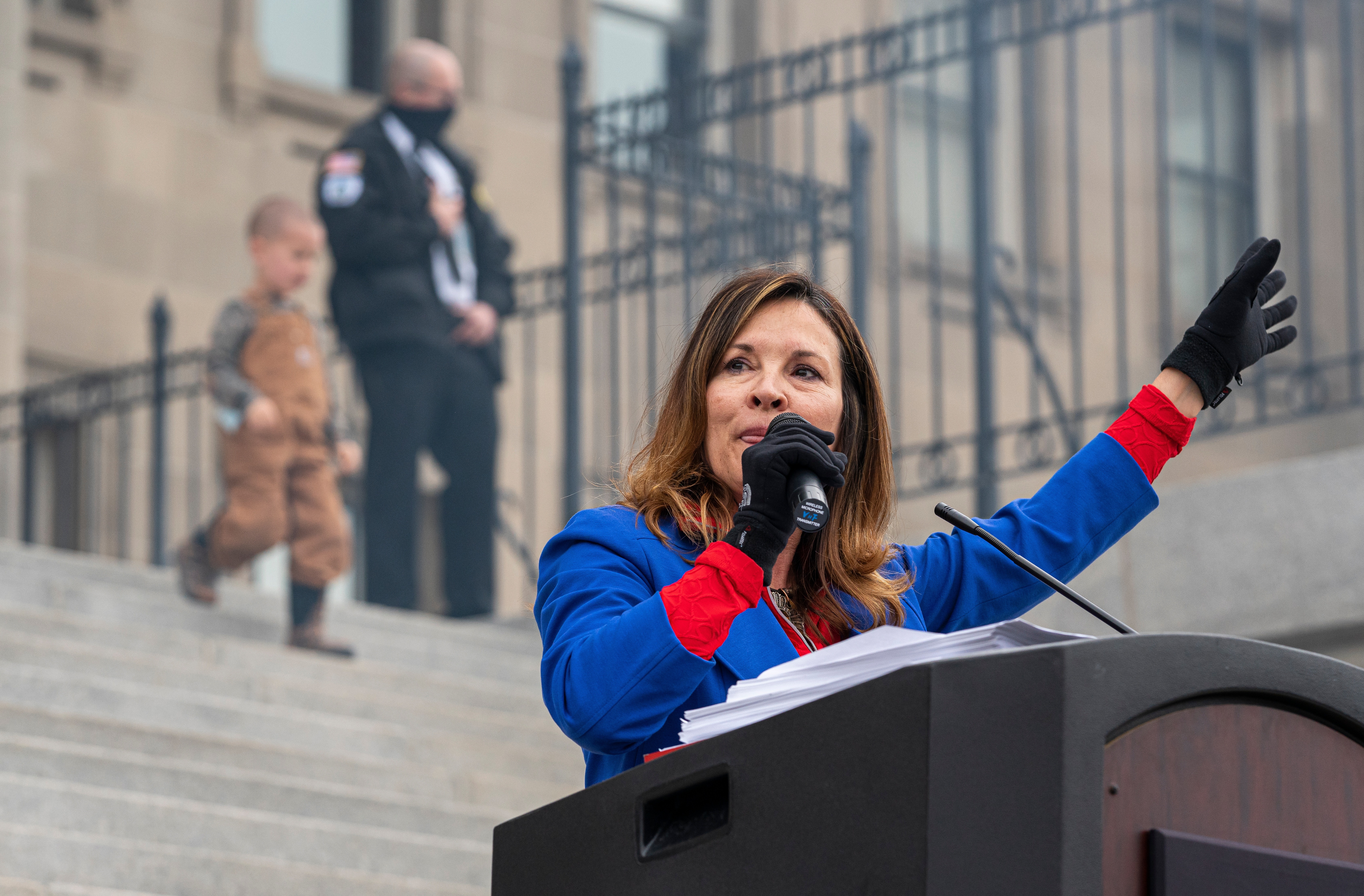 The mask-burning took place outside the Idaho Statehouse on Saturday, March 6.

Lieutenant Governor Janice McGeachin, politicians, and citizens of Idaho spent their Saturday protesting Covid restrictions across at least 20 cities in the state.

McGeachin spoke outside on the Statehouse's steps during the Saturday gathering.

Another video of the Boise gathering, which was also shared to Twitter and received more than 2.6million views, appeared to show parents cheering on the children as they threw dozens of masks into the fire.

At the start of the fire, an adult is heard saying "all at once" and seconds later others can be heard cheering the children on. 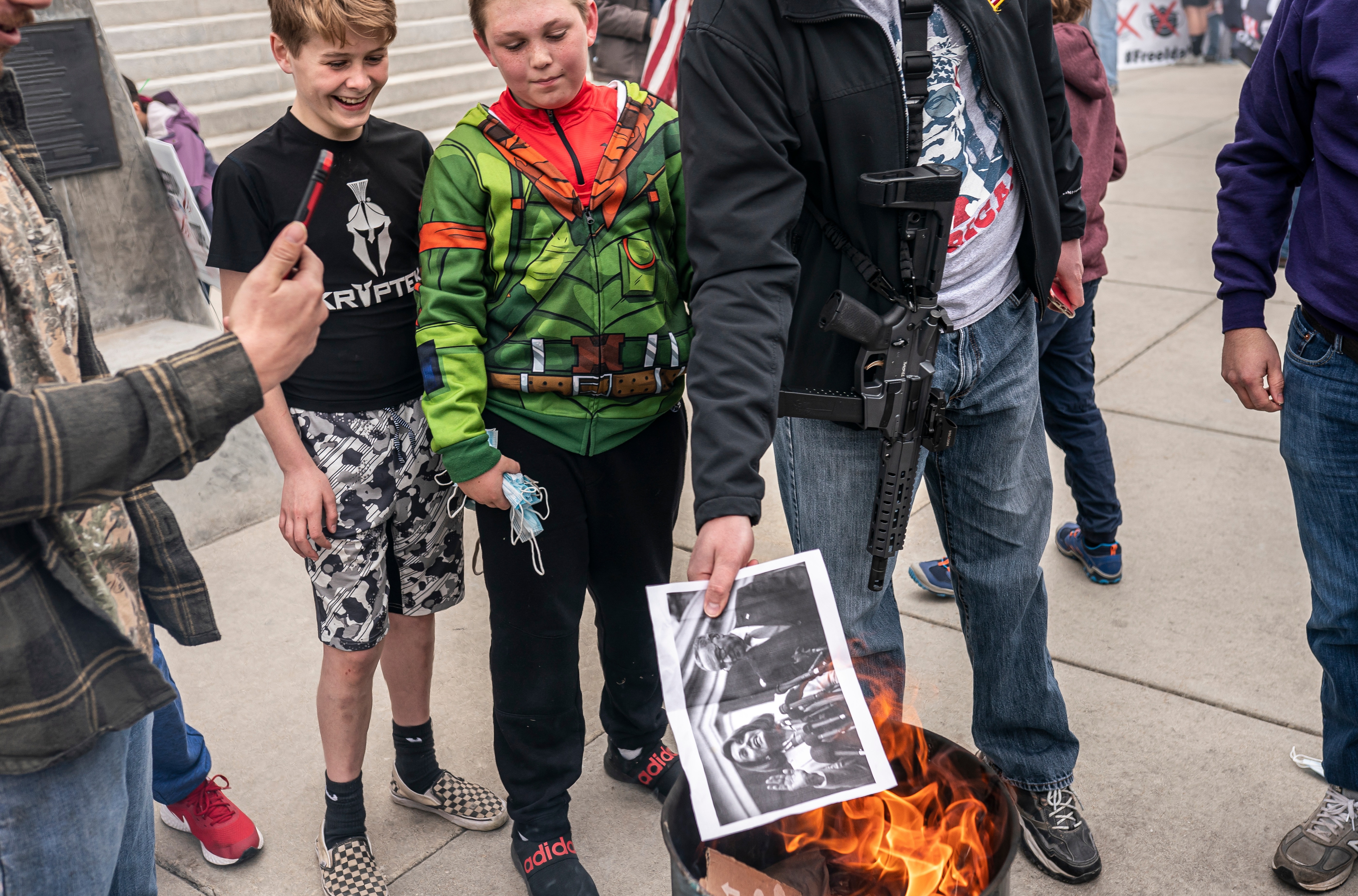 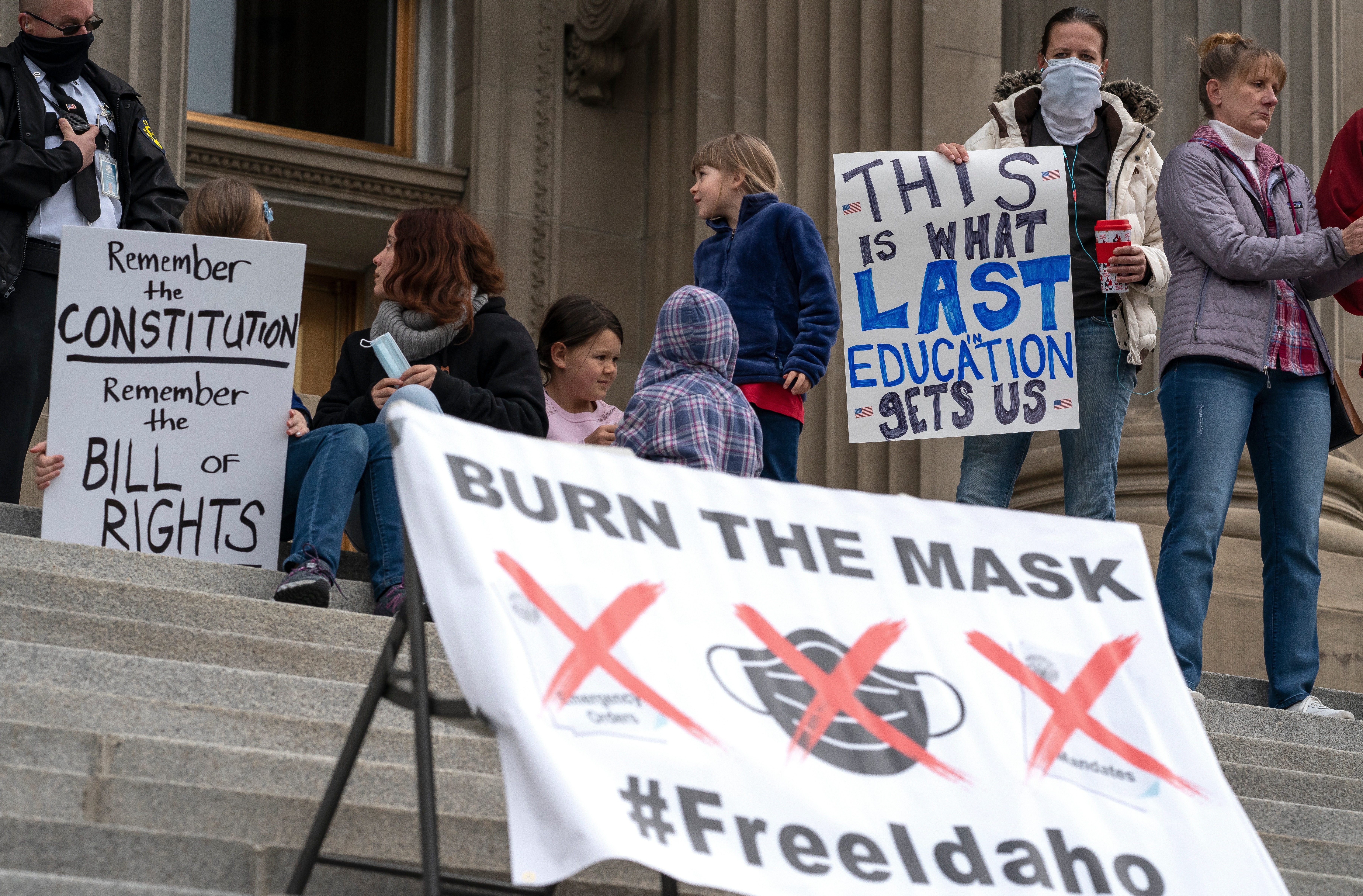 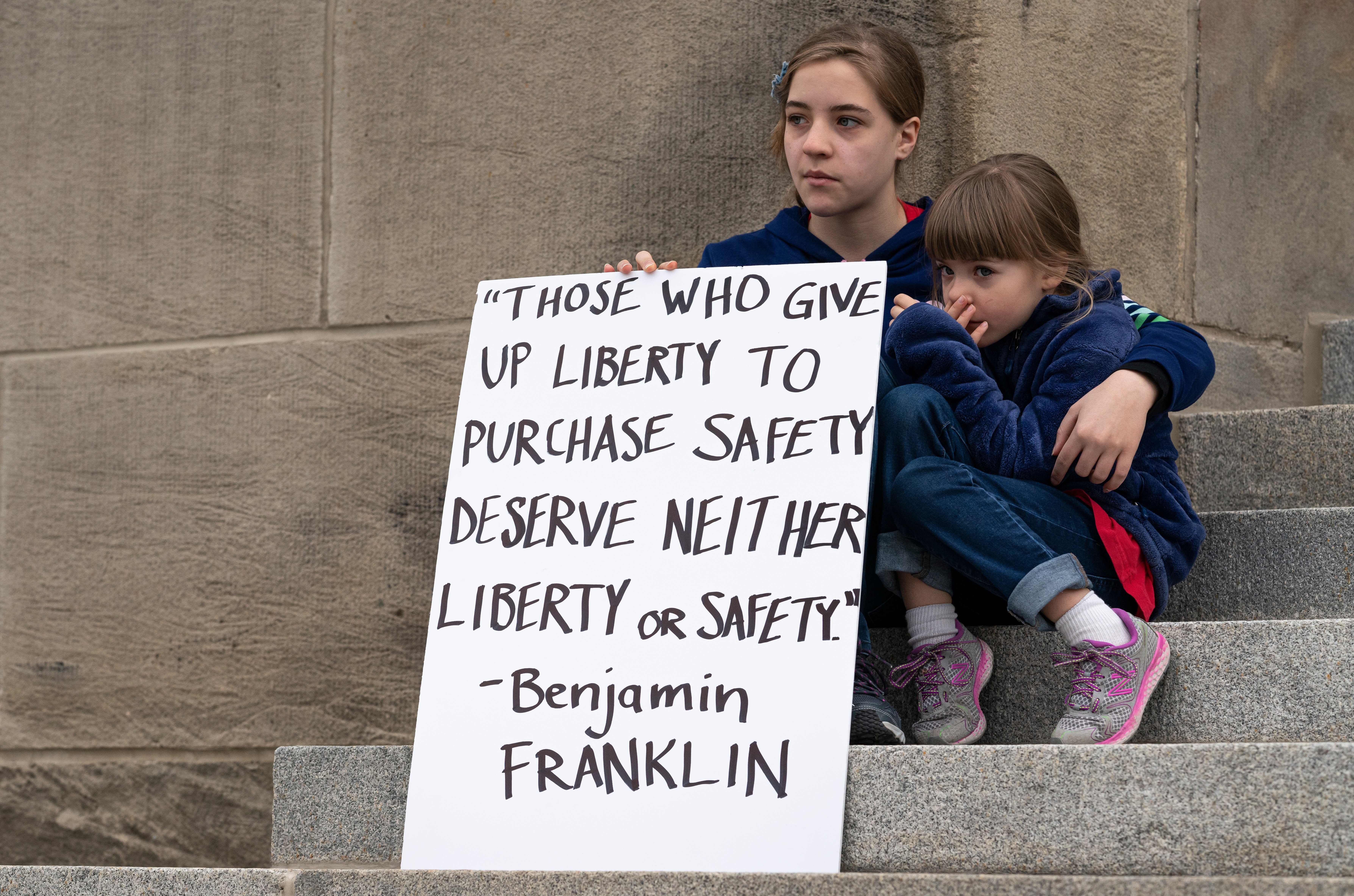 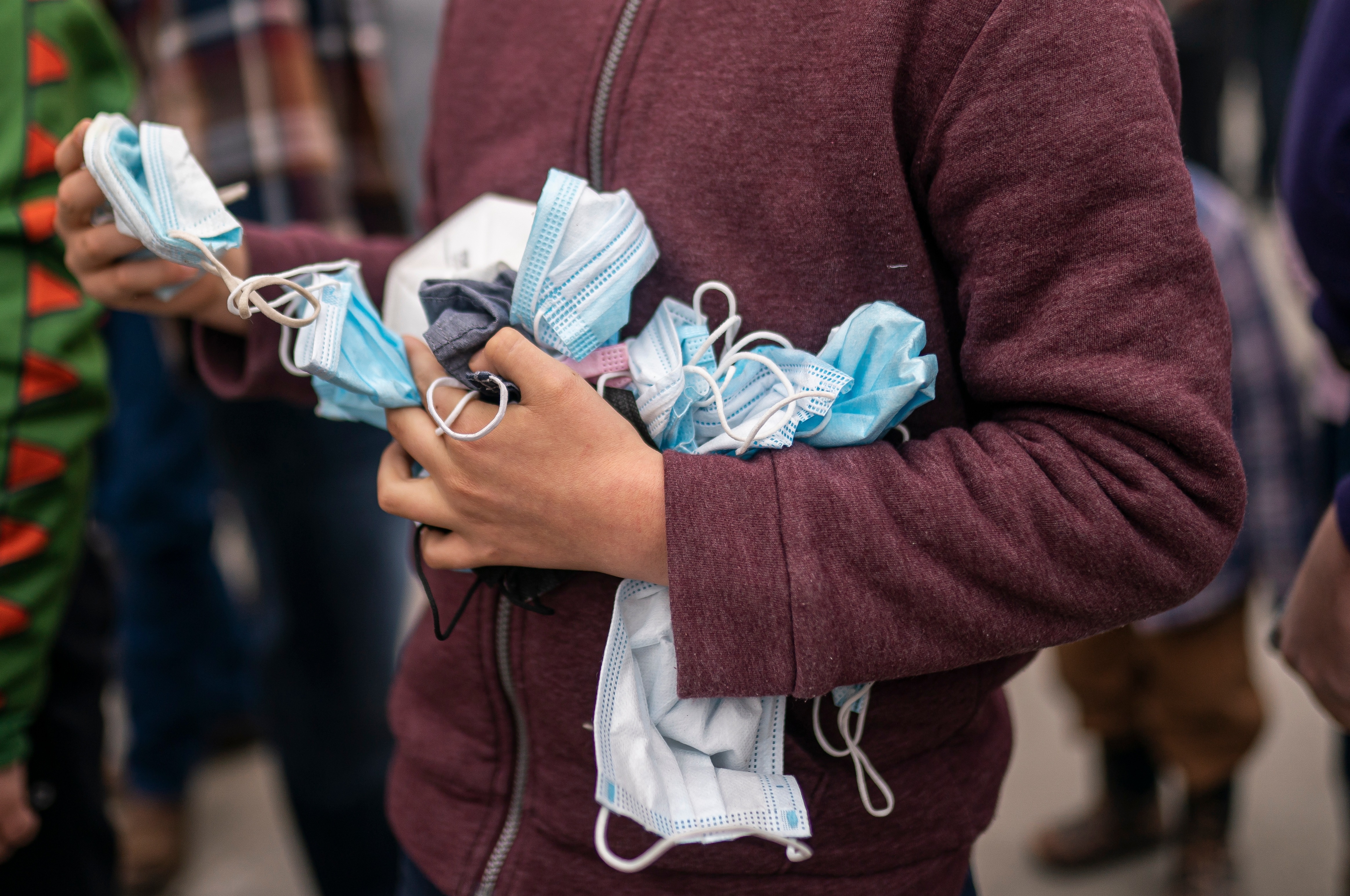 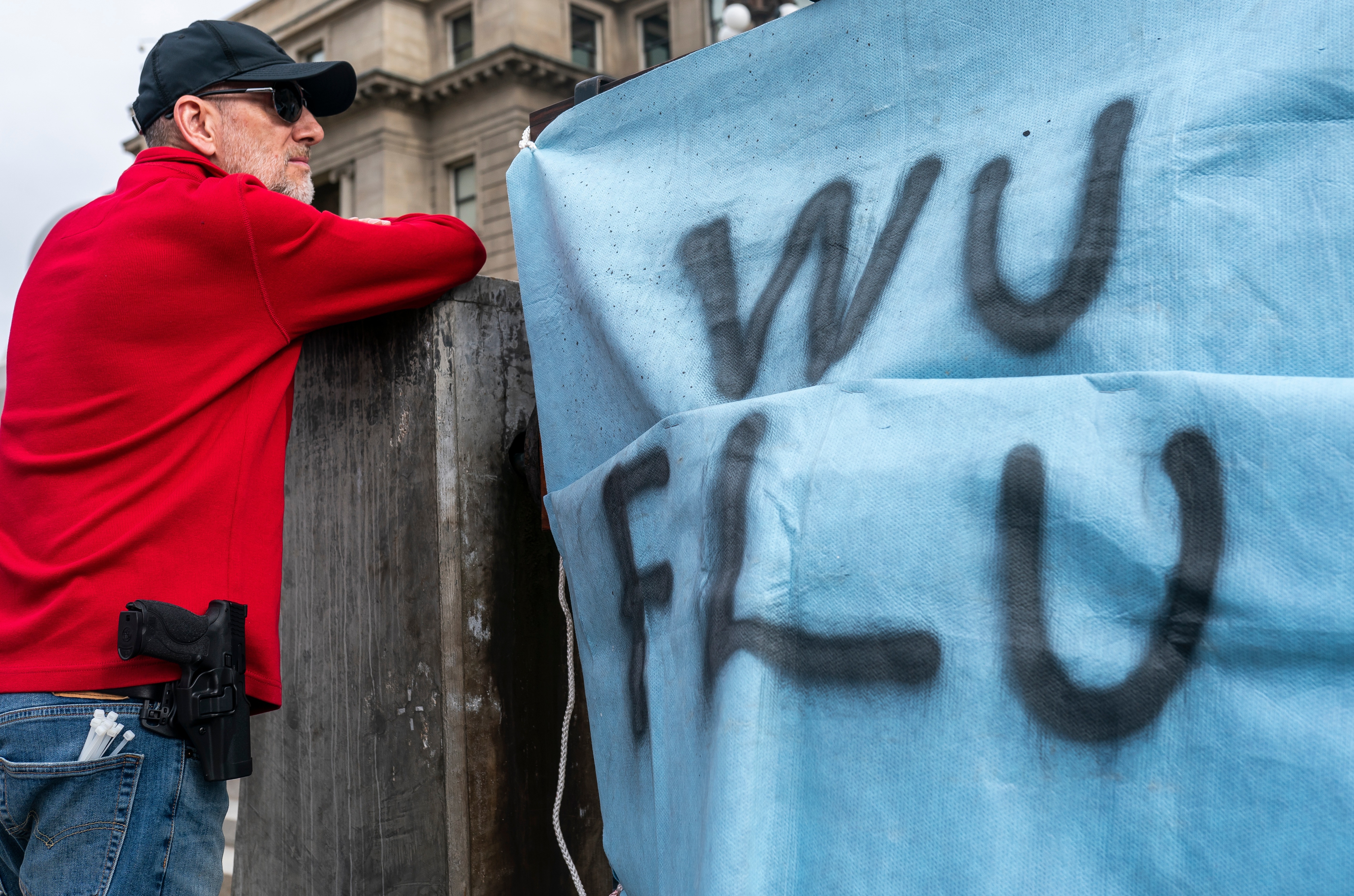 "Destroy them," said one person, leading other children to repeat the phrase and add: "Feed them to the fire" and "We don't want them in our lives."

As the children continued to quickly throw bunches of masks into the fire, some adults took notice of the chaotic scene, with one man saying: "Hold up, hold it. Let it burn."

As Olmos tweeted throughout the event, he reported that Idaho state troopers and Boise police had arrived urged organizers to extinguish the fire, adding "protestors told police to go away."

In a statement to Insider, an Idaho State Police spokesperson said: "During the event, an open flame was ignited in a barrel.

"Those involved with the event were informed both before and during the event that open flames are not allowed on State Capitol grounds.

"The incident is under review."