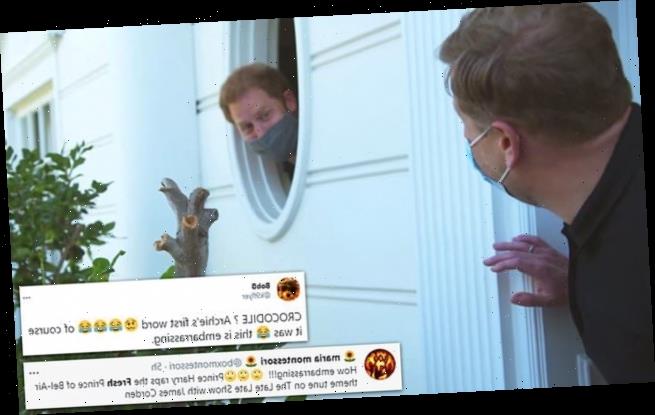 ‘Archie must be GENIUS!’: People aren’t convinced after Prince Harry claims his son’s first word was ‘crocodile’ – as others doubt the Duke spent his youth watching the Fresh Prince after ‘cringey’ rap routine

During a chat with James Corden, when asked what Archie’s first word was, the Duke of Sussex said: ‘Crocodile, three syllables.’

But critics appear baffled, with some demanding ‘proof’ that 21-month-old Archie can say the three-syllable word.

Some people on social media have also been left unimpressed by Harry’s rendition of The Fresh Prince rap, which he performed during the extraordinary Late Late Show interview. 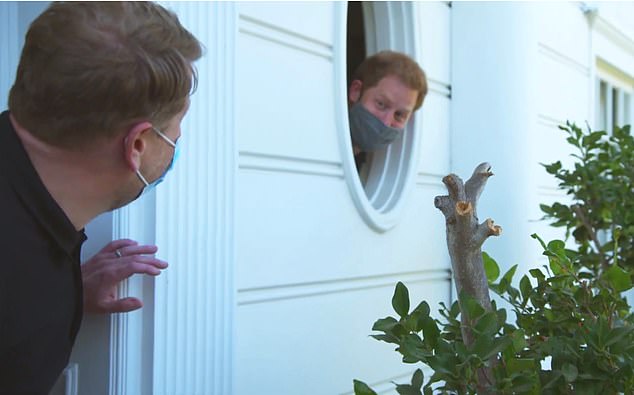 Harry (right) appears on The Late Late Show with James Corden (left), which came out today 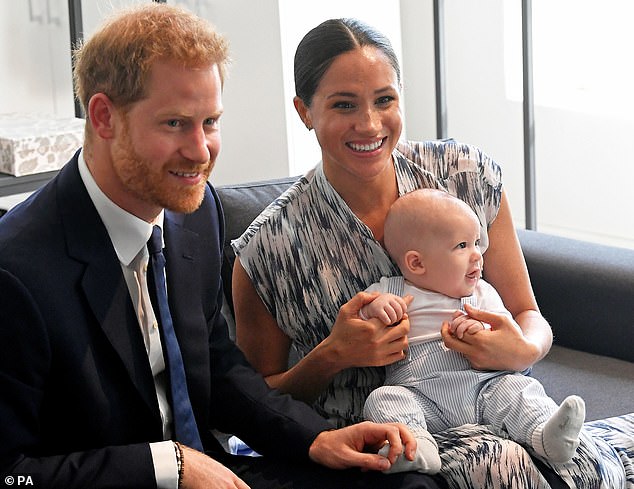 Prince Harry also told the comedian that the nightly routine for his 21-month-old son with wife Meghan Markle involves ‘tea’, a bath and a bedtime story.

And the Duke revealed in a segment for The Late Late Show that Archie has the ‘most amazing personality’ and is already putting four words together and singing songs.

Harry, 36, who now lives in a £11million mansion in California after stepping down as a senior royal last year, told Corden: ‘My son is now just over a year and a half.

‘He is hysterical, he’s got the most amazing personality. He’s already putting three, four words together, he’s already singing songs.’

But the chat sparked debate online, with some social media users questioning the Duke’s claims about Archie’s first word.

One wrote: ‘I want to hear Prince Archie saying ‘crocodile”, while another tweeted: ‘No way was crocodile his first word.’

In another extraordinary moment Harry rapped the theme tune to The Fresh Prince Of Bel-Air outside the mansion where it was filmed.

While some fans praised the ‘brilliant’ moment, others were less than impressed.

On social media user branded it ’embarrassing’ while another added: ‘I wonder why I don’t watch TV anymore.’

Harry went on: ‘Interesting, my grandmother asked us what Archie wanted for Christmas, and Meg said a waffle maker. She sent us a waffle maker for Archie.

‘Breakfast now, Meg makes up a beautiful organic mix. In the waffle maker, flip it, out it comes. He loves it. And now I have waffles for breakfast.

But Corden pointed out: ‘Sorry, you’re glossing over the fact that I cannot for the life of me imagine the Queen ordering a waffle maker to be sent to Santa Barbara. I can’t get my head around…’

Harry responded: ‘I don’t even know how to comment on that. Archie wakes up in the morning and literally just goes: Waffle? Done.’

Asked about a normal night in, Harry said: ‘Depending on how the day’s been, how busy it’s been, we’ll do Archie’s tea, give him a bath, read him a book, put him down.

‘Go downstairs, Meg might cook a meal, might order a takeaway. Go upstairs, sit in bed, turn the TV on and watch some Jeopardy, maybe watch a little bit of Netflix.’

Harry also addressed the controversy over The Crown’s portrayal of his family’s history and defended the Netflix drama, saying it does not ‘pretend to be news’.

In addition, he said both the Queen and the Duke of Edinburgh can use Zoom and have seen Archie ‘running around’ in California.

Asked by Corden how he sees his life after lockdown, Harry said: ‘My life is always going to be about public service and Meghan signed up to that.’

And on the decision to walk away from the royal family, he said it ‘was never walking away, it was stepping back rather than stepping down’.

Harry said he needed to move his family away but insisted: ‘I will never walk away, I will always be contributing. My life is public service.’