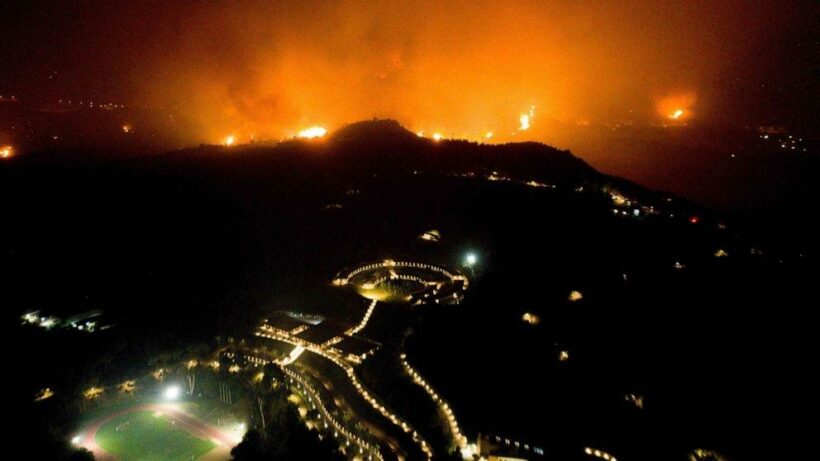 ATHENS — Firefighters are working to extinguish dozens of fires across Greece, where over 100 wildfires have started in the past day.

In the town of Evia, 90 miles from Athens, the Greek coast guard and private-owned boats are evacuating people from the beach where residents and tourists fled the flames. According to the Athens News Agency, 90 people have been transported to safety so far.

Greece is facing what has been described as its worst heat wave in more than three decades.

Greece’s Civil Protection Chief Nikos Hardalias said 118 wildfires broke out over the past 24 hours in the country. An EU disaster response group said firefighters and water-dropping planes were being sent to Greece, as well as Italy, Albania and North Macedonia, where fires have also broken out.

More than 500 firefighters, 150 vehicles, five aircraft and nine water-dropping helicopters have been mobilized, as well as several groups of volunteers.

Thousands were evacuated in several suburbs north of Athens, including in the town of Varympompi, where several properties were burnt to the ground. Firefighters sprayed water on burned cars and metal structures to prevent another fire from starting.

“A lot of people were scared,” Alex, a volunteer firefighter, told ABC News. “We saw houses after houses burnt, there’s a lot of damage.”

The Hellenic Army is assisting with foot patrols and airborne firefighting assets.

An initial calculation by the National Observatory of Athens indicates that between Aug. 1 and Aug. 4, around 14,826 acres were burned in Greece’s wildfires. That’s more than 50% of the area burned in entire fire seasons of previous years: 25,639 acres burned during the 2020 fire season in Greece, and 23,240 acres burned in 2019.

Athens saw temperatures climb as high as 113 degrees Fahrenheit on Tuesday and nearly 108 on Wednesday.

Authorities reported no serious injuries. An assessment of the damage caused so far is yet to be completed, but the national grid operator has warned that the capital’s power supply could be “endangered” after part of the transmission system shut down.

Now, the danger is that the blaze could reach archeological sites in the western Peloponnese. Greek authorities ordered evacuations in the nearby villages, according to Reuters.