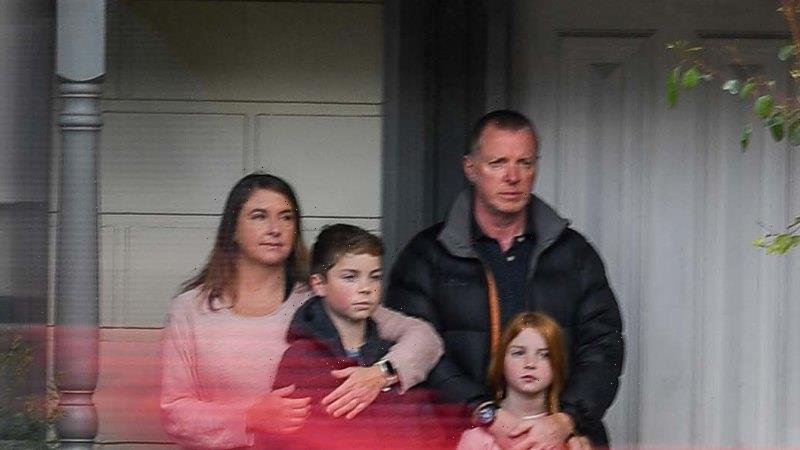 The Victorian Ombudsman is investigating allegations the Andrews government is failing to prevent an increase in truck traffic in Melbourne’s inner west following the completion of a new toll road, the $6.7 billion West Gate Tunnel.

Residents living near the Port of Melbourne who fear the more than threefold rise in daily truck trips have accused the government of turning its back on them, while the trucking industry agrees that a lack of government action has caused trucks to favour inappropriate routes through residential streets. 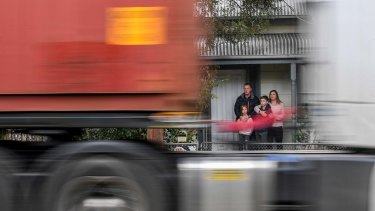 Kathleen and Rob with their children Matt (11) and Georgia (8) live on Williamstown Road in Seddon, they are sick of worsening truck traffic and pollution on their streetCredit:Joe Armao

The Andrews government says Transurban’s new toll road linking the West Gate Freeway at Yarraville with CityLink in Docklands and the Port of Melbourne will remove 9000 trucks from local streets.

The new alternative river crossing to the congested West Gate Bridge is set to remove an additional 5000 trucks from rat runs to avoid the West Gate Freeway.

But unlike truck-heavy routes such as Somerville Road and Francis Street in Yarraville that will have truck curfews 24 hours a day, seven days a week when the delayed project is finished, Williamstown and Millers roads will face none whatsoever.

By 2031, government data shows the West Gate Tunnel will funnel more trucks onto these roads: Up to 2100 truck trips on a section of Williamstown Road and 7500 on Millers Road, which is a more than threefold increase.

Planning Minister Richard Wynne acknowledged the “significant increase in truck traffic” on Millers Road when he green-lighted the project in 2017 and vowed to set up a traffic corridor study to “reduce impacts on Millers Road to acceptable levels”.

But nearly three years after the Millers Road and Williamstown Road Corridor Study was launched, Victoria’s Ombudsman Deborah Glass has confirmed she is now pursuing resident complaints that the corridor study has stalled.

“My office has received complaints about various issues associated with the West Gate Tunnel Project. We have already assessed some complaints and are currently looking into others,” Ms Glass said.

“If people affected have experienced issues with the construction of the West Gate Tunnel Project, I encourage them to get in contact with my office.”

Williamstown Road resident Graeme Hammond, who was part of a working group contributing to the corridor study, said the government hasn’t committed to any of the traffic solutions explored in the study, which he said must be publicly released.

He said viable diversion for trucks in Melbourne’s inner-west was needed to link the port to Tottenham’s industrial precinct via Grieve Parade in Altona North or Paramount Road in Tottenham.

“I think overall the West Gate Tunnel was a really good idea to get trucks out of the inner-west, but they did half a job because they’ve left trucks running down Williamstown Road through a residential area by not creating a proper diversion,” Mr Hammond said.

The toll road is backed by the trucking and logistics industries, as it will create new access to the Port of Melbourne, relieving congestion around the port and the chronically bottlenecked West Gate Bridge.

Peter Anderson, the head of trucking lobby group Victorian Transport Association, said the tunnel would remove a number of “hurdles” for trucks accessing the port.

“The port is central to the quality of life that we all enjoy, our goods come through the port … it has a major economic benefit to the people of Victoria for it to work efficiently.”

He agreed that Williamstown Road was inappropriate for trucks and called for support on an alternate route that bypassed residential streets and said the government had turned down a proposal for 24/7 curfews on Williamstown Road.

Kathleen, who lives on Williamstown Road in Seddon, said Williamstown Road — which is lined with heritage-listed houses and surrounded by a school, tennis courts and ovals — was simply an inappropriate truck route.

The resident who did not wish to have her surname published, said the expected spike in trucks would make the road unsafe and more polluted in areas that already have state’s highest rates of asthma in children.

Her family has lived in the area for three generations and said the same improvements being pushed more than a decade ago by residents were still not being enforced.

“How does the government listen? By building the toll road that doesn’t solve the problem, it just shuffles it around,” she said.

A government spokeswoman said the department was engaging with the community and industry about improvements to transport in the inner-west.

The area would be prioritised as a ‘test-bed’ for clean energy truck technology trials, while the West Gate Tunnel project was overseeing ongoing air quality monitoring.

“We’re working to minimise the impact of heavy vehicles by investing in a number of strategies to take trucks off local streets and encourage more freight onto rail,” a government spokeswoman said.

“We’re delivering on the requirements of the Environment Effects Statement – the Millers Road and Williamstown Road Corridor Study Working Group met a number of times in 2018 and 2019 and its work is now complete.

“The ideas and suggestions put forward by the Working Group will inform future development planning for the Williamstown Road and Millers Road corridors as well as the broader network. There was no requirement whatsoever to release the corridor study.”