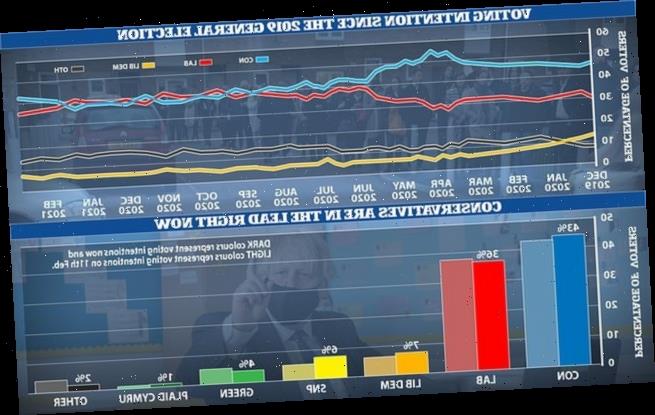 Boris Johnson and the Conservative Party have extended their poll lead over Labour to seven points, according to a new survey.

An Opinium poll put the Tories on 43 per cent and Labour on 36 per cent, the biggest gap recorded by the firm since July of last year.

The numbers suggest Mr Johnson is enjoying a ‘vaccine boost’ as the Government’s roll-out of coronavirus jabs continues to exceed expectations.

The survey, conducted between February 24-26, found that approval of the Government’s handling of the pandemic has increased this week. 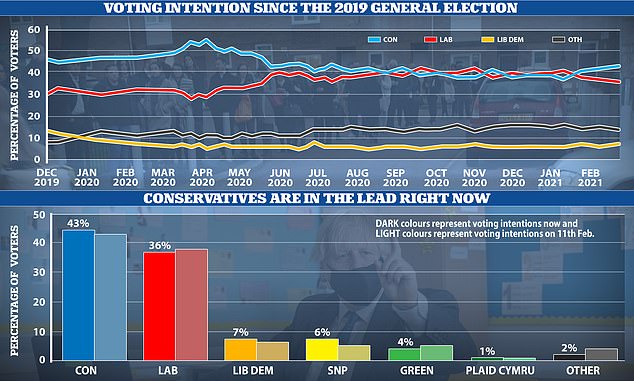 Some 36 per cent now approve, an increase of three points, while 45 per cent disapprove which is unchanged.

Approval of the Government’s handling of the vaccine roll-out has also gone up.

Some 68 per cent of respondents approve of the job ministers are doing, up six per cent, while 12 per cent disapprove.

Overall, the poll puts the Tories on 43 per cent and Labour on 36 per cent in terms of general election voting intention.

Meanwhile, the Lib Dems are on seven per cent, the SNP is on six per cent, the Green Party is on four per cent and Plaid Cymru is on one per cent.

The seven point Tory lead over Labour is up on the five point lead recorded two weeks ago. 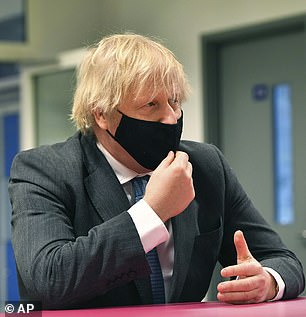 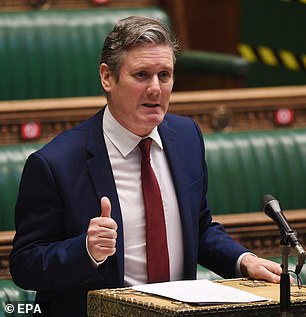 Boris Johnson remains ahead of Sir Keir Starmer on the question of who would make the best prime minister, 33 per cent to 25 per cent

The poll also suggested that the approval ratings battle between Mr Johnson and Sir Keir has narrowed.

Some 39 per cent of people approve of the job Mr Johnson is doing while 41 per cent disapprove, giving a net score of minus two.

Sir Keir’s performance is backed by 33 per cent who approve while 28 per cent disapprove, giving him a net score of plus five.

However, Mr Johnson remains ahead on the question of who would make the best prime minister, 33 per cent to 25 per cent.