During her almost two-decade career in toy shops, Flick Davies has encountered scores of dads who won’t let their sons play with dolls or prams. 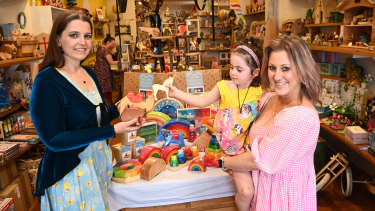 “I’ll say, ‘look at Jamie Oliver, he’s a successful man in a kitchen’, or I’ll ask the dad whether he ever pushes a pram,” Ms Davies said. “I asked the grandma how she got to the shop and she said she drove.”

Ms Davies is the store manager of Honeybee Toys in Malvern, which is among a growing number of retailers steering clear of boys and girls sections, overtly pink or blue tones and promoting gender-neutral toys.

The issue of gender-neutral toys has once again been thrust into the spotlight after one of the world’s most popular toy brands, Lego, announced earlier this month it would remove gender stereotypes from its products.

It came as California became the first US state to require some retailers to have gender-neutral children’s sections, with a growing body of research finding that gender stereotyping can restrict children’s emotional and psychological development.

“Gendering toys restricts children’s growth,” Ms Davies said. “It locks them into a mindset that certain activities are not for them.”

Donna White, the brand manager for Associated Retailer Limited, which owns the popular Toyworld trademark, encourages the cooperative’s 121 independently-owned stores to display toys based on their function, rather than gender.

“We would love it if there was no pink or blue, but that is out of our control,” she said.

“The gender of a child doesn’t affect anything we do. We buy toys because kids like playing with them.”

It’s a stance that has been embraced by other large toy retailers.

“We are committed to connecting children with toys that support play at all stages of their development, regardless of gender,” he said.

While Lego’s decision to stop marketing its toys distinctly to boys and girls has been welcomed by many parents, researchers and gender equity campaigners, some people have mixed feelings about the move.

Toy shop owner Anne Carr said Lego’s popular Friends range — which was introduced in 2012, uses lots of pink and purple and includes construction sets of hairdressing and beauty salons — attracted girls to the toys for the first time.

“Previously they weren’t gravitating towards it,” said Ms Carr, who runs Toyworld stores in Beaumaris, Knox and Ferntree Gully.

“I don’t think it was because girls didn’t want to build, they weren’t given the opportunity to build. The Friends range opened up scope. Children will choose what they want to choose.”

Dr Priest’s research has found that gender biases begin early in life, with some preschoolers believing that only boys can be policemen and only girls can be teachers or nurses.

She said gendered toys — which might include pink play kitchens or construction sets in packaging depicting boys — can fuel these damaging beliefs.

While she acknowledges that retailers have made great progress when it comes to promoting gender-neutral toys, she said more work was needed.

Research by the Geena Davis Institute on Gender in Media, which was commissioned by Lego, found parents encouraged their daughters to take part in activities that were performative, artistic and domestic and urged their sons to engage in activities related to physicality and science, technology, engineering and mathematics (STEM).

More than 70 per cent of boys worried about being teased if they played with toys associated with the opposite gender, compared with 42 per cent of girls.

Carli Rosenthal follows her four-year-old daughter Sloane’s lead when it comes to buying toys. While the bubbly preschooler loves unicorns and dolls, she also adores playing with her wooden bow and arrow and learning about science.

“She’s pretty balanced,” Ms Rosenthal said. “I don’t feel pressured at all. If she went out and she had a toy that didn’t fit with a gender stereotype, it wouldn’t bother me.”

Rosenthal, who works as a paediatric occupational therapist, welcomes a recent push by many retailers to market toys in a more gender-neutral way. She was recently struck by a Kmart advertisement of a boy pushing a toy pram.

“I thought, ‘finally!’ You see dads pushing a pram, so why not a little boy?”