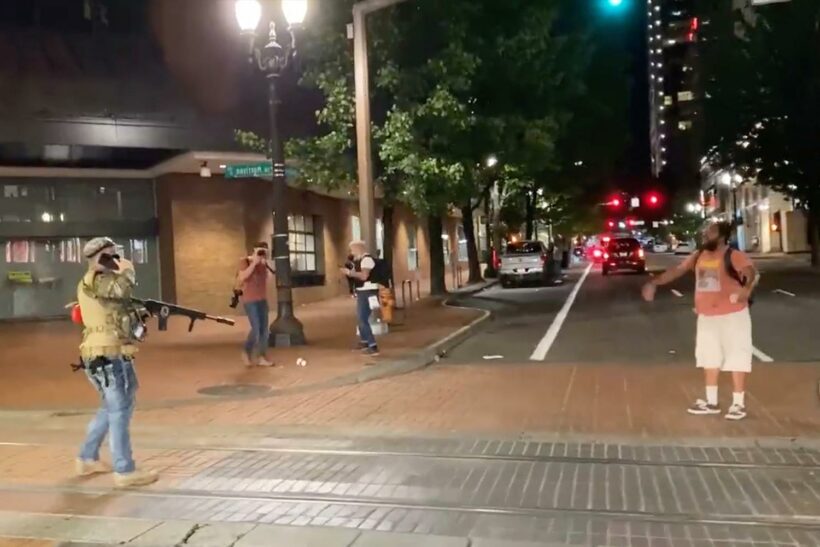 The armed man, who has not been named, was seen patrolling around the streets of the Oregon city alone and unopposed for upwards of 17 minutes as Antifa and far-right groups violently clashed on Sunday. 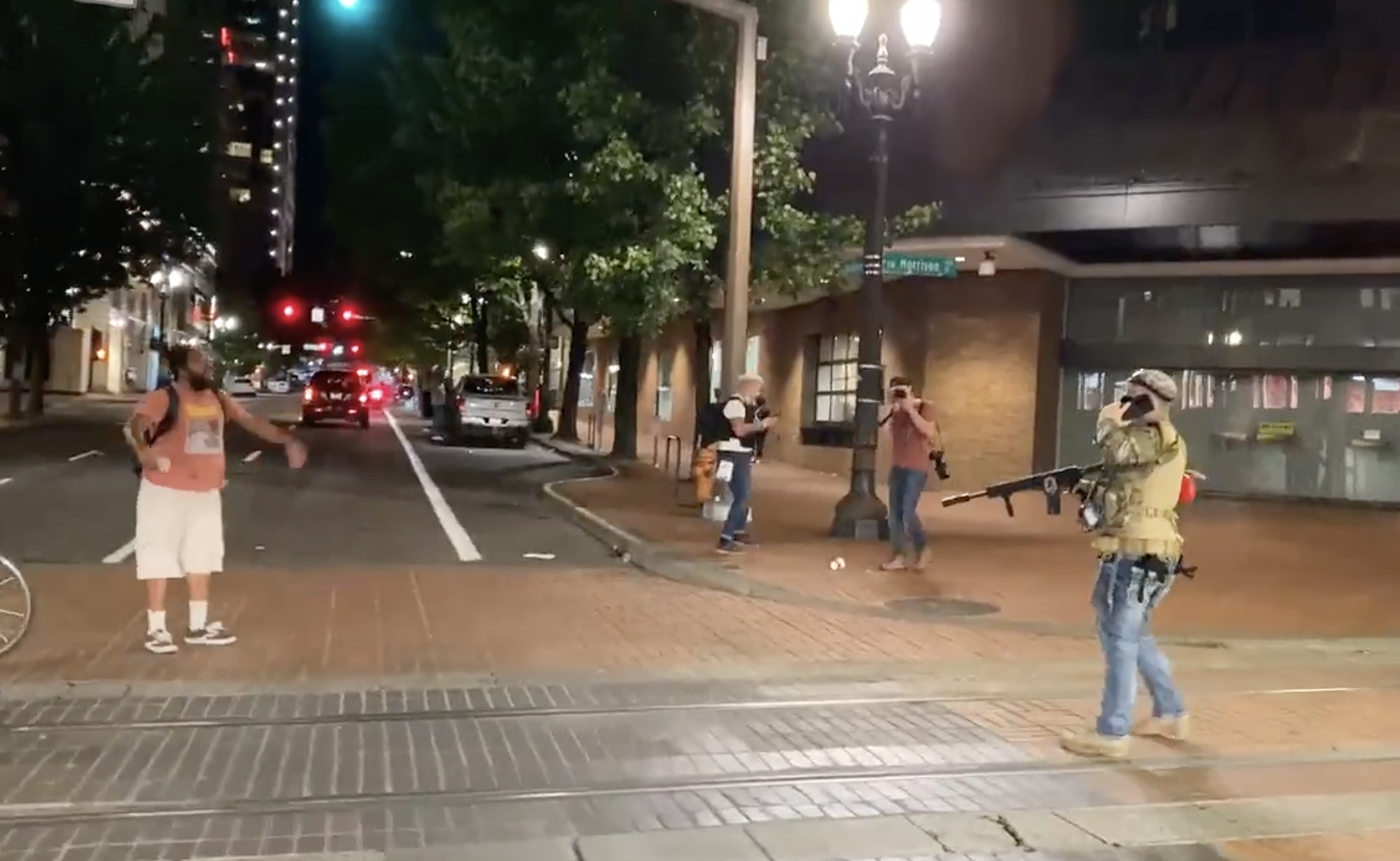 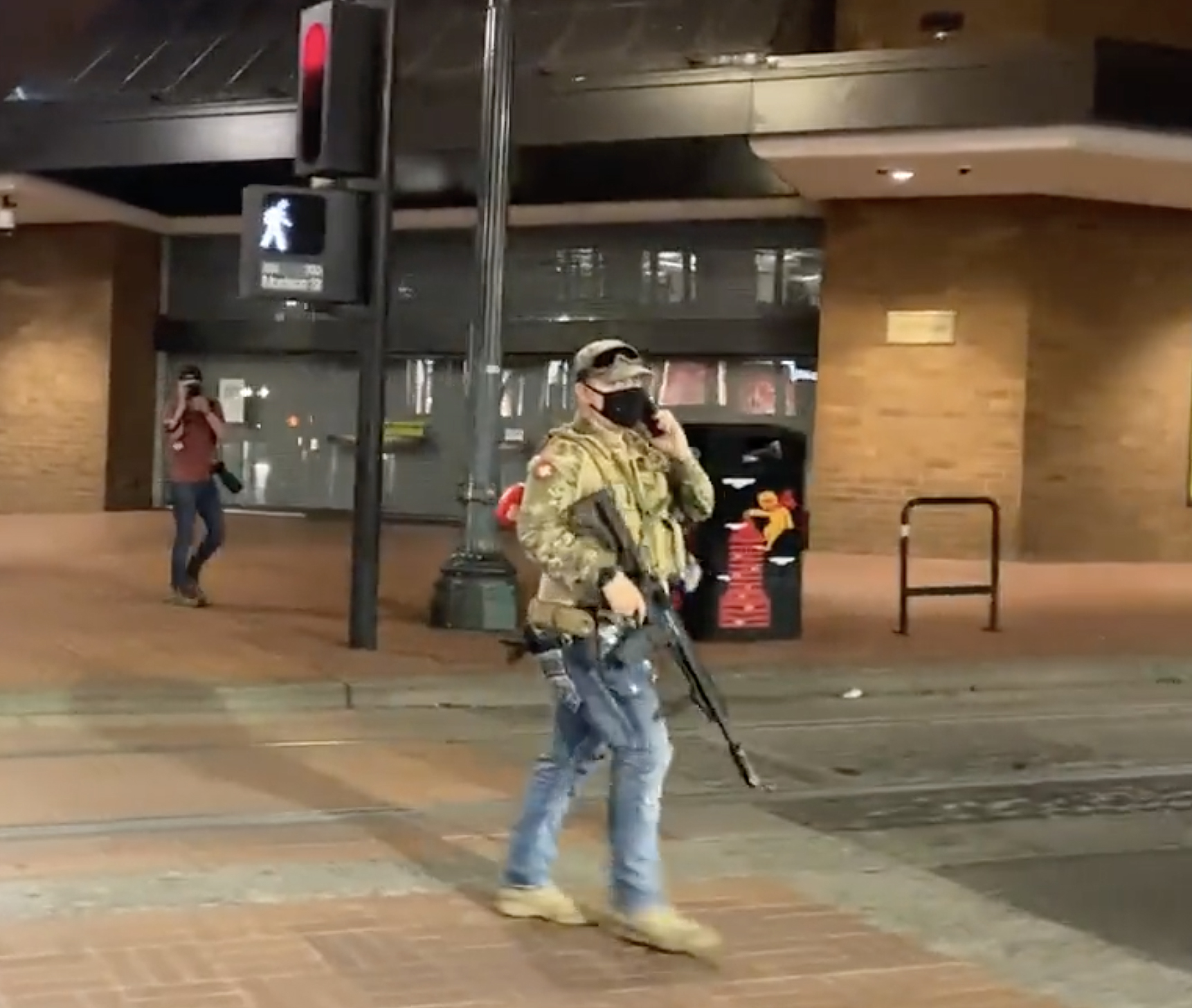 Reported to be a member of the far-right hate group Proud Boys by local journalists, the man aimed his gun at a number of people, including members of the press.

Freelance journalist Sergio Olmos captured the man pointing his rifle at one black bystander who was among a group tailing him down the street.

As the man raises the barrel towards the bystander, the bystander is heard screaming: "What the f**k are you going to do? You're going to shoot a black guy in the middle of an intersection? I dare you. I f**king dare you."

The alleged Proud Boys member is then seen raising his phone up to his ear and continuing on down the street.

At one stage he walks past a crowded bar with the grip of his rifle grasped in his right hand.

"Hey, this guy is armed!" one man can be calling out to the crowd ahead.

"He's already tried to shoot me," the bystander can be also be heard shouting out in warning. "Think about that."

Patrons outside of the restaurant can also be heard heckling the man.

Olmos claims that police had driven past the man and the group following him without intervening.

After more than 20 minutes, the man is seen walking towards the Justice Center and handing himself in to a group of waiting officers.

As he walks towards the cops, the man is seen briefly speaking with one officer before placing his hands on his head and marching out of sight.

Olmos later reported that an officer told him that the armed man actually called police, telling them he was being followed by a crowd.

"I asked if police told the man to walk to justice center, the police officer nodded in the affirmative," Olmos tweeted.

It's currently unclear if the man was arrested after handing himself in to police. Local officials have not responded to a request for comment.

Oregon is an "open carry" state, meaning most citizens are legally permitted to carry firearms openly without a permit.

However, in Portland it is unlawful to carry an unauthorized loaded firearm in a public place.

It's currently unclear if the man's weapon was loaded, or if it was real.

Still, Zakir Khan, board chair of Oregon's Council on American-Islamic Relations, condemned the footage and the police's response in a tweet.

"Portland Police will storm a homeless camp with AR-15's drawn if there is chatter about a pellet gun, but if a Proud Boy aims an assault rifle at pedestrians and the press in the middle of downtown Portland they won't even respond."

Similarly, the founder of Moms Demand Action for Gun Sense in America, Shannon Watts, wrote: "Oregon laws allow the open carry of loaded long guns without a permit, which empowers these armed extremists to threaten and intimidate anyone who disagrees with their ideology."

The controversial incident unfolded as clashes between Antifa and right-wing groups erupted in Portland over the weekend.

The chaos unfolded over the appearance of a controversial Canadian pastor in the city on Saturday.

A church service held at the Battleship Oregon Memorial off Southwest Naito Parkway Saturday was led by Artur Pawlowski, who has previously been arrested for violating COVID-19 restrictions by hosting maskless ceremonies with no social distancing.

Members of the Proud Boys provided security for Pawlowski as left-wing groups protested the event.

After the 90-minute service ended, members from both sides began firing paintballs and deploying pepper spray at one another.

That violence spilled out over into Sunday as both sides gathered on the parkway at another event.

Paintballs were once again fired by the far-right groups, to which left-wing groups responded by firing fireworks back at them. 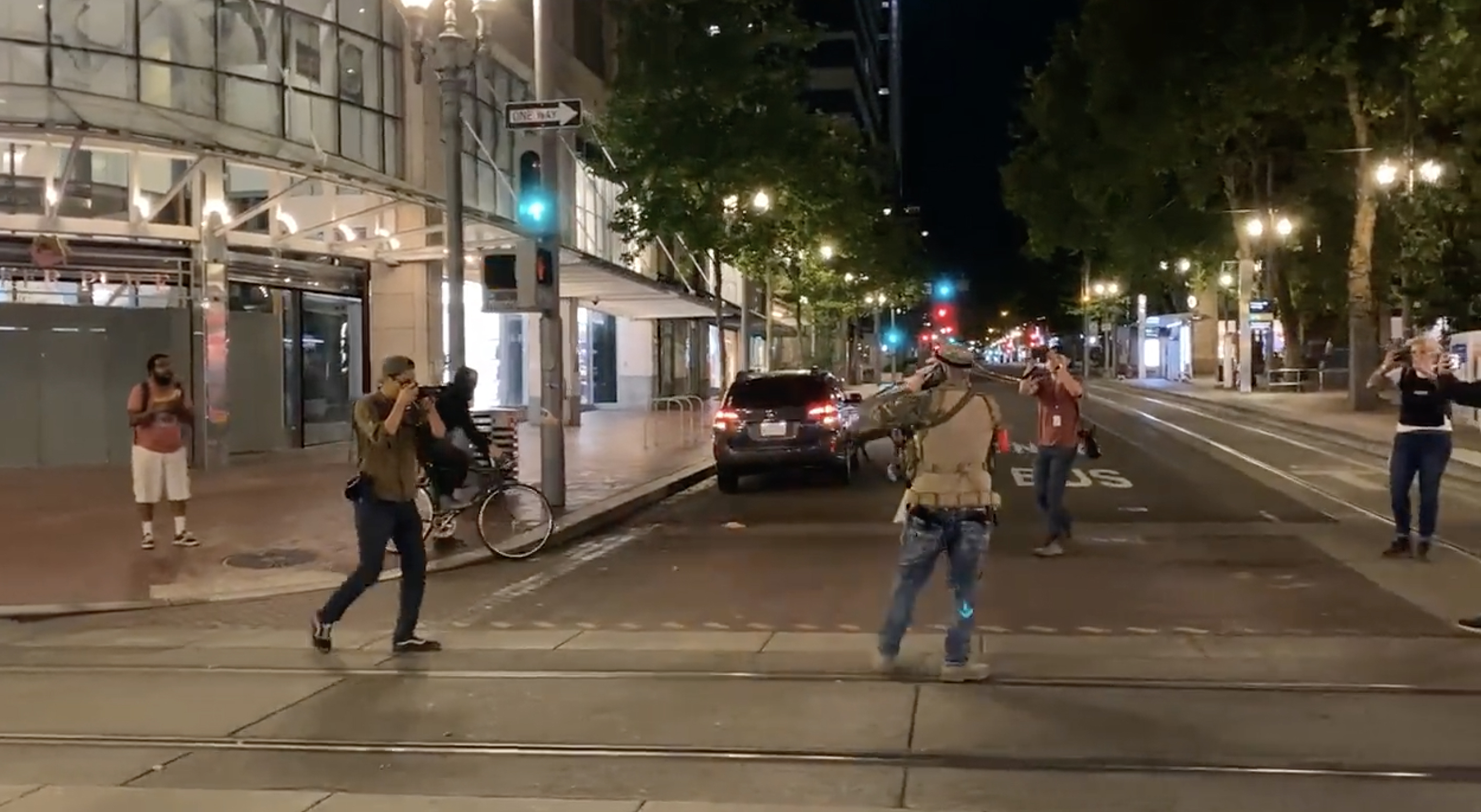 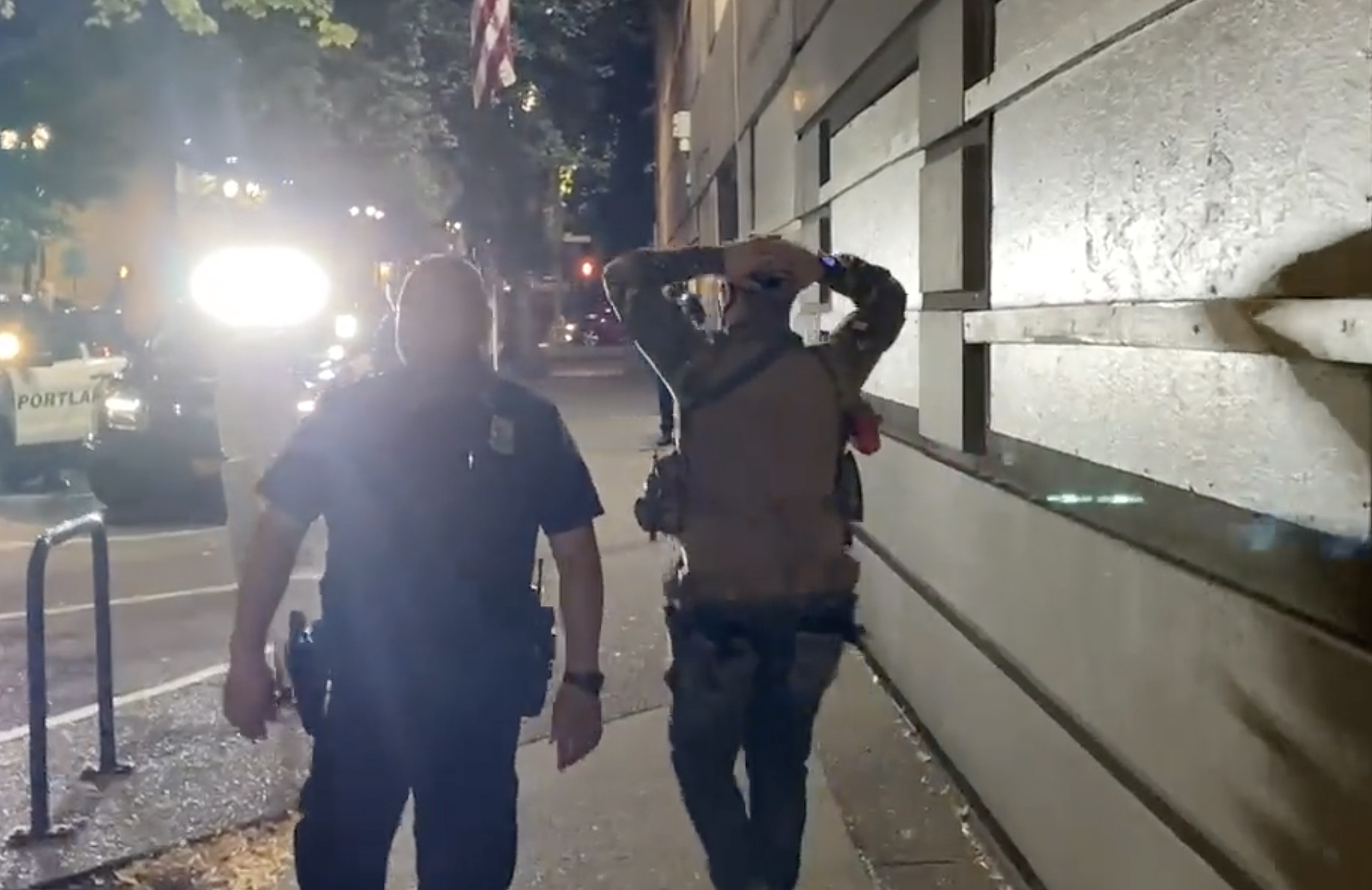 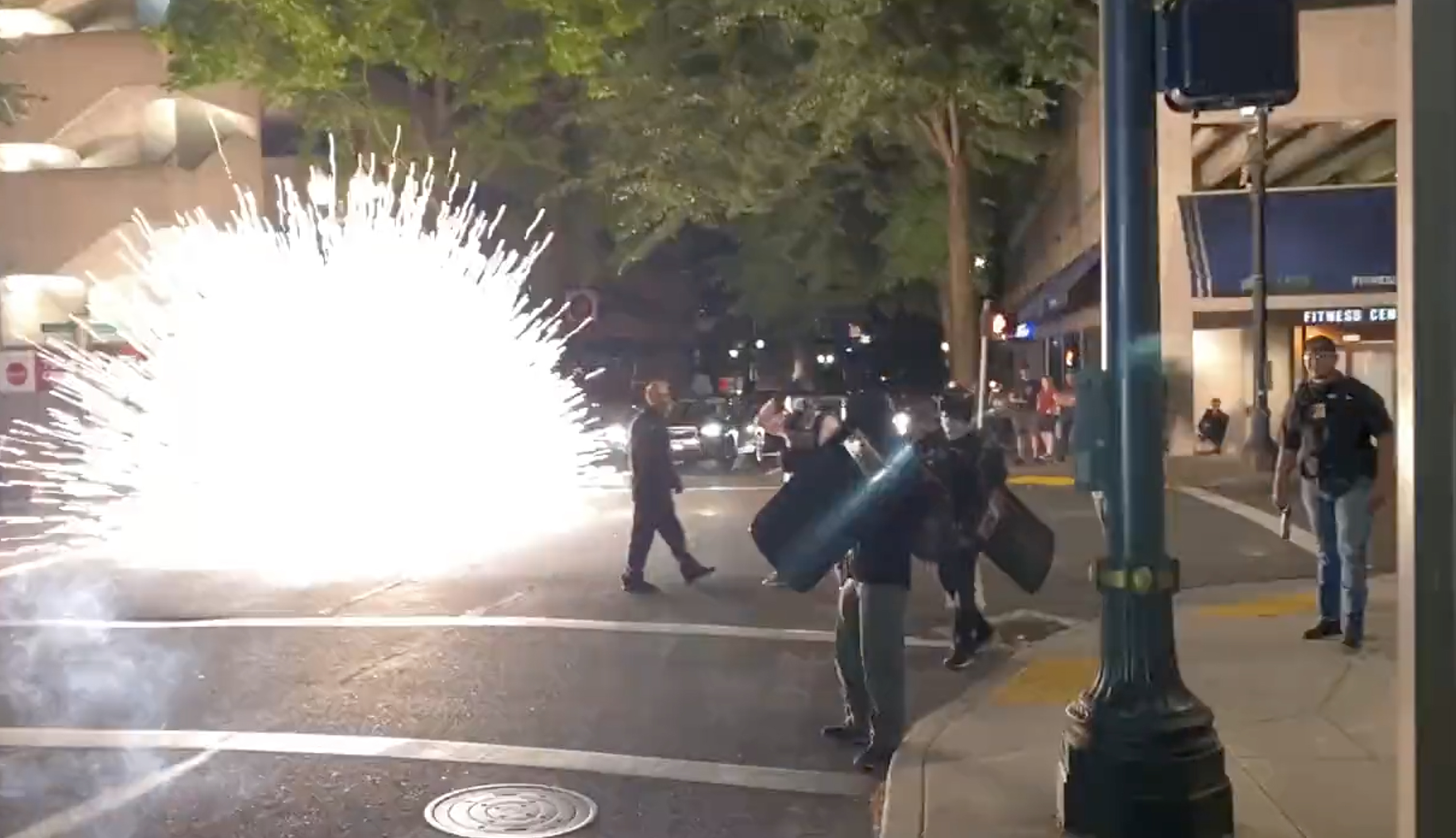