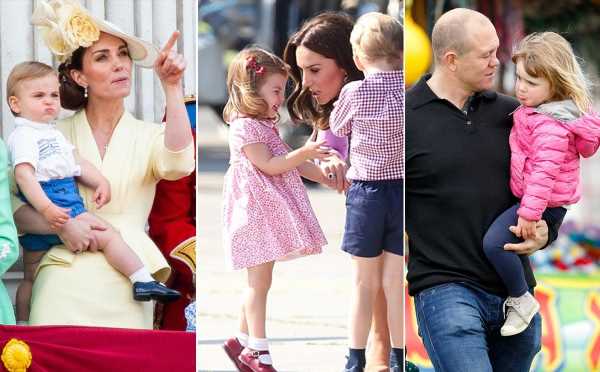 Kids will be kids and just because they're royal doesn't exclude them from the odd sulky moment.

While we're used to seeing the likes of Prince George, Princess Charlotte and Co all smiles for photographers with their royal parents, their not-so-cheerful moods have been caught on camera on occasion too. From dropped lips to tears and fed-up faces, royal children act just like our children do.

This photo above of Zara and Mike Tindall's daughter Mia from 2017 really tugs on our heartstrings. The snap was taken at the Burnham Market Horse Trials. We wonder what made Mia so sad?

Here's one pretty grumpy Prince George – the eldest child of the Duke and Duchess of Cambridge.

We're not sure why George was so fed up… perhaps a day of royal duties with his parents wasn't his choice of activity! The family were visiting the Royal International Air Tattoo at RAF Fairford in July 2016.

Oh dear. All eyes were on Princess Charlotte in this picture and her unhappy expression during the Queen's birthday Trooping the Colour parade. Charlotte's cousin Savannah Phillips lends a hand helping to cheer the young royal up.

What a pout! Granted, it must have been so overwhelming for little Louis to see the crowds outside Buckingham Palace at Trooping the Colour – so we're not surprised at his displeased demeanour. We would probably have been the same at that age!

MORE: 24 adorable photos of royal mums doting on their children

A young Mia looking most unhappy at the Festival of British Eventing at Gatcombe Park in August 2015.

Not so much of a sulk as a cry, sweet Princess Charlotte takes a tumble and is comforted by mother Duchess Kate. The family were visiting an Airbus factory during an official visit to Poland and Germany in July 2017.

The son of Prince William looks more than a little fed up watching the military parade at Trooping the Colour back in 2017. Must be tough being a royal child trying to smile 24/7.

Poor Harry! The young Prince is pictured having a teary moment as he sits with mum Princess Diana. The family were on holiday with the Spanish royal family at the Marivent Palace in Palma de Mallorca in July 1988.

The son of Prince Charles and the late Princess Diana does not look best pleased in this old snap from Trooping the Colour. We wonder what was bothering him!

A worried-looking Zara walks with her mother Princess Anne in August 1985 during a visit to Scrabster in Scotland.