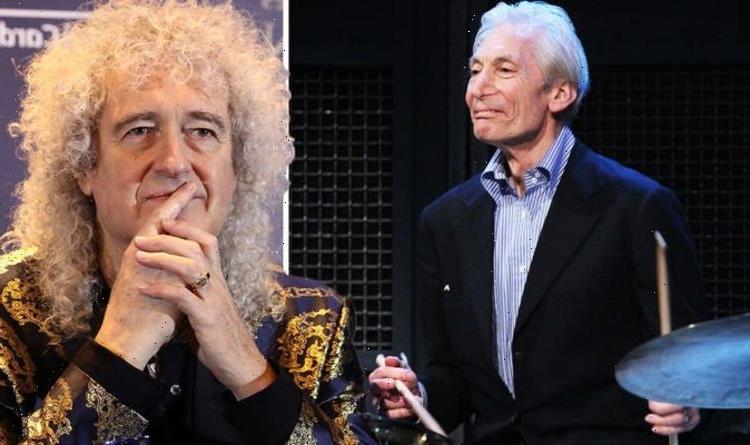 Queen guitarist Brian May, 74, has taken to Instagram to pay tribute to The Rolling Stones drummer Charlie Watts following his death today, aged 80. In a heartfelt post, the Queen star recalled working with the drummer years ago, who he went on to brand “the nicest gent” and a “pillar of strength” for his bandmates, Mick Jagger, Keith Richards and Ronnie Wood.

Bless you Charlie. Rest in Peace and Rock on. Bri

In view of his 2.9 million followers, Brian issued an emotional statement after the rock legend’s death was confirmed.

He wrote: “Sad sad news in the passing of Charlie Watts. Oh Lord.

“Deepest sympathies to his family – and to Keith, Mick and Ronnie to whom he was certainly beloved family.”

Alongside the caption, Brian posted two pictures of Charlie.

Brian went on: “First picture is as I remember him, smiling and calm – from the Rolling Stones Facebook page.

“The second picture here is from a session I did with Charlie [email protected] ago – the song was “Reaching Out” – with Paul Rodgers on vocals, Andy Fairweather-Lowe on rhythm guitar and myself on electric guitar.”

The star shared how he looked back on his time with Charlie, who he said brought “pure class” to the English rock band.

Brian continued: “It was a lovely moment. For some people this might be a cliché – but in Charlie’s case it’s the absolute truth – he was the nicest gent you could ever meet.

“And such a pillar of strength for the Rolling Stones – to whom he brought a touch of Jazz and a mountain of pure Class.

“Bless you Charlie. Rest in Peace and Rock on. Bri,” he ended the post.

The sad news of the drummer’s death comes weeks after he pulled out from The Rolling Stones’ US tour, No Filter, which was due to go ahead next month.

Charlie underwent a procedure and stepped down from the tour on the advice of his doctors, revealing at the time that his recuperation would “take a while”.

Although his operation had been “completely successful,” in order to avoid delaying the tour any further amid the coronavirus pandemic, Charlie asked musician Steve Jordan to replace him, before his tragic death.

Watts said in a statement earlier this month: “For once my timing has been a little off.

“I am working hard to get fully fit but I have today accepted on the advice of the experts that this will take a while.”

The drummer’s London publicist Bernard Doherty confirmed the sad news of his death in a statement to the PA news agency this evening.

“It is with immense sadness that we announce the death of our beloved Charlie Watts,” the statement read.

“He passed away peacefully in a London hospital earlier today surrounded by his family.”

It went on to describe him as “a cherished husband, father and grandfather” and “one of the greatest drummers of his generation”.

He is survived by his wife Shirley Ann Shepherd, their daughter Seraphina, and granddaughter Charlotte.