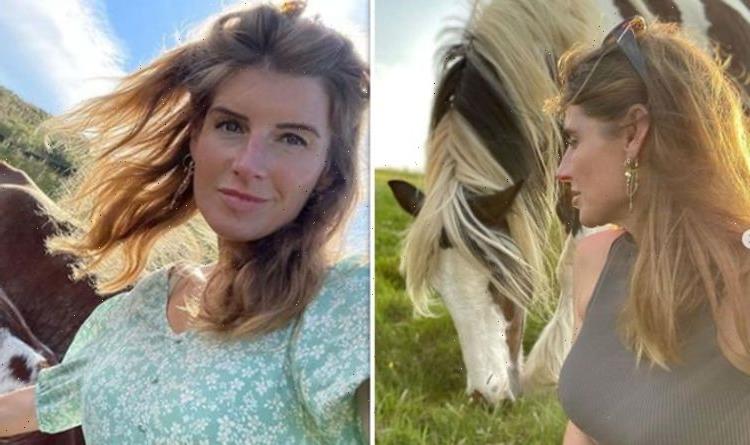 Our Yorkshire Farm star Amanda Owen and her children visited the Appleby Horse Fair last week. Taking to her Twitter and Instagram pages, the 46-year-old gave fans an insight into her trip to the annual event in Appleby-in-Westmorland in Cumbria.

At first, she shared various pictures from the fair, which consisted of visitors riding on horses and the event’s scenery.

The shepherdess followed up her post with pictures of her children enjoying their time at the fair.

She was also all smiles for the camera as she posed with different horses.

Amanda went on to tweet: “Back home bearing fruit from Appleby Horse Fair.

“A gift of a gorgeous crate of cherries brought by friends all the way from Kent.”

The television star visited the fair in the hope of getting a new horse.

Unfortunately for the mother-of-nine, the family came back without an addition to their farm.

Amanda wrote: “There was mounting pressure to find another horse at Appleby Horse Fair but, although we were champing at the bit we didn’t find quite the right one. #Applebyhorsefair.”

The farmer’s visit prompted many of her 174,000 fans to share their thoughts.

Many suggested that a new horse will not be like the family’s beloved pony Tony.

Others joked that Amanda’s husband Clive would not be impressed with her bringing home a new animal.

Fans also commented on the fun they had at the event, while others slammed the fair.

One penned: “I wouldn’t go there. I’ve seen how some treat the horses. Heartbreaking.”

A second added: “Plenty of horses and plenty of fighting by the sounds of things.”

A third wrote: “We went a few years ago now and saw a pony drown in the river, being ridden and bathed, horrendous and never again.”

Despite concerns, the RSPCA and other officers from animal welfare organisations were present at the fair.

Staff were on hand to provide advice and tips about their horses.

The annual event attracts thousands of people from the Gypsy and Traveller communities.

The number of people arrested for fair-related alleged offending this year was at its highest level since 2014.

Express.co.uk has contacted a representative for Appleby Horse Fair comment.