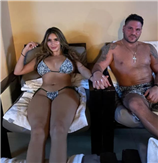 Ronnie Ortiz-Magro is reportedly out of a job.

But he doesn’t appear to be out of luck.

The troubled reality star hasn’t returned this summer to the set of Jersey Shore, prompting strong speculation that he’s been fired from the series after multiple arrest and wildly inappropriate social media posts.

Ronnie and his fiancee, Saffire Matos, spent at least some time over the weekend at a spa, donning matching bathing suits and having a very relaxed time.

Matos shared the experience on Instagram on Saturday, captioning the pictures above and below as follows:

“Spa days and self care.”

The outing came amid confirmation by a Sun source that Ortiz-Magro “is not filming” new episodes of Jersey Shore: Family Vacation.

“The cast started filming a little here and there two weeks ago, but now they are all filming full force, sans Ron,” alleges this insider, adding:

“There is no sign that Ronnie is joining, at least not anytime soon.”

To anyone that has been paying attention to the saga of this MTV personality, this should not come as a surprise. Far from it, in fact.

Earlier this year, Ronnie was arrested for domestic assault, with outlets reporting the victim was Matos herself.

Prior to this incident, Ronnie was arrested for domestic assault after allegedly holding ex-girlfriend Jen Harley hostage with a knife in October 2019 and swiping their daughter out of Jen’s arms.

Police had to eventually knock down the door of a home inside of which Ronnie had barricaded himself and had to use a taser on him to take Ronnie into custody.

Ortiz-Magro avoided jail after agreeing to a plea baragin many months later, however.

In May, meanwhile, Ronnie seemed to acknowledged a struggle with his own mentall health, writing on social media:

“Your mental illness is not a personal failure.”

We strongly agree with these statements.

A short time later, Ronnie confessed that he needed time away from Jersey Shore.

“After talking to the team at MTV, we have mutually agreed that I will step away from the show,” Ronnie began in May.

He will do so “while I seek medical treatment for mental health issues that I’ve ignored for too long.”

Added Ronnie at the time:

“My number one goal now is facing my struggles head on.

“This process will be difficult, but my #1 priority is to get healthy and be the best man and best father I can for my daughter.”

Let’s all hope Ronnie is serious this time around and really does take the steps necessary to be the most effective and loving dad he can be.

This likely won’t include any role on Jersey Shore going forward.