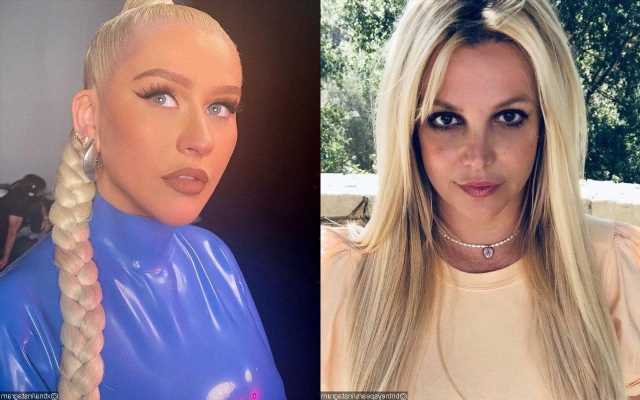 Alongside a clip from the ‘Hurt’ singer’s interview during a red carpet interview at the 2021 Latin Grammy Awards, the ‘Toxic’ hitmaker claims that her action is ‘equivalent to a lie.’

AceShowbiz –Britney Spears called out Christina Aguilera for not wanting to talk about her conservatorship in a recent interview. Making use of her Instagram account, Britney slammed X-tina and accused her of lying in a post on Friday, November 19.

Alongside a clip from Christina’s interview during a red carpet interview at the 2021 Latin Grammy Awards, Britney wrote on her Instagram Stories, “I love and adore everyone who supported me… but refusing to speak when you know the truth, is equivalent to a lie!!!!” The “…Baby One More Time” hitmaker further stated, “13 years being in a corrupt abusive system yet why is it such a hard topic for people to talk about??? I’m the one who went through it!!!!”

While Britney blasted Christina for dodging the topic of her conservatorship, she made sure to show her gratitude to those who have been supportive. “All the supporters who spoke up and supported me, thank you… yes I do matter!!!!”

In the said video from Thursday’s Latin Grammy Awards, Christina was asked if she had been in touch with her fellow pop star following the end of her 13-year conservatorship. The “Lady Marmalade” singer’s publicist then quickly chimed in, “No, we’re not doing that tonight. I’m sorry.”

As for Christina, she could be seen frowning before telling the reporters that she couldn’t answer the question. As she walked away from the press line, the “Hurt” hitmaker added, “But I’m happy for her.”

Fans, meanwhile, perceived this as the moment when the two 90s pop star reignited their past beef. “They been having beef since the 90s,” one person commented. “Lmfaooo I love 1990s beef,” someone else added, while another fan wrote, “The ‘Mickey Mouse Clubhouse’ beef is back.”

To be fair, Christina previously showed support for #FreeBritney movement. “These past few days I’ve been thinking about Britney and everything she is going through,” so Christina tweeted back in June alongside a throwback picture of them. “It is unacceptable that any woman, or human, wanting to be in control of their own destiny might not be allowed to live life as they wish.”

“Every woman must have the right to her own body, her own reproductive system, her own privacy, her own space, her own healing and her own happiness,” she added, referring to Britney’s claim that she was forced to wear an IUD to prevent her from having more children. “The conviction and desperation of this plea for freedom leads me to believe that this person I once knew has been living without compassion or decency from those in control. My heart goes out to Britney. She deserves all the TRUE love and support in the world.”