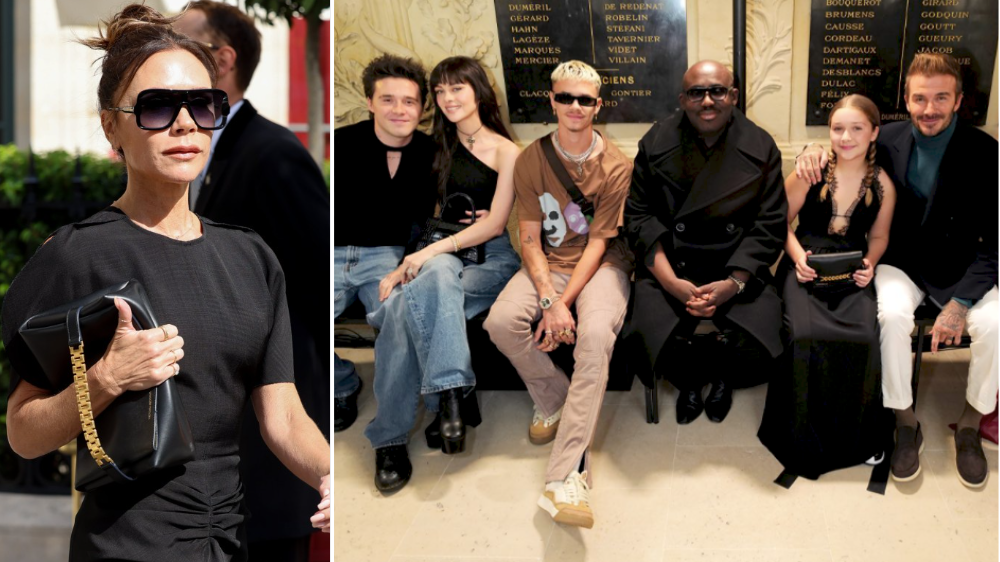 The Beckham family came out in force to show their support for Victoria Beckham’s Paris Fashion Week show – and eldest son Brooklyn was also in attendance.

Fashion designer Victoria debuted a new collection for her first PFW show and she had the full backing of her brood while doing so.

Husband David Beckham was in attendance, along with sons Romeo, 20, and Cruz, 17, as well as 11-year-old daughter Harper.

Despite rumours of a family feud rife following Brooklyn’s marriage to Nicola Peltz, it seems they’re putting it behind them after Victoria reportedly offered the lovebirds an invitation to her show as an ‘olive branch.’

It was initially thought that the budding chef and his actress wife weren’t going to attend, as they were noticeably absent from photos of the Beckhams leaving their hotel in the French capital.

However, a sweep snap shared by the Spice Girl after her show put the speculation to bed, as Brooklyn and Nicola sat beaming on the front row.

The couple rocked up in matching outfits, both wearing light-wash denim jeans with a black top and boots, with Brooklyn wrapping a protective arm around Nicola as his mum captured the shot.

Victoria captioned her post: ‘It’s Paris baby!! I’m so grateful for my family, @BritishVogue and @VogueMagazine for always supporting me on this journey xx VB’.

Walking in the show were the likes of Gigi and Bella Hadid, with eldest sister Gigi donning a chic black ensemble, while Bella wore vibrant green.

As for other guests, Victoria’s longtime friend Eva Longoria put in an appearance to cheer her on, as did model Poppy Delevingne.

It’s thought that Brooklyn and Nicola – who married in a star-studded ceremony in April – actually arrived to the event 30 minutes early to wish Victoria good luck, with Posh Spice later becoming tearful as she accepted applause on the runway.

A source told Mail Online: ‘There were a lot of smiles and a lot of love in the room, it was a lovely family atmosphere.’

Of course, hubby David wasn’t shy about showering his wife with love, sharing a snap on his Instagram Story of the mum-of-four preparing for her big moment.

’16 years of hard work and we know how much today means to you. We are so proud’, the football legend wrote.

Social media users commented on how ‘lovely’ it was to see the whole clan back together again, after a rift reportedly started around the time of Brooklyn’s wedding.

Originally, Nicola – whose father is billionaire tycoon Nelson Peltz – had planned to wear a VB dress for her special day, but apparently Victoria called her to say her atelier couldn’t make it after all, so Nicola wore a Valentino dress instead.

The 27-year-old recently publicly shut down the idea that the dress situation caused any drama, hailing Victoria and David as ‘great’ in-laws.

She told Grazia: ‘When I read things that say [things like] I was never planning on wearing a [Victoria Beckham] dress or things like that, it does hurt my feelings. I try not to let it, but it’s just not the truth. It’s just a bit of a bummer when you’re like, “Oh, people think that,” but it’s just not true.’

Brooklyn chimed in: ‘To be honest, my wife is obviously my first priority and I never want to see her upset ever. When people do say ridiculous things, we just talk about it and we just move on. We have each other’s back 100 percent and we just move on together.’