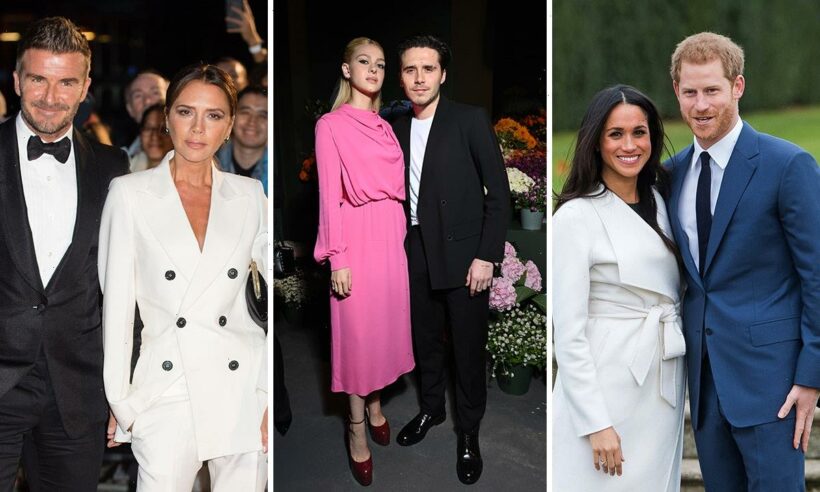 Brooklyn Beckham and actress Nicola Peltz finally exchanged vows on Saturday after having to delay their wedding due to the pandemic, and threw an extravagant bash to mark the occasion.

The newlyweds were married at the Peltzs’ £76million family home in Palm Beach, Florida and were joined by plenty of celebrity guests, including Serena and Venus Williams, Gordon Ramsay and Eva Longoria.

David gifted the happy couple a stunning electric vintage car, a 1954 Jaguar XK140 Open Two Seater. And the stylish motor, which has been electrified by car restoration company Lunaz, looks like it could belong in a James Bond film.

The lavish present seems directly inspired by the one-off 1968 Jaguar E-Type used by Prince Harry to whisk his new bride away to their evening reception at Frogmore House. The car had also been converted to be fully electric.

RELATED: Meghan Markle and Prince Harry’s sweet wedding detail you might have missed

The Duke and Duchess of Sussex’s stylish car of choice has clearly set a precedent for David, who is actually one of Lunaz’s investors. He attended Harry and Meghan’s fairy tale wedding, alongside wife Victoria, back in May 2018 at Windsor Castle.

Brooklyn and Nicola’s clean-air classic is a gorgeous light blue shade with a contemporary cream interior. The bespoke motor, built in Silverstone, is the product of thousands of hours of work, put in by Lunaz’s team of 120 craftspeople, designers and electric vehicle technicians.

“In creating this beautiful, electrified Jaguar XK140, we are honoured to bridge the gap between David Beckham’s professional life, where he is an investor in Lunaz and his family life,” said David Lorenz, founder & CEO of Lunaz.

He continued: “This remarkable car is the perfect gift to his son Brooklyn and daughter-in-law, Nicola on their wedding day. In every respect, this extraordinary electric classic car by Lunaz symbolises a bright, positive future.”

Make sure you never miss a ROYAL story! Sign up to our newsletter to get all of our celebrity and royal news delivered directly to your inbox.