London: A “fanatical Islamist”, who was inspired by Islamic State, has been found guilty of murdering British lawmaker David Amess, who was knifed to death in a frenzied attack inside a church where he was meeting voters. 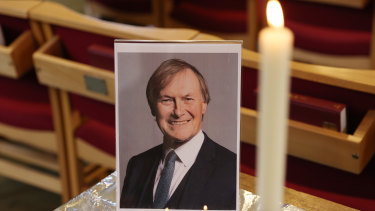 A portrait of English MP David Amess. A man has been found guilty of his murder.Credit:Getty

Ali Harbi Ali, 26, a British citizen and son of an ex-media adviser to a former prime minister of Somalia, repeatedly stabbed Amess in an attack last October for what he said was revenge for the lawmaker’s support for airstrikes on Syria.

Prosecutors said he was a “committed, fanatical, radicalised Islamist terrorist”.

“This was a horrific act of terrorism motivated by religious and ideological beliefs,” said Nick Price, head of the Crown Prosecution Service’s Counter Terrorism Division. “Ali chose to commit this abhorrent crime for his own selfish and hateful reasons.”

Ali was found guilty of murder and preparation of terrorism at London’s Old Bailey court after the jury took less than half an hour to reach a verdict.

The killing of Amess, 69, a married father of five children and a member of Prime Minister Boris Johnson’s Conservative Party, sent shockwaves through Westminster and led to calls for better security for members of parliament (MPs), coming just five years after another lawmaker was murdered.

British lawmakers regularly hold “surgeries”, or one-to-one meetings, with voters in their constituencies, a tradition considered a bedrock of democracy. But with little or no security and an emphasis on access for all, surgeries can make lawmakers vulnerable.

Ali told detectives he had spent years planning to kill a lawmaker and had previously carried out reconnaissance at the Houses of Parliament, and of two other MPs, including cabinet minister Michael Gove.

He said he had “bottled” previous attacks and had settled on Amess because he was “the easiest”, he told police in interviews. He also mentioned the lawmaker’s membership of the Conservative Friends of Israel Group.

The killer told the court he had wanted to join Islamic State and believed his actions would help Muslims, describing himself as “moderate”.

“If I thought I did anything wrong, I wouldn’t have done it,” he told the court. Ali will be sentenced at a later date.