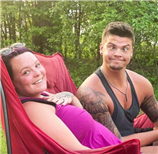 Catelynn Lowell and Tyler Baltierra have a newborn at home, and couldn’t participate in the latest Teen Mom screaming match.

But Catelynn still has social media to reach fans.

This week, she gave Tyler a shoutout as he crossed a major milestone — turning 30 years old.

“We are so blessed to have you in our lives,” she gushed, speaking on behalf of herself and of their children.

Catelynn then praised: “30 looks DAMN good on you.”

Tyler’s birthday was on Wednesday, January 12.

Catelynn shared a series of photos, most of which were throwbacks.

The first few flashed back to their teens, while the rest showed off the couple’s children, highlighting Tyler’s role as a loving father of Novalee, Vaeda, and Rya.

While some commenters echoed Catelynn’s birthday wishes and adored the kids (including 4-month-old Rya), others weren’t too pleased.

“She always finds a way to point out that they have sex,” scoffed one critic. “’Lover.’ It’s so weird.”

Another commenter simply opined: “So much cringe.”

“I haaaaaate hate the word lover,” announced another detractor.

(We’re reminded of the 30 Rock joke, hating the word “lover” unless it’s between the words “meat” and “pizza”)

That same commenter continued: “But I actually think this is less awful than her usual captions about him overall?”

“I wish she’d stop referring to him as her lover in posts,” yet another social media user griped.

“I f–king hate how they talk about each other,” expressed one outraged critic who was clearly on their last nerve.

“Even Farrah’s bathroom activity doesn’t make me squirm as much as the lovers and the basting,” the commenter declared.

We can all be grownups enough to acknowledge that Tyler Baltierra is hot.

One might almost say that Catelynn “got lucky” in the baby daddy department, because many of her castmates were with less compatible, less hot partners.

But let’s not call anyone who rose to fame by giving birth in high school “lucky.” If Catelynn were “lucky,” we would not know her name.

With those caveats out of the way, yes, Tyler is definitely on the “hot” spectrum of Teen Mom dads.

And since he’s not an unhinged monster, Catelynn definitely hit the jackpot.

It makes perfect sense that she would be happy to gush about the man she loves, especially on his birthday.

Some of this “discomfort” that commenters and critics were expressing is clearly rooted in diction.

A lot of people do not like the word “lover” unless it’s a lyric in a Spice Girls song.

Just as many people dislike the word “moist” to the point that their skin crawls, the word “lover” can be a turn off … to some people.

Some of them might be bitter that she’s happy and they’re not. Others just, well, dislike her.

You can’t please everyone. Complimenting your spouse isn’t a bad way to tick people off.