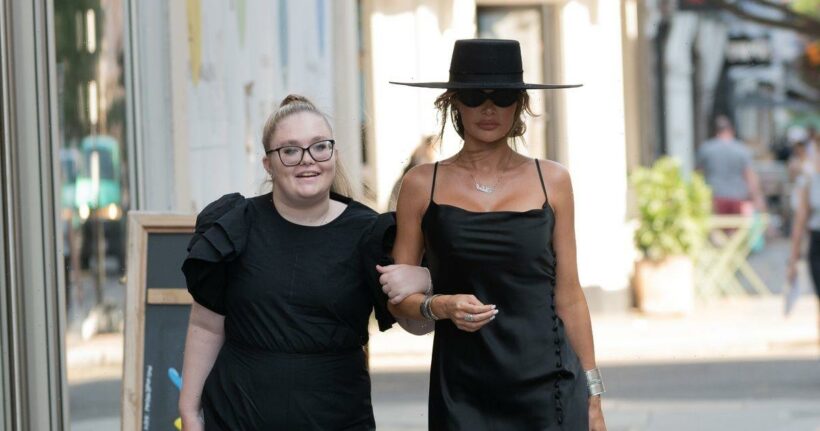 Chloe Sims looked every inch the TV star as she hit the shops with here daughter Maddie ahead of the National Television Awards on Thursday.

The 39 year old TOWIE star wore a slim black satin dress with a thigh high split as she was out for a walk in London's West End.

She matched the all black look with a fedora and cowboy boots for the trip out.

Maddie, 16, also sported a black ensemble with frilly puffed sleeves, paired with matched with white trainers. She also added a pop of colour with a bright yellow handbag.

Their outing comes after Chloe has her say on the TOWIE bosses' decision to axe multiple cast members.

"A lot of the cast who have left had private relationships off TOWIE and that doesn't really work because you have to share everything. I’ve been an open book and shared the ups and all the downs – and there’s been a lot of them."

Chloe is set to appear on the new season airing on ITVBe this Sunday at 9pm.

When asked if she feared getting axed from the show, she replied: "Of course not. I knew I was coming back. I’m Chloe Sims. You’re joking. I’ve been here for 11 years. I wasn’t scared about the cull, let’s put it that way."

Chloe’s time on the show has included a number of ups and downs including heartbreaks.

Chloe revealed she’s planning to be more cautions when it comes to future romances and plans to keep things private until the right time.

She said: "I’m single as it stands, but I just said to TOWIE that I feel like moving forward any romance I’d only share it if it was really serious.

"I feel like in the past I’ve rushed and told everyone everything on my mind and it goes wrong."

For the latest TOWIE news, sign up to OK!'s daily newsletter.