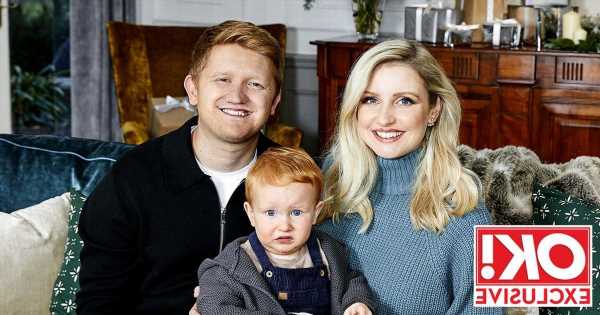 Back in October, Coronation Street actor Sam Aston announced the wonderful news that he and his yoga teacher wife Briony were expecting their second child together.

And now the couple have exclusively revealed to OK! that they will be welcoming a baby girl in May next year. See all the pictures from our gorgeous Christmas shoot – and read Sam and Briony's full interview – by signing up below for free.

Are you an OK! VIP If not, why not? It’s free and gives you backstage access to stories like this, exclusive home tours, special discounts and so much more! All you need to do is pop your email address below! P.s. if you’re already seeing this article in full, congrats – you’re already on our guest list! There’s plenty of excitement in the air during our festive shoot with Coronation Street actor Sam Aston and his wife Briony – and it’s not just because Christmas is around the corner.

After recently announcing they’re expecting their second child together – a sibling for their 16-month-old son Sonny – the couple are thrilled to exclusively reveal they’re having a little girl!

“I could see us having another boy, so it was a really nice surprise,” says Sam, 28, who has played Chesney Brown on the Cobbles since 2003.

But while they may soon be parents to a boy and a girl, that doesn’t mean the pair plan to stop at two children, especially if yoga teacher Briony, 26, who is due in May, has anything to do with it.

“After we found out we were having a girl, we got back in the car and Sam tried to give me a fist bump, and said, ‘Cheers to completing our family!’ I was like, ‘No, no, just because we’ve got one of each that doesn’t mean we’re done!’” laughs Briony, who is the co-owner of the Happy Baby Studio.

But one thing is for certain, the couple will be hoping for a smoother labour this time around after Sonny made his entrance into the world six weeks early.

“I’d love a home birth if possible, but because of last time I’m open to all options. I know anything could happen,” says Briony. “No matter what, we’re still feeling positive about it.”

Here, Sam and Briony open up about their excitement at expecting a daughter, how Sam reacted to news of baby number two, and share their plans for Christmas…

Congratulations on the news you’re expecting a girl!

Briony: Thank you! It’s so exciting. We would have been pleased either way, but it’s really amazing. We feel very lucky we’ll have one of each.

Sam: I could see us having another boy, so it was a really nice surprise. I was quite shocked. I don’t know why, because it’s a 50/50 chance! We booked an early gender reveal 4D scan at a place called Instascan 4D Baby in Padiham.

There are twins in Briony’s family, so when we went in I was a bit nervous and said, “There’s definitely only one in there, right?” He said, “There’s only one!” and then told us it was a girl!

Why did you want to find out what you’re having?

Briony: I wanted to get prepared around the house, get excited and get some girlie bits. We can also prepare Sonny for when he’s a bit older. I don’t think I could have waited.

I don’t know how people do it! I’m too impatient. With Sonny we found out, and we only had one boy’s name we liked and no girls’ names.

This time we have a girl’s name but no boys’ names, so I think it’s meant to be. But it was a big surprise finding out I was pregnant again, so we feel very lucky.

So you weren’t trying?

Briony: No, we were actually trying not to get pregnant! [Laughs] Just because Sonny was so premature – my concern was having two too close together and having another premature baby. But it just happened!

Like with Sonny, I just knew I was pregnant – something was a little bit off and I didn’t feel well. I took a test and obviously it was positive. It was a bit of a shock for Sam!

How did you tell Sam, Briony?

Sam hadn’t been well and he was in bed, so I asked how he was feeling and if I could get him anything. He asked for some water.

Last time, when I told him I was pregnant with Sonny, I made him eggs and put them on a board that read, “Daddy, you’re a good egg,” so I put the water on that same board and I put Sonny on my hip holding the pregnancy test.

I went into the room and I said, “I’m pleased you’re feeling a bit better because…” and I just passed him the pregnancy test!

I think his exact words were, “Are you having a laugh?” He said, “We need to burn that wooden board because every time I see it there’s a pregnancy test!”

Sam: It was said in a joking way! It’s fantastic news. It sounds like I wasn’t pleased but I really was. It’s just that with Sonny it was as planned as it could be, whereas this happened out of the blue.

Briony: Yes, but we wanted more anyway. I think the universe has its ways and it’s happened for a reason. We don’t have the worry of trying, which is nice.

Sam: It will be nice with them growing up being so close in age and being able to play together.

How have you been feeling, Briony?

I’ve been fine and everything has been going well. I’ve felt more sick this time, just nauseous and more tired, but I don’t know if that’s just running around after Sonny. That’s why I knew we were having a girl as I felt different to when I was pregnant with Sonny.

Sonny was six weeks premature. Do you have a birth plan this time or are you just going to see what happens?

Sam: Plan A would be to have a home birth.

Briony: That’s what I wanted with Sonny, an at-home water birth. I’d love a home birth if possible and I think that would be really nice and calm, but because of last time I’m open to all options. I know anything could happen.

Sam: Yes, we’ll prepare for all options. You can plan and plan and then it can go out of the window, as we learnt last time. But it’s not all doom and gloom, we know it can still be a positive experience. We’ll just have to wait and see what happens, but hopefully Briony goes full-term this time.

Briony: No matter what happens, we’re still feeling positive about it.

So you’re not nervous, Briony?

No. I’m actually really excited. I teach hypnobirthing classes and that’s really helped me to feel positive and empowered, and as prepared as I can be. I keep having dreams that I’m giving birth and it’s really exciting!

How are you feeling about having two under two?

Briony: It can’t really get any more chaotic…

Sam: We say that, but let’s see! If Briony goes full-term there will be 21 months between Sonny and the new baby.

We’re not naïve to the fact it will be hard and challenging at times, but the joy they bring outweighs that. I’m one of nine and we all turned out alright, so I’m sure we’ll be fine! It’s hard to put into words when you talk about your love for them.

Sonny is at that age now where he’s growing into a real cheeky chappie. He’s so funny – he’s learnt how to stick his tongue out at us and tries to make us laugh. It’s amazing.

How do you think he’ll be as a big brother?

Briony: He’s very caring, and we’ve got him a little doll to try to help prepare him. But at the minute he keeps swinging it around!

Sam: We’ve been trying to explain to him to be gentle with things for the baby. He keeps putting his head on Briony’s belly and saying, “Baby”.

Briony: But to be fair he has also been lifting up my dad’s top and saying, “Baby!” [Laughs]

Sam: He’s very loving with our dog Piper, so I think he’ll be fantastic when the time comes.

Was everyone at Coronation Street thrilled for you, Sam?

Yeah, everyone has been so kind and supportive. In a way I don’t think people were too shocked.

I think people know us, and us now being on baby number two, they’re thinking we’re going to be going for double figures or something daft – but that’s definitely not happening!

Briony: We don’t plan on beating his parents, that’s for sure! It all depends on how many we can fit in a car – I’d like to fill a car!

Sam: I think two under two is going to be enough chaos for the foreseeable and then we’ll see.

Has anyone at work given you any advice on juggling two children?

Sam: I’ve asked Andy Whyment a few questions and he’s been great. He has Tom and Hollie, and their gap is quite similar. He was really happy for us.

He’s always a great friend and support system, and we talk a lot outside of work. I think I may also have to call Brooke Vincent for some tips as she has a similar age gap, too.

What are your plans for this Christmas?

Sam: We try to alternate it between seeing my family and Briony’s family, and this year we’re spending it with Briony’s parents.

With my family it’s tricky as there’s so many of us, so it moves around the houses each year – one year I will host, then another sibling, and so on. This year my sister is hosting, and depending on what happens with Covid there will be 27 of them!

Briony’s parents will be a much more chilled affair. Briony’s mum loves to host and she does a very good job. There’s no cooking or cleaning, it’s just the ultimate chill-out and you completely switch off.

Become an OK! VIP and get all of our exclusive interviews, videos and stunning photo shoots sent straight to your inbox every week!

You'll receive an email with stories exclusive only for OK! VIP members, including celebrity house tours, baby reveals, wedding snaps and so much more!

Will this one feel extra special as Sonny is older?

Briony: Yeah, he absolutely loves the tree and the lights. He keeps pointing at the Santa we have in the living room and we’ve got him a plate to put out for Father Christmas on Christmas Eve, so he’s much more into it this year.

Last year he could just about hold his head up, and next year we’ll have another like that! It’s crazy to think we’ll have two next Christmas.

What’s your favourite thing about the festive season?

Briony: Christmas Day itself is nice but I love the build-up. We have two trees and we put them up in November. I love going to see the Christmas lights and taking Sonny to the garden centre. We always watch The Grinch, too!

Sam: I love cosying up by the fire and watching loads of Christmas films, and eating food that’s probably not very good for you.

We always have two weeks off for Christmas at Corrie – we know we’re going to get them and it’s lovely to have that quality family time. It’s my favourite time of year.

For the latest celebrity exclusives and interviews, sign up to OK!'s daily celebrity newsletter.