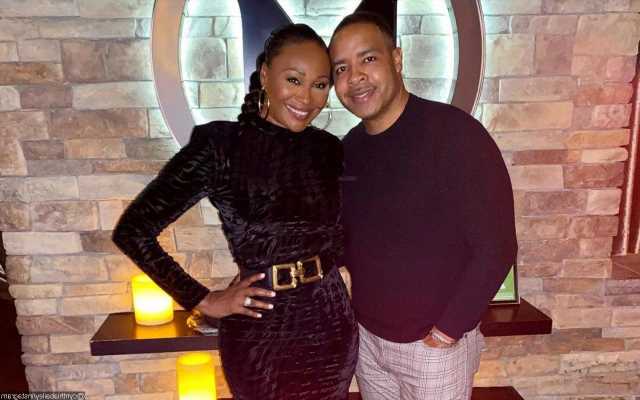 Spotted with her sportscaster husband together after he was accused of sending nudes to another woman, the ‘Real Housewives of Atlanta’ star insists they are ‘great.’

AceShowbiz –Cynthia Bailey isn’t letting some anonymous woman ruin her relatively new marriage. Though she admitted that the rumors are “annoying,” she appeared to be fully supportive of her husband Mike Hill, who is accused of cheating on her.

The Bravo star was met by TMZ at LAX on Tuesday, November 2. Seen together with her husband for the first time since the rumors surfaced, she agreed with the videographer who called the rumors “super annoying.”

“Yup, very annoying,” she echoed the videographer walking calmly walking into the airport to check in. Asked how they are doing amid the rumors, the model/actress insisted, “We’re great,” before adding, “Rumors are rumors.”

Mike, who was walking a few steps behind Cynthia, additionally said the allegations are “stupid” and “not true.” He said he’s considering to take legal action if the accuser continues spreading the rumors, stating, “We’ll take care of it the way it’s supposed to be taken care of.”

As for the identity of the person who brought up the cheating allegations, he said he has “no idea who it is,” but he hopes the person “gets help.”

A Twitter user, who goes by ALIST premium, previously claimed that Mike tried to cheat on Cynthia and flirt with her by sending her nudes. Trying to prove her claims, she shared screenshots of the profile of Mike’s alleged Snapchat and their conversation.

The person later shared a side-by-side comparison of the nude pic and a screenshot from the sportscaster’s Instagram Story that showed him wearing what appeared to be the same clothing and sitting in a similar chair. The tweets and the accuser’s account, however, have since been removed.

Mike was also quick to respond to the allegations. “Please don’t believe bs,” he reportedly said when contacted via DM. “Not exposing me cuz THAT’S not ME.” He hinted that he’s considering to take legal action as adding, “Don’t know this person or why they’re doing this but my lawyer has been contacted.”

When pressed that Cynthia didn’t deserve to be treated poorly like that, Mike stressed, “I wouldn’t do her like that. That’s dumb. Far from it. Just someone who hates progress or I pissed off making up stuff. Well, not from MY account and that pic is NOT mine. I know that I look like. Thank you.”

The talk show host went on claiming that his relationship with his wife is still okay as she believes him. “We’re good,” he stated. “Cynt doesn’t believe it. She knows what I look like. She knows I don’t use snap. Only God can separate us.”