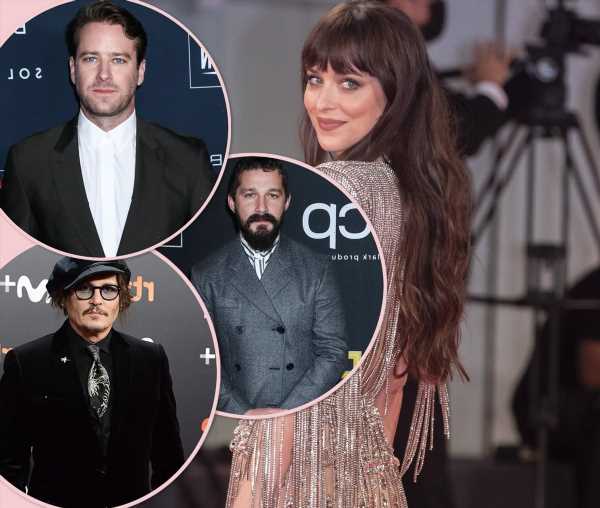 Dakota Johnson has some thoughts about cancel culture.

In a profile with The Hollywood Reporter that dropped Tuesday, the 32-year-old actress touched on seeing some of the biggest names in Hollywood get canceled in the #MeToo era, like her former co-stars Johnny Depp, Armie Hammer, and Shia LaBeouf.

As you may know, all three men have faced serious accusations of abuse by a partner. But how does Dakota feel about everything that has come to light about her colleagues? Well, the Fifty Shades of Grey alum ultimately thinks the whole thing is “sad” all around, saying:

“I never experienced that firsthand from any of those people. I had an incredible time working with them; I feel sad for the loss of great artists. I feel sad for people needing help and perhaps not getting it in time. I feel sad for anyone who was harmed or hurt. It’s just really sad.”

Most recently, she starred alongside LaBeouf in the 2019 film The Peanut Butter Falcon. His former girlfriend FKA Twigs filed a lawsuit against the Even Stevens alum in December 2020, accusing him of sexual battery, assault, and infliction of emotional distress. Furthermore, she claimed he knowingly gave her a sexually transmitted disease and abused her multiple times during their relationship. Shia at first seemed to acknowledge the claims with a shrugging statement — before denying the accusations later.

Dakota also worked with Hammer in 2019 on the horror film Wounds (though they were both in The Social Network in 2010, they never shared any scenes). Since then, Hammer has been accused of rape and sexual assault after his disturbing direct messages were leaked on social media. The alleged DMs included sexual desires of rape, cannibalism, and violence. He also has denied the claims and sought treatment for drug, alcohol, and sex issues back in June.

Then, in 2015, she and Depp starred in Black Mass just before his ongoing legal battle with Amber Heard started over alleged verbal and physical abuse. And let’s just say the matter has been messy ever since.

Despite all the allegations against the guys, Melanie Griffith’s daughter explained to THR that she believes “people can change” — but aren’t being given the opportunity to do so when they’re simply canceled, saying:

“I want to believe in the power of a human being to change and evolve and get help and help other people. I think there’s definitely a major overcorrection happening.”

Instead of completely ending someone’s career, Dakota thinks “there’s a way for the pendulum to find the middle,” explaining:

“The way that studios have been run up until now, and still now, is behind. It is such an antiquated mindset of what movies should be made, who should be in them, how much people should get paid, what equality and diversity look like. Sometimes the old school needs to be moved out for the new school to come in.”

She then ended on this note:

“But, yeah, cancel culture is such a f**king downer. I hate that term.”

What do YOU think about her statements on cancel culture, Perezcious readers? Do you think she was defending Shia, Armie, and Johnny? Let us know in the comments (below).