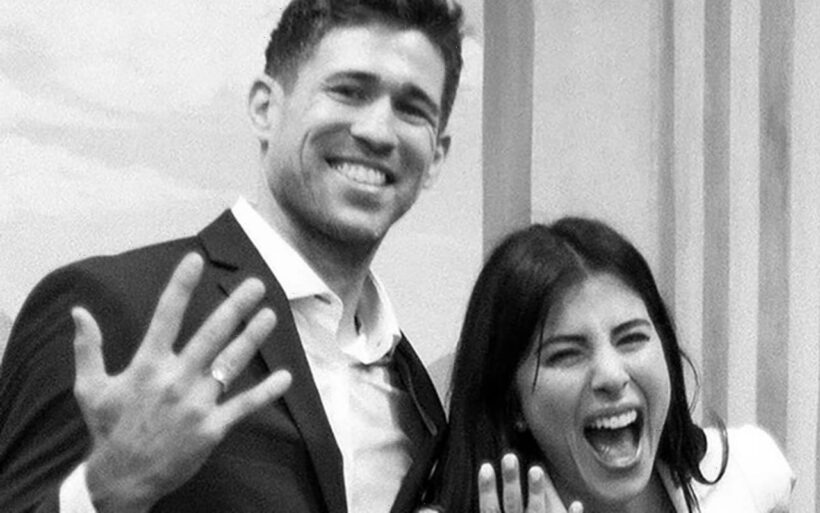 Daniella and Andrew got engaged in December 2017 after he popped the question by carving ‘Marry Me?’ on a tree outside their home in Studio City, California.

AceShowbiz –Daniella Monet has finally tied the knot with Andrew Gardner. The Trina Vega depicter on “Victorious” announced the exciting news on Saturday, December 31, five years after they got engaged.

Making use of Instagram, the 33-year-old shared a black-and-white photo of her and her husband kissing in an elevator. She followed it up with pictures of the two while exchanging vows.

In her last post, Daniella and Andrew were seen smiling ear-to-ear as they flashed their rings. The Rebecca Martin depicter on “Zoey 101” captioned the three posts by writing, “22, “29” and “12” respectively, referring to their wedding date.

Daniella and Andrew got engaged in December 2017 after dating for six years. Andrew popped the question by carving “Marry Me?” on a tree outside their home in Studio City, California.

When recalling the proposal, Daniella shared to PEOPLE, “We woke up Christmas morning, and we were getting ready for the day, and Andrew said we should take a family picture with the two dogs.” She added, “So I got my hair and makeup ready and got dressed and I thought, ‘Oh, I’ll make a little vlog out of it.’ “

“So I had my camera going for the whole time, and after we were done opening presents, he blindfolded me and walked me over to the kitchen sink, where there’s a beautiful tree outside of the window,” she further recounted. “I didn’t see anything. I was so confused. I didn’t know what I was looking for. I thought maybe he had our bikes on the driveway.”

“Eventually I noticed there was a bow at the bottom of the tree, when I peeked over. And then I finally saw that there was ‘Marry Me’ carved into the tree with a heart with an arrow going through it,” the former Nickelodeon star continued. “My heart sunk, my stomach dropped, everything just felt numb, and I lost it. I just was hysterical.”

Daniella and Andrew share two kids together. They welcomed their first child, son Gio, in September 2019 and welcomed their daughter Ivry in February 2021.