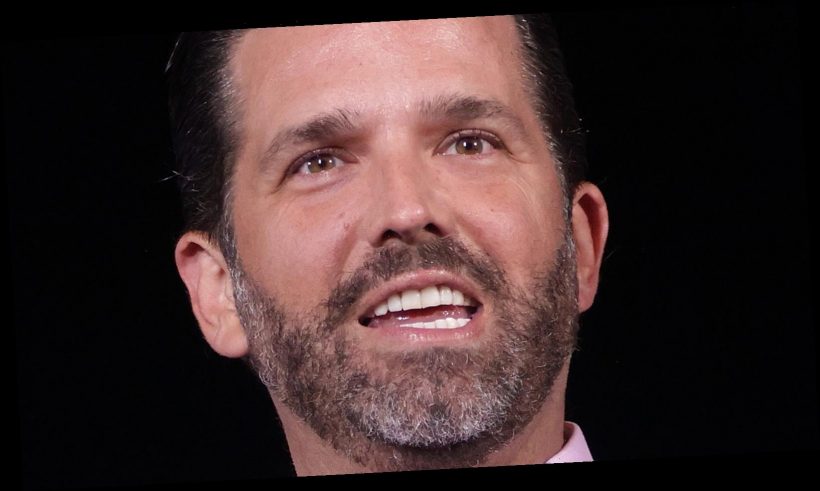 Nearly four months after his father left the presidency, Donald Trump Jr. has made something of a career out of criticizing any policy or action that could possibly be labeled “liberal.” His Twitter feed and Rumble videos are devoted to his negative opinions on Hollywood, “cancel culture,” and most especially, President Biden. He’s mocked the president for both verbal and physical slips, and denounced Biden’s reversal of his father’s policies, particularly ones related to immigration.

His latest target: The “vaccine passport” – a proposed system under which people could travel domestically and internationally with an official proof of vaccination against the COVID-19 virus (via USA Today). It’s thought to be similar to the policy certain countries already have requiring international travelers to show proof of vaccinations for smallpox and yellow fever. To the former first son, however, the policy is nothing less than an assault on American freedom. He posted a link to his latest Rumble video on Twitter, captioning it, “Vaccine passports? Communist China would be proud of the Democrats[‘] recent push. My thoughts.” The video itself is titled “The Latest Liberal Plan Is Straight-Up Un-American,” with the sub-hed “Covid Passports are just another way that the government is trying to control you.” In his three-and-a-half-minute video, Don Jr. decries the idea of requiring a passport “to travel freely within America…but [the left says] you shouldn’t need an ID to vote for the leader of the free world!”

The tweet was, as always, met with both support and pushback. Many users made reference to the fact that President Trump’s anemic response to the pandemic contributed to its spread and the deaths of more than a half million Americans. A representative comment: “America wouldn’t be considering vaccine passports if Trump had actually listened to the experts.” Other respondents argued that inoculation proof requirements already exist: One pointed out, “Don’t your kids go to schools that require vaccines?” Another added, “Recall that when I went to school you needed to show that you had Polio Vaccination. No one thought that not having another child give your child polio was bad.”

Others objected to Don Jr.’s phrasing. “Not everything you don’t like is communism, Don,” said a respondent.  Another user noted that Americans already have plenty of identity requirements: “I have to show ID to buy guns, lottery tickets, enter a bar, fly on a plane, get a job, drive a car, pay my taxes, vote, but a card to prove I have had a shot, that could help open the country back up and provide thousands of jobs in the tourist industry is communist? Sure.”

An interesting response came from someone who doesn’t see this as an either/or proposition. Journalist Lloyd S. Carroll wrote: “If we want to have [voter] ID laws then I don’t see anything wrong with a vaccine passport. The most important thing is to beat this pandemic and get our lives back. I consider this an extension of Operation Warp Speed.”